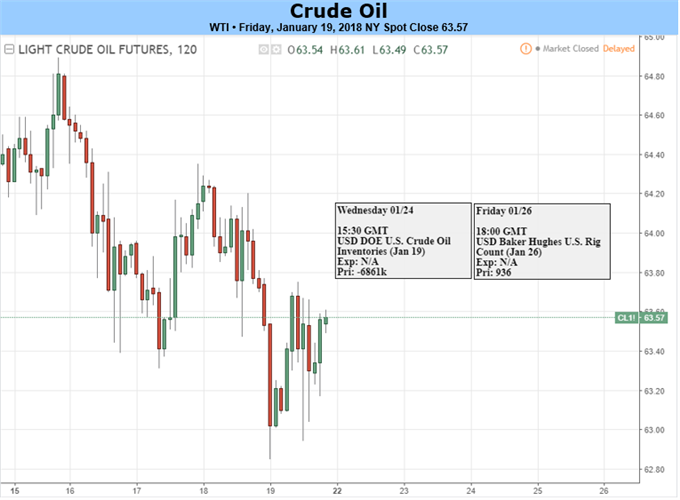 The broader outlook for crude remain constructive as the Organization of the Petroleum Exporting Countries (OPEC) and its allies prolong the production cuts from 2017, but the ongoing expansion in U.S. output may continue to drag on oil prices as the International Energy Agency (EIA) warns ‘explosive growth in the U.S. and substantial gains in Canada and Brazil will far outweigh potentially steep declines in Venezuela and Mexico.’

With field outputs bouncing back in the week ending January 12, the U.S. Energy Information Administration (EIA) now projects ‘total U.S. crude oil production to average 10.3 million barrels per day (b/d) in 2018, up 10% from 2017.’ Higher energy prices may continue to fuel non-OPEC production as ‘seven new oil-producing projects are slated to come online by the end of 2019,’ and market participants may pay increased attention to the ongoing expansion in U.S. supply as the figures are expected to exceed the previous record of 9.6 million b/d set in 1970.

In response, OPEC and its allies may keep the door open to extend the rebalancing efforts beyond 2018 as the group meets in Oman this weekend, but signs of growing supply may keep crude oil prices under pressure especially as recent price action highlights the risk for further losses. Interested in having a broader discussion on current market themes? Sign up and join DailyFX Currency Analyst David Song LIVE for an opportunity to discuss potential trade setups! 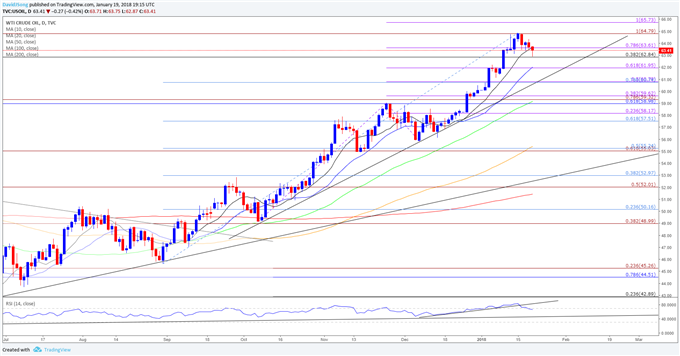 Downside targets are coming back on the radar for USOIL following the failed attempt to close above the 64.80 (100% expansion) hurdle, with oil prices at risk for further losses as the Relative Strength Index (RSI) finally slips below 70 and flashes a textbook sell-signal. A break/close below 62.80 (38.2% retracement) raises the risk for a move towards the 62.00 (61.8% expansion) handle, which largely lines up with trendline support. Next region of interest comes in around 60.80 (78.6% retracement) followed by the former-resistance zone around 59.00 (61.8% retracement) to 59.60 (38.2% expansion). Interested in trading? Review the ‘Traits of a Successful Trader’ series on how to effectively use leverage along with other best practices that any trader can follow.