A Look Inside Bitcoin Traders’ Minds During the Cryptocurrency Crash

When it comes to biases, everyone has them. One major factor which differentiates those individuals who are able to successfully navigate markets from those who aren’t, is the awareness of these biases and the ability to either cope with them or change their behavior entirely.

As insights from behavioral finance reveal, biases often reveal themselves when investors are under duress; in other words, when their financial assets lose value.

To this end, Bitcoin, Etherium, Ripple, and other cryptocurrency traders are just like FX, bond, stock, or commodity traders – they’re human beings exposed to the follies of human emotions and biases. All traders, regardless of asset class, are prone to acting on their biases during periods of duress, like when Bitcoin fell over -50% from its December 2017 high to its January 2018 low this week. 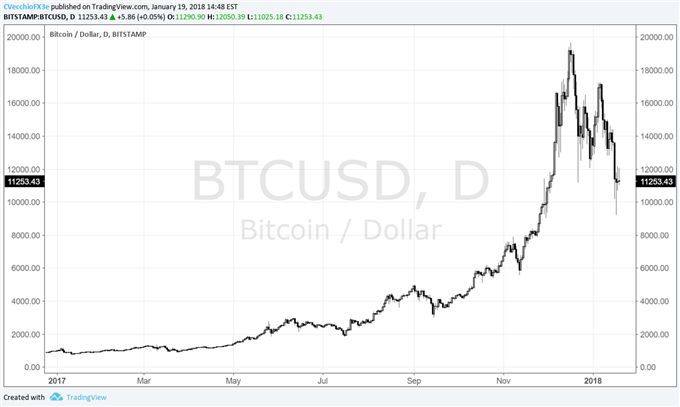 Biases manifest themselves in all sorts of different ways. We’ve chosen to look to social media and the internet to find examples of how various individuals are coping with the recent Bitcoin and cryptocurrency market crash. Intentional or not, various biases easily show through comments made on Twitter or posted on Reddit.

For the sake of demonstration, we’ve cherry picked a few comments that best embody the bias being examined. Likewise, we’ll look at ways to combat these biases when they manifest themselves in the future.

This is the tendency to think we could have foreseen an event happen once it’s happened (I knew it all along!). It happens to the best of us, but the difference between a seasoned trader and the less-experienced trader is the ability for the seasoned trader to recognize that they probably didn’t know in advance.

Example: “You could see this bear market approaching at the end of [December]. The signs were all there. When [Bitcoin] failed to hold at 18000 it was obvious this downward spiral would happen.”

When you have this experience, you have to look at the market through the lens of your trading methodology and ask yourself, did my analysis really tell me in advance an event or market-move was going to happen? If you answer this question objectively you will find that the answer is often times – “no”. By answering this simple question, you can substantially alleviate any frustration which might initially arise due to missing the ‘perceived’ opportunity.

Reducing frustration is crucial to successful trading, as frustration does nothing more than lead to poor decisions and more frustration, and then ultimately more poor decisions – a vicious cycle we of course want to avoid. If, however, your analysis foretold the market-move and you didn’t capitalize on it, then you have to get to the bottom of why you didn’t execute the trade.

This is the tendency to seek out or only interpret new information which confirms an idea or trade you are involved with. A large part of this stems from the fact that as humans we don’t like to be wrong, or at least admit when we’re wrong.

Example: “Been saying for months, these currencies will never be adopted by major corporations...Two large down days presents a huge problem for its future...I'd get out everything I could right now if I were still in."

The more experienced you become as a trader, the less likely you are to suffer from this bias. To overcome this particular bias, it is important you are cognizant of your search and acceptance of only information which provides the confirmation you are seeking. When you recognize the situation, take a minute to examine the other side of the market just as we discussed above regarding directional bias.

Use a ‘mental mirror’ if you will, and take an objective look at what you see. You might even find that the case to take the opposite view is stronger than the one you currently hold. In the example above, one might retort that Bitcoin is still up over +1000% since the start of 2017, making the recent -53% correction seem quaint.

This is the belief that streaks must come to an end. It’s like betting on red in roulette because black has come up X number of times in a row. It must come up red, right? At some point, yes. But it may not come until after suffering a significant loss of monetary and psychological capital. Both of which you need to learn to deal with properly.

While it is true that the longer a streak extends the closer it is to ending, it also true that it can go on a lot longer than you think or can withstand in terms of losses. This is why it’s good practice to be patient when looking for the end of long streak, and let momentum turn before taking action. By waiting for momentum to reverse, even if it only proves to be temporary, you at least have a fighting chance of correctly identifying the turn.

Another factor to consider is: if the trend is strong enough the most violent portion of the streak may not come until the very end as one side of the market capitulates. This is where the largest amount of money can be lost in the shortest amount of time. Simply staying on the side of momentum is the easiest way to avoid falling into the trap of thinking mean reversion is a guaranteed outcome; just because a coin flipped lands on ‘heads’ 10 times in a row doesn’t increase the odds that the eleventh flip will be ‘tails.’