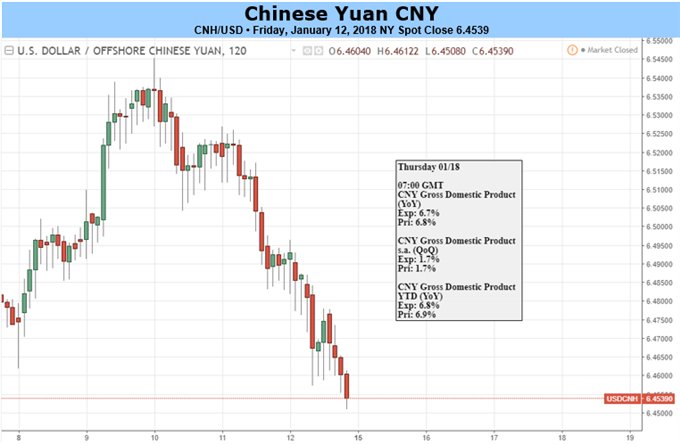 What is the #1 mistake that trades make, and how can you fix it? Find out here!

The Chinese Yuan was on a roller-coaster ride this week: it plunged -0.56% against the U.S Dollar on Tuesday following PBOC’s comments on the new Yuan managed regime; on Wednesday, as a rumor hit the wire that China may slow or halt purchases in U.S. treasury, sell-off in the Dollar began and helped the Yuan bounce back; after the Chinese FX regulator denied the report, Yuan’s rally suspended amid the recovery in the Dollar; Finally, on Friday, the flat US CPI print and better-than-expected Chinese trade report sent the Yuan (USD/CNH) to a four-month high. Looking forward, China’s fourth-quarter Gross Domestic Product (GDP) report, fix investment gauges and regulator’s guidance could be top drivers for the Yuan.

Next Thursday, China will release the GDP prints for the last quarter and the last year. China’s Premier Li Keqiang told that he expected the Chinese economy to grow 6.9% in 2017 at a speech this week. This forecast beats the growth target of “around 6.5%”, which was set in March 2017. If that is a case, it could be good news to the Chinese Yuan. More importantly, the GDP report next week could impact expectations on the growth target in 2018. Chinese policymakers have announced to move their focus to the quality of growth, after targeted at speed for decades. Any clues on how they will set the new economic target in 2018, the first year after the shift, are worth to keep an eye on.

In addition to the headline growth indicator, fix investment gauges will be released on Thursday. The expansion in total fixed assets have been on a downward trend since March 2017 and is expected to drop for the fifth consecutive month to 7.1% in December. Growth of private investment in fixed assets has been slowing as well: it dropped to 5.7% in November and is expected to continue to contract in December. Before these leading indicators signal upside potential, it is too soon to say the economy is recovering steadily.

Despite that the Chinese Yuan set a 4-month high this week, it may have lost support from the Chinese regulator to extend advance. The PBOC hinted a suspension in proactively adjusting the Yuan reference rate, a measure it implemented for 7 months. At the same time, the Yuan is unlikely to take on bullish momentum driven by tightened policy. The Vice Chair of PBOC’s research bureau, Ji Min, denied media’s interpretation from his speech that there is room for interest rate hike in the near-term. Within such context, the Yuan may shoot new highs temporally, driven by short-term sentiment, but it is less likely to hold high levels without regulators’ confirmation.