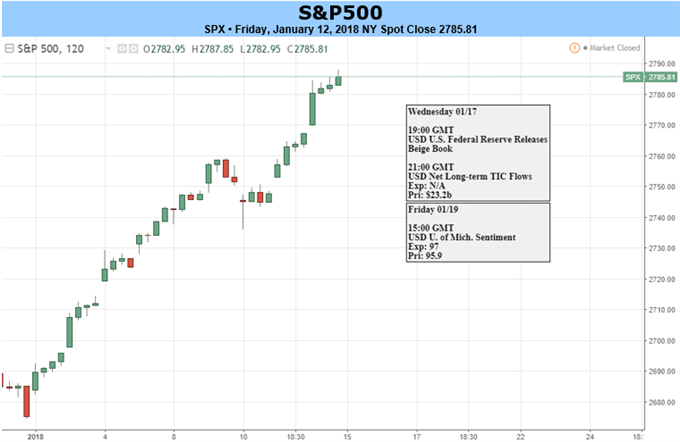 Looking ahead to next week on the fundamental-front the docket is absent of any ‘high’ impact data events until Friday when UofM Sentiment is due out. For a list of all data releases, see the economic calendar. To start the week, the market is will be closed on Monday in observance of Martin Luther King Jr. Day. General risk trends and earnings season will likely dominate sentiment.

The S&P 500 concluded the second week of the year on a strong note, pushing the market further into record territory. It’s a difficult spot for those on the sideline right now, as fresh long entries are at risk of a pullback, but initiating shorts holds even less appeal. Until we see how the market reacts to the recent run-up, risk/reward in either direction isn’t favorable. The top of the recently breached channel is viewed as the first source of support. 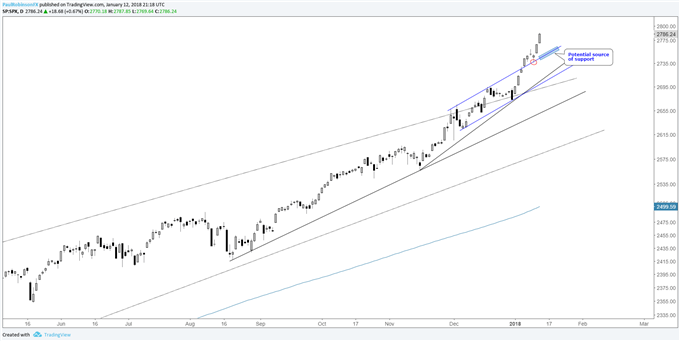 Looking ahead to next week, just as is the case in most parts of the globe, key economic data will be lacking. Last week, there was a breakthrough on the development of a German coalition, but strength from the euro was a negative weighing on equities. The euro will continue to be a focus as it probes three-year highs and puts pressure on European stock markets.

The DAX was mostly negative throughout the week after breaking above December’s high on Monday. The pullback was fairly aggressive, but nothing which is viewed at this time as derailing the German index. Strong visible support is lacking at the moment. For starters focus will be on the Thursday low at 13151. Resistance may come in at a developing trend-line off the November high, but the more important level is last week’s high at 13425.

Struggling with confidence right now? You’re not alone. See this guide for ideas on how to Build Confidence in Trading. 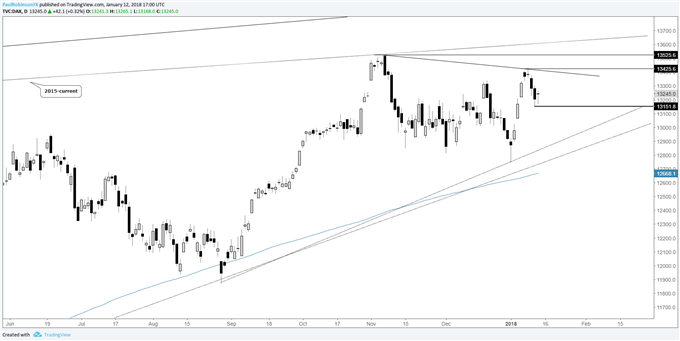 Looking ahead to next week, the only ‘high’ impact data event on the calendar is CPI on Tuesday. ‘Brexit’ news is always a potential source of volatility, but generally risk trends are favorable. For the full release of data, check out the economic calendar.

The FTSE continued its impressive surge last week and is closing in on the projected target zone of 7850/900 based on the size of the range which dominated the second-half of 2017. Similar to the S&P 500, we have reached a point where both sides of the tape don’t hold great appeal, as the market becomes increasingly likely to experience a set-back, but yet still shows no true signs of letting up. Waiting for a better set-up looks to be the prudent course to take for now. 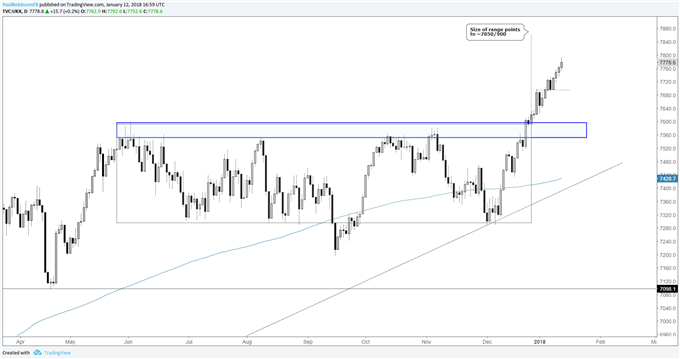