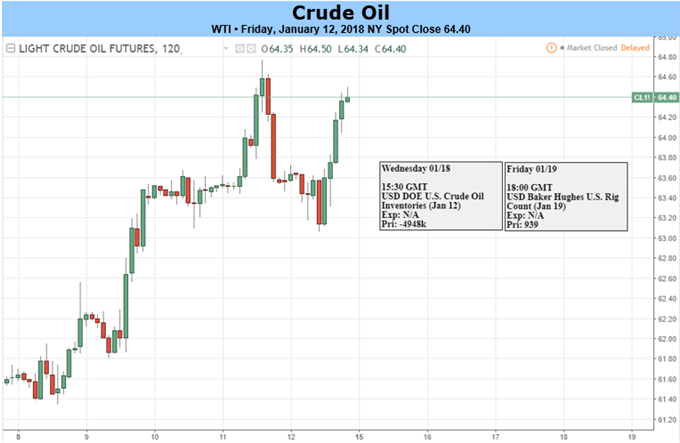 Crude remain bid as the Organization of the Petroleum Exporting Countries (OPEC) and its allies extend the production cuts from 2017, and oil prices may continue to exhibit a bullish behavior as the group stays on course to reduce supply.

Oman Minister of Oil & Gas Mohammed Al Rumhy sees oil prices holding around $65-70/bbl for the next few weeks as the region reduces output by 45K b/d, while Russian Energy Minister Alexander Novak warns that ‘the market hasn’t rebalanced in full’ as Lukoil CEOVagit Alekperov favors crude stabilizing around $70/bbl. The ongoing push to cut production should keep oil prices afloat over the near-term especially as U.S. output falls back from fresh record-highs.

Unlike, OPEC and its allies, the U.S. Energy Information Administration (EIA) forecasts oil prices to average $55/bbl in 2018as ‘crude oil production from the United States is expected to increase more than in any other country.’ However, narrowing U.S. inventories paired with the recent slowdown in field production may keep oil prices afloat especially as the bullish momentum appears to be gathering pace. 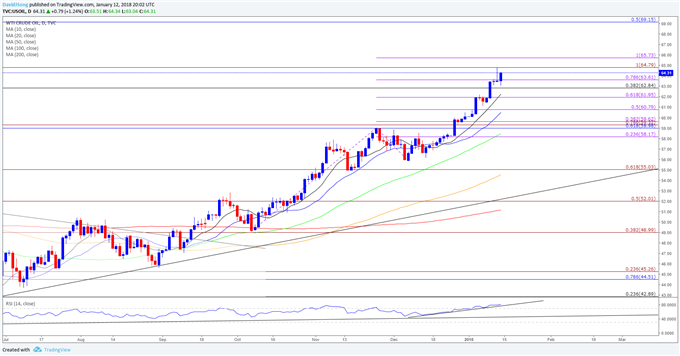 Near-term outlook for USOIL remains constructive as crude prices clear the May 2015-high ($62.56), while the Relative Strength Index (RSI) extends the bullish formation from the previous month and pushes deeper into overbought territory. A break/close above $64.80 (100% expansion) opens up the next region of interest around $65.70 (100% expansion), with the next key hurdle coming in around $69.20 (50% retracement). Interested in trading? Review the ‘Traits of a Successful Trader’ series on how to effectively use leverage along with other best practices that any trader can follow.