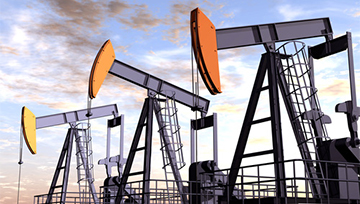 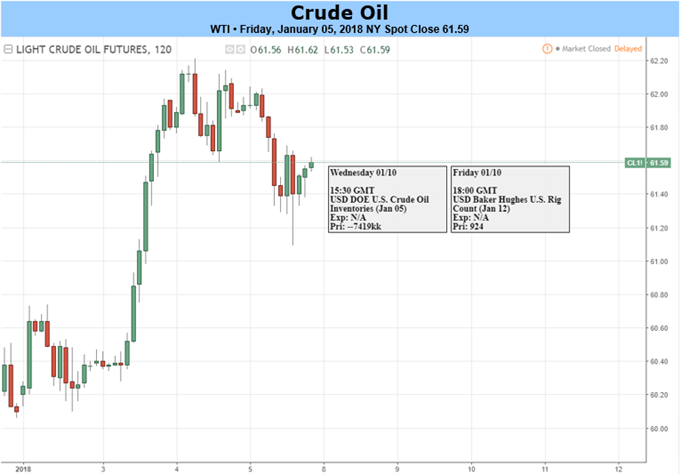 Crude Oil price began 2018 by ticking through multiple levels of resistance to the highest closing price this week that markets witnessed in three years. A major driver of the move higher was a combination of strong economic data around the world with manufacturing activity on a global scale hitting the highest level in since 2011 and the physical oil market tightening.

The tightening market was witnessed by the December 2018 Crude futures contract trading to a $3.52/bbl premium to the December 2018 contract. Such a front-month premium is known as backwardation, which shows a premium on crude available sooner rather than later in anticipation of higher demand. The spread favoring the front month was the highest on record, and hedge funds took note.

Bullish positions from hedge funds as tracked on the ICE Brent Crude Oil contracts rose to a record level. The bets rose by 4,175 net-long positions to an aggregate of 565,459. The data for the contracts go back to 2011, and the record positions supports the view that without a negative shock, the momentum favors price being supported on a probable move higher.

The price charts for Crude oil show a steadily rising trend, and the significant gains of late align with sharp moves to the top of the price channel with relatively small pullbacks.

Recently, the price of WTI Crude (US oil) reached $62, which aligned with the 200% extension off the 2017 low. A pullback from $62 should not be enough to derail the trend, and a look at the 20-day moving average can show you that it has acted as strong support since Q4 17 began. 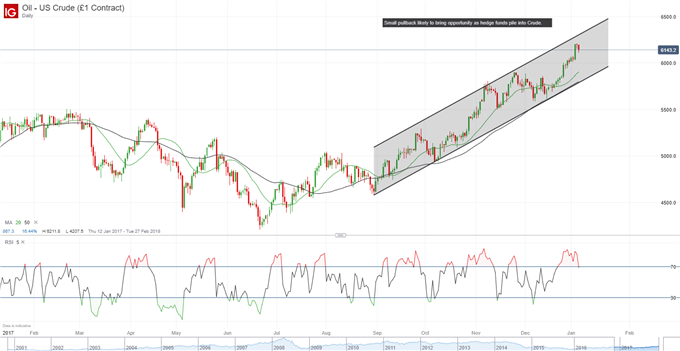 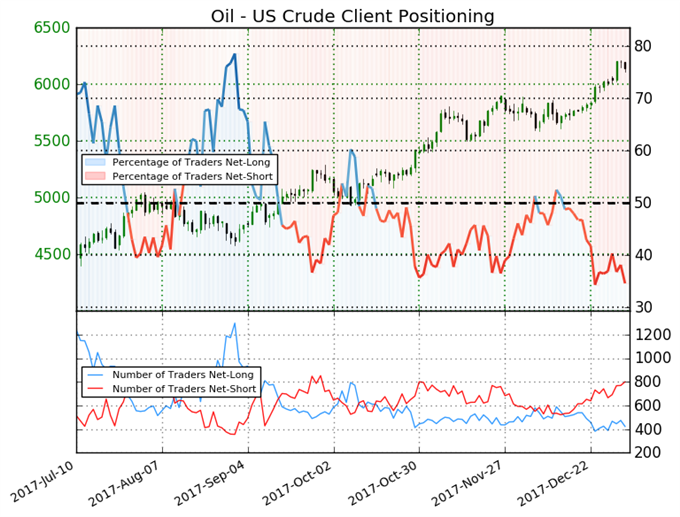 Oil - US Crude: Retail trader data shows 34.5% of traders are net-long with the ratio of traders short to long at 1.9 to 1. In fact, traders have remained net-short since Dec 19 when Oil - US Crude traded near 5737.9; price has moved 7.0% higher since then. The number of traders net-long is 9.8% lower than yesterday and 7.3% lower from last week, while the number of traders net-short is 2.7% higher than yesterday and 15.9% higher from last week.

We typically take a contrarian view to crowd sentiment, and the fact traders are net-short suggests Oil - US Crude prices may continue to rise. Traders are further net-short than yesterday and last week, and the combination of current sentiment and recent changes gives us a stronger Oil - US Crude-bullish contrarian trading bias (emphasis added).