Euro May Top the List of Major Trend Reversals in 2018

The US Dollar reversed the so-called “Trump trade” narrative prevailing in the months following the 2016 presidential election, falling against all of its major counterparts. The greenback had been buoyed by hopes that the eccentric billionaire’s unlikely triumph would bring inflationary fiscal stimulus and push the Fed into a steeper rate hike cycle. It fell as he struggled to turn campaign promises into legislation.

The Euro led the way higher as a series of worrying elections passed without handing the reins of power to destabilizing eurosceptics. The status quo held out in the Netherlands, France elected an energetic centrist in Emmanuel Macron, Italy managed the abrupt transition from the Renzi to the Gentolini government, and Spain muddled through a separatist flare-up in Catalonia.

The British Pound followed closely behind its Continental counterpart. The markets improbably cheered the outcome of a UK snap electionmeant to cement the authority of Prime Minister Theresa May over warring government factions. That plan went terribly awry, with the Conservatives losing parliamentary majority. Investors seemingly concluded this humbling experience might mean a “softer” Brexit however. 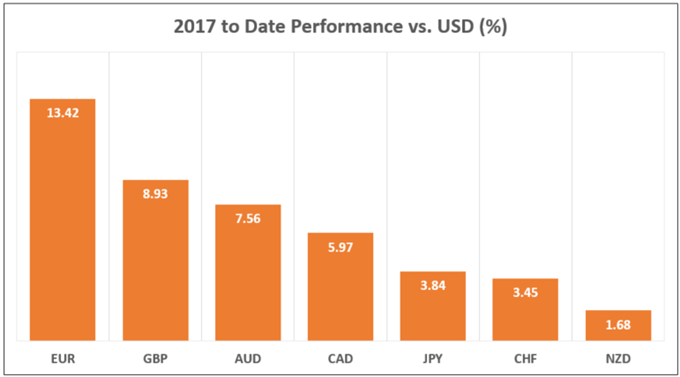 The greenback’s woes were understandably supportive for the currencies it threatens to unseat at the high end of the G10 FX yield spectrum. The Australian Dollar managed to capitalize but its New Zealand cousin lagged behind after an initially inconclusive general election produced a radically minded government promoting sweeping economic policy changes, including a change of the RBNZ mandate.

The year ahead may look decidedly different as monetary policy reasserts its influence. The Euro is perhaps most vulnerable to reversal as the passing of political pitfalls puts the spotlight back on the ECB, where QE asset purchases have been extended at least through September 2018 (albeit at a slower pace of €30 billion per month, down from €60 billion previously). An actual rate hike seems nowhere in sight.

Meanwhile, the US Dollar might stage a recovery. The Trump administration and its Republican allies in Congress managed a last-minute victory before the end of the year, delivering long-promised tax cut legislation. If this momentum extends to a plan for $1 trillion in infrastructure spending, the Fed may yet deliver steeper tightening than the two hikes penciled in by investors.

The greenback’s Canadian counterpart could be the standout after a mediocre 2017 however. The US’ northern neighbor could too benefit from any fiscally-driven growth spurt to the south without having to worry too much about political jitters linked to mid-term elections facing the entire US House of Representatives and a third of the Senate in the second half of 2018. Priced-in policy bets echo as much, in fact.

The New Zealand Dollar may also accelerate higher as worries about the policies of Prime Minister Jacinda Ardern dissipate. Perhaps most critically, her nomination of Adrian Orr to lead the RBNZ is a relief. Mr Orr is a seasoned veteran, having served as the central bank’s deputy governor and held top posts at the Treasury, the OECD and Westpac Bank before leading the New Zealand Superannuation Fund (NZSF).