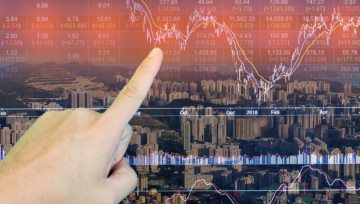 The Euro is running out of reasons to rise, inflation might push the BoE to hike which can boost the British Pound, and a supply glut might send crude oil lower. What else in 2018?

These are just a sample of our top trading opportunities for 2018. Do you want to learn about more of them? View our complete guide here.

Short: EUR vs. USD, GBP – The Euro is Running Out of Reasons to Rise

The Euro enjoyed an undeniably stellar year in 2017. That seemed improbable on January 1 amid fears of Eurosceptic triumph in key elections. Investors still shell-shocked after the Brexit referendum and the US presidential election braced for the worst. Their fears did not materialize. The status quo held in the Netherlands, France elected an energetic centrist in Emmanuel Macron, Italy managed the abrupt transition from the Renzi to the Gentolini government, and Spain muddled through a separatist flare-up in Catalonia. A pickup in economic growth sealed the deal, handing the single currency double-digit gains on the year.

Having bypassed these political pitfalls however, the Euro may be out of reasons to continue building higher. The ECB isn’t likely to be very helpful just as the spotlight returns to monetary policy. It has already set the near-term fate of QE asset purchases and probably won’t be quick to alter it. Significant tightening seems unlikely as the 2017’s Euro gains filter into on-year CPI data, slowing progress to the inflation target. Meanwhile, a nasty outturn in Brexit negotiations remains a potent threat to financial stability on both sides of the English Channel. Tactically, short EURUSD and EURGBP positions seem best to express Euro-negative policy divergence and relative underpricing of Brexit risk premium.

Long: GBP/NZD As Hurdles to Inflation Diverge for BoE and RBNZ

Last year for our top trades, I looked into a long EUR/AUD setup under the presumption that we’d see the ECB begin to shift towards tighter policy while the RBA tried to avoid the topic of rate hikes altogether. We didn’t quite see that shift in the ECB in the way that I was expecting, but that mattered little as bulls continued to pile on to the long Euro trade as data, growth and inflation continued to print with some semblance of stability in the bloc. For next year, I want to look at the long side of the British Pound: As inflation remains above 3% in the U.K., the Bank of England may need to look at tighter policy options before too long. We did get a rate hike in November – but this was done in such a dovish manner that the Pound folded over immediately after, where it remained at support for a couple of weeks before bulls came back into the fray.

I think there is a strong chance that the British Pound rips-higher at some point 2018 as persistent inflation refuses to tame after that single 25 basis point hike out of the BoE. The Bank of England has been clear in their dovishness, and if we do see a hawkish flip, this could amount to a very strong currency as markets begin to price out the prior theme of Brexit weakness as driven by an extremely cautious, dovish and loose Central Bank. I want to pair the Pound up with the New Zealand Dollar. New Zealand has a new Prime Minister as of early-August, and the currency’s performance since then has been lackluster, to put it lightly. The RBNZ is unlikely to be looking at interest rate hikes anytime soon, and if the BoE does get pushed towards tighter policy options as inflation remains well-elevated above the BoE’s 2% target, a deviation in GBP/NZD could allow for additional up-side as we move into next year. Stops can be placed below the group of swing lows that showed up in latter-September/early-October, around 1.8325. This would allow for an initial target at 2.0100, at which point the stop can be adjusted to break-even. After 2.0100, the prices of 2.0375 and 2.0672 become interesting. And if we’re able to take out 2.0672, which is the 76.4% Fibonacci retracement of the 2016 major move around Brexit, the door is opened for our final target at 2.1000. 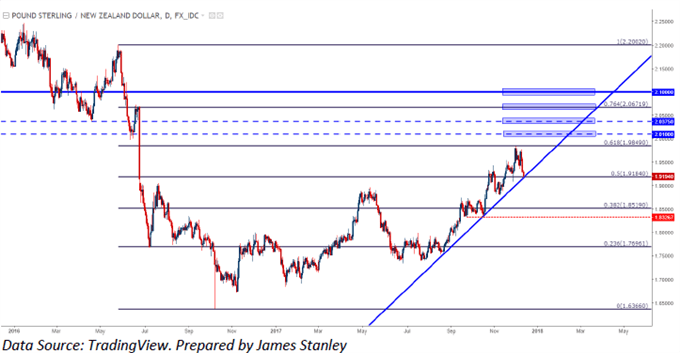 Check out our Q4 GBP Forecast to learn how Brexit may impact the British pound.

Short: Crude Oil – A Run Not Sustainable by Supply-Demand

Not so long ago, the OPEC cartel of oil-exporting nations controlled the price of crude oil but now, thanks to US shale output, there is a supply glut. Due largely to further turmoil in the Middle East, the crude price climbed steadily from mid-June 2017 but with the US shale companies ready to make up for any supply shortages, the trend in 2018 could well be downwards.

As 2017 drew to a close, the price of Brent crude, the global benchmark, was strengthened further by news of a lengthy outage for the Forties pipeline, and that could continue to support the Brent price in early 2018. However, the price of the US benchmark has no such support and is therefore more likely to fall. My top trade for 2018 is therefore to sell US crude as barring another major outbreak of Middle East hostilities the supply/demand equation suggests the contract is now significantly overpriced on a long-term basis.

Should you trade Brent or WTI Oil? Our Q4 Oil Forecastexplains why one looks better than the other.