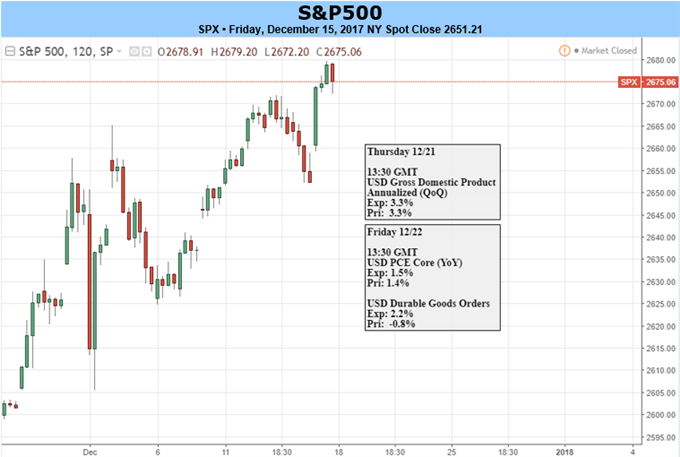 Last week, the Fed raised rates by 25-bps as anticipated, expects three rate increases in 2018. Looking ahead to next week the calendar is fairly light with Q3 GDP on Thursday and Durable Goods Orders, Core PCE on Friday. For details of all upcoming events this coming week, check out the economic calendar. Watch for a gap on Monday in reaction to the release of the tax bill.

The S&P 500 finished out last week on a strong note and looks likely to hold a bid through year-end. That doesn’t mean there won’t be setbacks along the way, but at this point with the trend as strong as it is and seasonality favorable, setbacks are likely to be quickly met by buyers. The market closed last week right around the top-side slope we’ve been discussing recently, but isn’t viewed as a reliable source of resistance for shorting. Price action isn’t warranting bearish bets beyond maybe day-trades at this time. It’s likely we see the market hold above 2625 on weakness, keeping the multi-month higher-high, higher-low sequence in place. 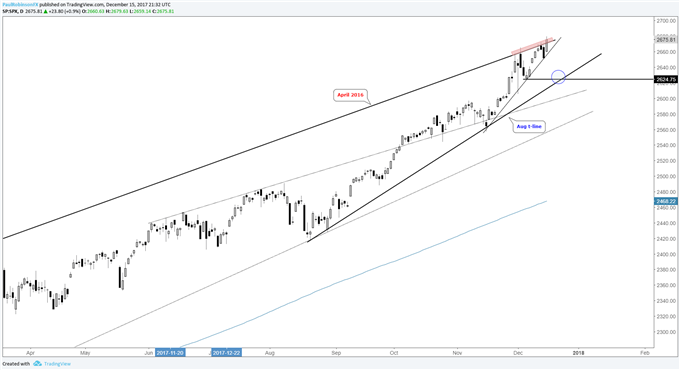 Last week, the ECB made no changes to its monetary policy and markets showed a fairly muted response to the meeting’s outcome. Looking to the calendar in the week ahead there aren’t any ‘high’ impact events, with only ‘low’ to ‘medium’ data on the docket.

Technically speaking, the DAX remains well contained within a volatile trading range. The index has made no net movement over the course of a month. This leaves us with a neutral outlook until it can break free. Risk trends favor the top-side, but the euro may have different to say if it can get into gear again and rally. If the euro declines, though, both risk trends and currency-impact will be favorable for a top-side breakout to sustain. A clean daily close into the 13200s will have attention on the record highs at 13525. It would require a break below 12810 for the market to find sellers, but a decline could be halted quickly as the June 2016 trend-line and 200-day come into view below.

Struggling with confidence right now? You’re not alone. See this guide for ideas on how to Build Confidence in Trading. 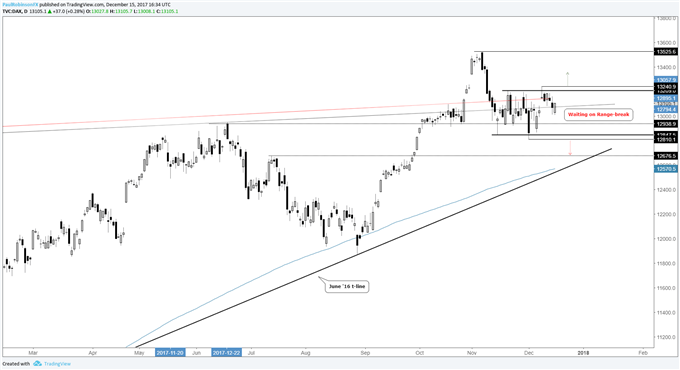 The Bank of England held on rates at 0.50% on Thursday, along with keeping its bond-buying program at its current pace. Unsurprisingly, this brought little reaction to the pound or the FTSE. The calendar for next week is light on data. The market will be watching how developments unfold with headlines regarding the second phase of ‘Brexit’ negotiations. Any big moves which may develop in GBP are likely to see the FTSE sway in the opposite direction.

The FTSE is still holding onto recent gains from the springboard bounce off of the 7300-area. There isn’t much preventing the index from testing prior record highs, but the 7550/600 area has been staunch resistance since May and will likely prove to be a challenge. Risk trends are favorable and if sterling weakens materially, like the DAX & euro, there could be a ‘double tailwind’ which gives the 100 the nudge needed to record fresh record highs. Friday’s low at 7434 is the first level of support, then followed by the 200-day just above 7400. 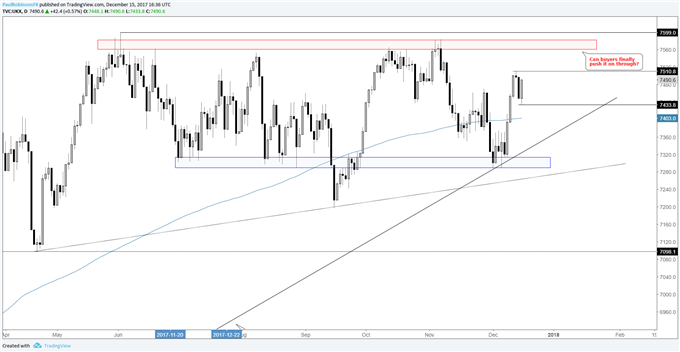