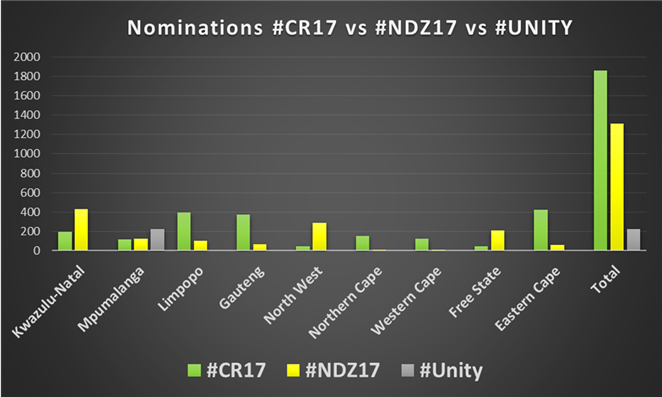 Understanding the ANC Election Impact And Why ZAR Traders Care

The ruling (by more than 50% majority) political party, the African National Congress (ANC) is set to hold its 54th conference from the 16th of December through to the 20th of December 2017. The event is held every five years with the objective of determining the party’s leadership, National Executive Committee (NEC) and constitution. The conference elective decision becomes the forerunner to the country’s leadership positions and is widely considered an event risk for financial markets.

ANC branches country wide have put forward their respective nominations for the leadership. The most important of which is the ANC presidential candidate which will be the main focus of the article.

The branches will then nominate delegates who will represent the branches at the actual ANC conference and vote for the leadership. The larger the provincial branch the more delegates are sent to the conference.

Cyril Ramaphosa (#CR17) is the current Deputy President of South Africa and considered the frontrunner in the electoral process. #CR17 was an apartheid activist and has been a successful business leader in South Africa. His political CV reads as follows:

Nkosazana Dlamini-Zuma (#NDZ17) although having lagged in the branch nomination polls maintains a very realistic chance of winning the presidential election. #NDZ17 was also an anti-apartheid activist and has been responsible for a number of South African portfolios as well as the Chairman of the African Union. Her CV reads as follows:

#CR17 led the branch nomination process with 1861 votes, #NDZ17 saw 1309 votes and Unity received 223 votes in the Mpumalanga region. The “Unity” votes seem to be a political statement alluding to unifying the party and equate to an abstained vote.

Voting at the actual conference

In addition to the branch delegates voting at the ANC conference, members of the ANC youth League (ANCYL), Woman’s League (ANCWL) and Veteran’s League (ANCVL) will make up 10% of the vote.

Assuming that the delegates vote as they did at branch level, all the “Unity” votes go to #NDZ17 as do all the ANCYL, ANWL & ANCVL votes, #NDZ17 would win the election by a small margin. 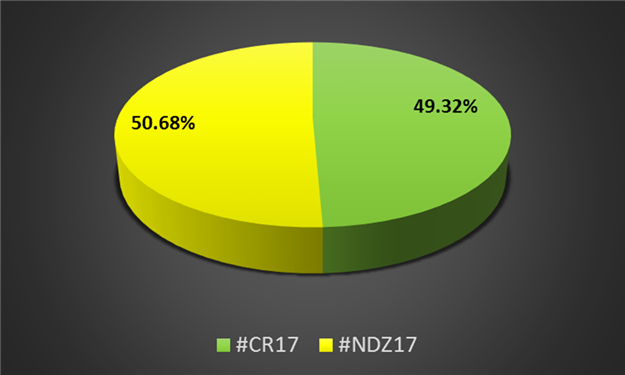 What we assume a more likely scenario, is that the delegates vote in a similar fashion to that of at branch level, the “Unity” votes are equally split, the ANCYL and ANCWL support #NDZ17 and the ANCVL support #CR17. In this scenario the result would see a more substantial win by #CR17. 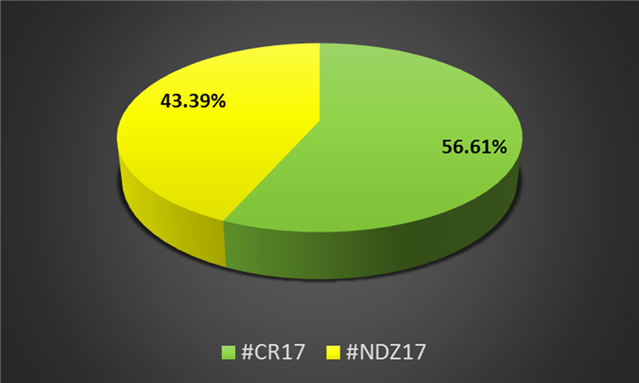 Risks to the above assumptions

While these risks are all likely to vary the outcome relative to the previously highlighted scenarios, we still believe that #CR17 is the more likely winner in the ANC presidential race.

#CR17 has been campaigning on an ending the slew of corruption within the presidency and is widely considered to be the candidate who would improve business confidence within the country. In short a win for #CR17 is expected to see firmer bond yields, rand strength and possibly short term weakness on the Jse Top 40 Index (more than 60% of earnings of shares making up the Top40 index are from outside of South Africa’s borders and would see a strengthening rand weigh). We do believe though that some of this outcome may already be priced into the market place as it is currently considered the more likely (marginally so) scenario.

The above daily chart over the last four months, shows the dollar against the rand (USD/ZAR). The red line shows the relevant downtrend currently in play. The highlighted box shows a shorter term range bound environment between levels R13.43/$ and R13.76/$ for the currency pair. A #CR17 win could see the continuation of the aforementioned downtrend with a break of the R13/43/$ level calling for R13.24/$ and R13.10/$ as successive downside targets. Traders trading this move (should it occur) on the election outcome might consider managing their risk by using a close above the R13.76/$ level as a failure of the suggested move.

#NDZ17 has perhaps seen her campaign marred in the public eye by her being endorsed by ex-husband and current (unpopular) president Jacob Zuma. This has arguably induced fears of continuity in the current leadership regime. A win for #NDZ17 is expected to be negative for business confidence and as a result we could see weaker bond yields, a weaker rand and possibly short term gains on the Jse Top 40 index (rand hedge industrial stocks on the Top 40 might find favour with the currency move).

In line with the nomination process, #NDZ17 would be the surprise victor and could invoke a more dramatic market response.

The above daily chart over the last four months, shows the dollar against the rand (USD/ZAR). The red line shows the relevant downtrend currently in play as per the #CR17 win scenario mentioned previously. Should #NDZ17 win, traders might look for the downtrend to reverse, using a break above either the R13.65/$ (trendline resistance) or R13.76/$ level to trigger a long entry. In this scenario R14.17/$ becomes the initial target favoured, while a close below the low at R13.43/$ might be considered the failure level.