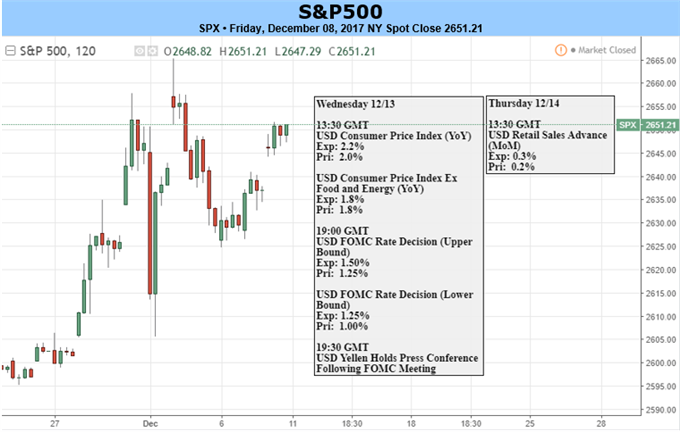 On Friday, the November jobs report was released with NFPs showing that the U.S. economy added 228k jobs during the month, topping the consensus estimate of +195k. The unemployment rate held at 4.1%. Average hourly earnings were softer at 2.5% YoY than the 2.7% expected. Next week, all eyes will be on Wednesday’s FOMC meeting, when the Fed is expected to raise rates by 25 bps to 1.5%. Barring a major surprise, the market will take the most interest in the projections and Yellen press conference at 19:30 GMT time. There will remain headline-risk out of Washington for the foreseeable future. For a schedule of data releases throughout the week, check out the economic calendar.

The S&P finished last week pushing back towards Monday’s intra-day record highs and even recorded fresh closing highs to end the week. The top-side trend-line extending over from April 2016 remains a risk, as its influence was felt on Monday’s ‘gap-n-trap’ reversal. It could be a tricky spot for the market to overcome in the days ahead. Dip-buyers continue to step in on every tiny decline, but a little more of a pullback towards the low-2600s would be a more ideal spot at this time to possibly join in on tail-end of the year strength. 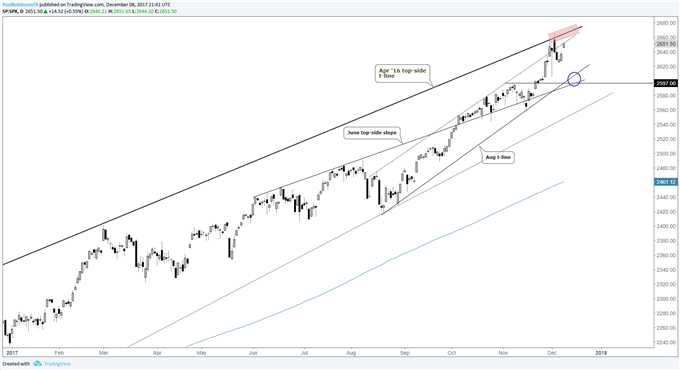 On Friday, the DAX had a knee-jerk reaction higher then lower following the U.S. jobs report. Heading into Thursday global markets will be reacting to any major moves made during U.S. hours following the FOMC meeting on Wednesday. This could cause a gap open the following day. The big event of the week for European indices will be the ECB meeting on Thursday, however, the impact could be minimal given the central bank just recently made material maneuvers. While nothing significant is expected out of the ECB, there is certainly room on Draghi’s press conference for markets to experience some volatility. In terms of data releases, the German and Euro-zone ZEW surveys are due out on Tuesday. See the full calendar here.

On Friday, the DAX attempted to break the range it’s been stuck in for several weeks. No such luck as it reversed during the afternoon. This keeps it confined for now and we still await a resolution before siding with a direction. Short-term traders may look to use the top of the range as a ceiling for shorts, but on any decline, given support not far below, it would be prudent to peel back a bearish bias until a confirmed breakdown below 12810 takes shape. If we get as strong close outside of the range there isn’t much in the way of resistance preventing the DAX from trading back towards or beyond the record high at 13525. 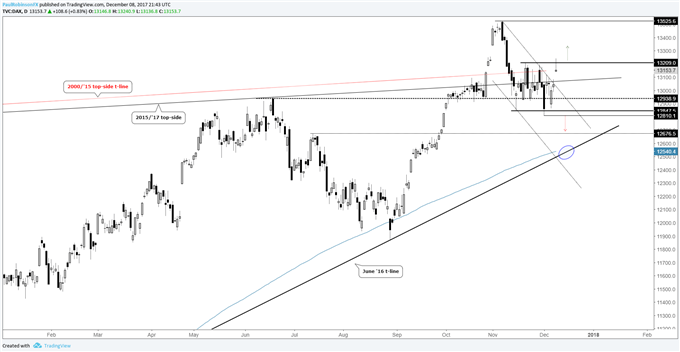 On Friday, the European Commission said ‘sufficient progress’ has been made to move on to phase two. Looking ahead to next week, in-line with other major global players, we could see a knee-jerk reaction to any outsized moves in markets following the FOMC on Wednesday. No ‘high’ impact data releases are scheduled for the week ahead, but the BoE will meet on Thursday. No changes are expected to be made by the central bank this time around. Headlines surrounding Brexit will continue to be a source of volatility.

The FTSE sprung higher on Friday, but remains within the confines of a downtrend off of record highs. It’s a minor positive that it recaptured the trend-line from December 2016, however; the trend-line off the November high coupled with the 200-day may present problematic. They both arrive right around 7400. Looking lower, the 7300/289 area offers solid support. The footsie is stuck between the lines and in need of a resolution before we can confidently draw further conclusions. 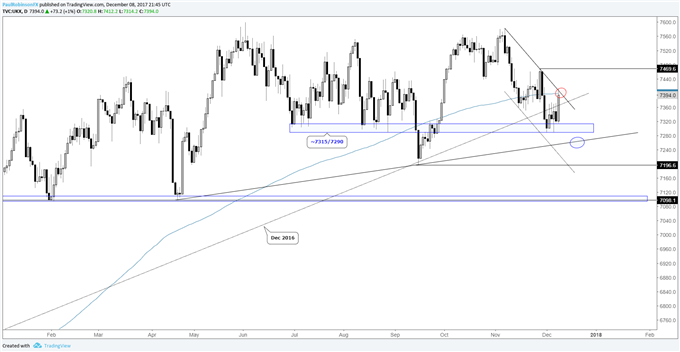 US Dollar to Rise on Fed Minutes, G20 Summit Amid Ukraine War?