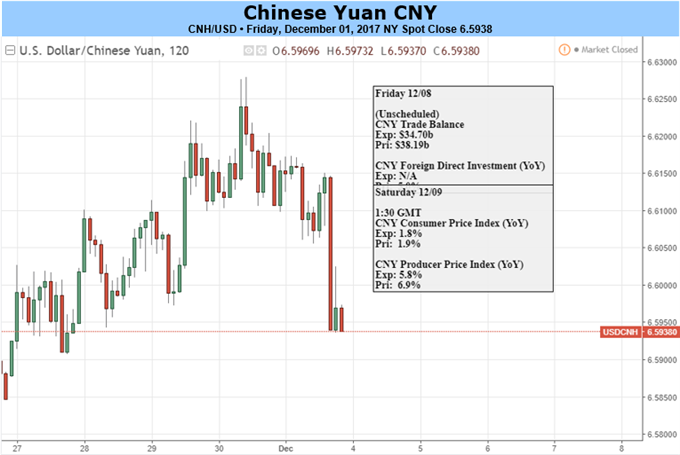 The Chinese Yuan ranked the middle against the G10 currencies this week. On Friday, the news that Flynn admitted contacting Russia has sent the Dollar plunging; this also helped the Yuan ease losses against the Dollar on a weekly basis. Looking forward, the development of the Russia probe is expected to continue to weigh on the global FX market. In addition, Chinese regulators’ recent moves in financial markets, increased tension between China and the U.S, as well as Chinese economic indicators could all bring significant impact to Yuan pairs.

SAFE and foreign reserves: China will release the November print for foreign reserves between next Wednesday and Thursday; it is expected to increase for the ninth month and maintain above US$ 3 trillion. Foreign reserves is a measure of capital flows, which has a two-way relationship with the Yuan. When the Yuan is strong, investors may increase purchases of Yuan-denominated assets and this could stimulate capital inflows; on the other hand, when foreign reserves drop, investors may raise concerns on the power of the country to maintain its exchange rate stable, and thus could lead to selling in the Yuan.

Chinese FX regulator (SAFE) has been strengthening oversight on capital flows since early this year. On Friday, the regulator disclosed 20 cases that violated FX transaction polices. This indicates that the regulator will continue to crack down illegal FX transactions over the following periods. Slowed capital outflows and increased foreign reserves do not necessary lead to an uptrend in the Yuan; yet, it will at least help the Yuan to avoid from taking on bearish momentums driven by drops in foreign reserves, such as what was seen in the last quarter of 2016.

US-China tensions and trade:China will announce the November trade prints between next Thursday and Friday. During the Trump-Xi meeting in early November, the two parties signed a series of trade deals worth US $253.5 billion in total; this largely eased trade tensions. However, the Trump administration announced to reject China’s demand of being treated as a “market economy”. The U.S. Commerce Department made its decision filed to World Trade Organization public on Thursday. This is the first time in 25 years that the U.S. Commerce Department initiated such a claim on China without any U.S. company filing a complaint.

The claim allows the U.S. to place anti-dumping duties on products imported from China. This could hurt the outlook of China’s exports over the following periods. While China is transforming from export-driven to domestic-consumption driven, trade still plays an important role to the economy. Within such context, a worse-than-expected November print could add greater downward pressure to the Yuan than usual.

PBOC, loans and monetary policy: China’s Central Bank and China Banking Regulatory Commission issued official rules to clamp down online micro-loan platforms on Friday, including Peer-to-Peer lending platforms. We discussed that curbing credit, especially home loans, is a prerequisite for the PBOC to consider to cut the benchmark rate to stimulate the economy. Launching new regulations on online micro lending is just a start; how well the regulators can progress in clamping down unwanted ones could determine the forecast of when the PBOC will change monetary policy.