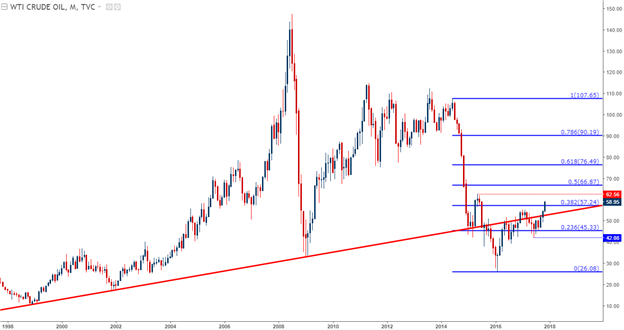 It was another strong week for Oil, as the Monday pullback to 55.75 brought bulls back in to catapult prices up to another fresh two-year-high. While the more traditional driver of OPEC combined political pressure in the Middle East has been behind much of the gains over the past five months, last week saw the introduction of another bullish driver for WTI as TransCanada’s 590,000 barrel-per day Keystone pipeline was shutdown after a spill was discovered in South Dakota. This pipeline connects Alberta’s oil sands to refineries in the United States; with a large portion of crude going to Cushing, Okhlahoma which is the delivery point for WTI futures.

This disruption in supply sent WTI into backwardation this week, in which forward futures contracts carry a discount as supply constraints build in premium for nearer-dated contracts. As of yet, there is no date for the Keystone pipeline being restored and coming back online, so near-term supplies will likely continue to be restrained. But this simple observation of backwardation would indicate that at least some of this week’s bullish run in Oil prices was driven by supply disruptions of the Keystone pipeline, while there is another bullish factor brewing in the background that will come into clearer focus next week.

Next week brings a vitally important OPEC meeting on Thursday, and this will likely help to shape the supply of the Oil market well into 2018. Already market participants appear to be trying to position-in ahead of time, as anticipation around an extension of production cuts has likely played at least some role in this week’s bullish price action. At issue is the extension of production cuts that were initially announced last year in the effort of supporting Oil prices. Those production cuts are currently set to expire in March of 2018, and over the last couple of weeks, we’ve heard multiple reports indicating that OPEC and Russia have been designing an extension that will carry those cuts for another nine months, to the end of next year. In a report published earlier this morning, Bloomberg indicates that Russia and OPEC have already agreed on the framework of that extension ahead of the November 30th meeting.

This hastening of strength in Oil prices has helped to contribute to what’s already been a fairly significant run. WTI has moved-up by more than 39% since setting a low at 42.08 in June. Prices have broken above a number of key resistance hurdles in the process, including the 38.2% retracement of the 2014-2016 bearish run, as well as the prior 2017 group of swing highs around the psychological level of $55. If OPEC and Russia announce an extension of cuts at next week’s meeting in Vienna, prices could foreseeably continue to run; perhaps even as high as the 2015 swing high at 62.56. If that level is traded through, the 50% retracement of the 2014-2016 move becomes operable at 66.87.

The one complication to continued upside in Oil prices is just how incredibly one-sided the market has become. My colleague Paul Robinson discussed this earlier in the week when analyzing the COT report, and this showed a massive increase in long positions across futures market participants; likely driven by the expectation for an extension of production cuts. This also highlights how further gains could become increasingly challenged as an already one-sided market wrestles to pull new buyers in at elevated, higher prices.

This will likely become more of a concern after the dust clears following next week's meeting. For now, the focus appears to be squarely on Thursday in Vienna, with the expectation for Oil producers to come together in agreement on capping production well into next year.

The forecast for next week will be set to bullish.