Last week was a holiday-shortened week, with markets closed for the Thanksgiving holiday on Thursday and early on Friday. Looking ahead to next week there are several ‘high’ impact events on the docket, starting on Tuesday with Consumer Confidence, but of more interest that day is Fed Chair Nominee Powell’s testimony to the Senate Banking Committee. On Wednesday, we have GDP and then current Fed Chairwoman, Yellen, will appear before the Joint Economic Committee of Congress. Thursday brings Core PCE and Friday ISM Manufacturing data. For details, check out the economic calendar.

The market continues to be strong as the end of the year nears, and expectations are for the S&P 500 to close near or at new record highs. With that in mind, weakness will be viewed as potential buying opportunities barring its nothing out of the ordinary. One spot to look to is the confluence of the lower parallel running off the August low and the June slope, this currently arrives in the 2580s. A break below these lines would bring into play the month-low at 2557, but it seems unlikely at this time if the current trend is going to continue that this would break.

Last week, the ECB released its minutes on Thursday, but the DAX and euro showed very little reaction in the absence of any surprises in the text. Next week, there are a few ‘high’ impact releases, with the OECD Economic Outlook on Tuesday, German CPI on Wednesday, and German Unemployment data and Euro-zone CPI on Thursday. The market will take interest in any strong reactions which may arise in EUR/USD as a result of testimony by Powell and Yellen on Tuesday and Wednesday, respectively. An outsized move in the dollar impacting the euro could see Euro-zone equities move opposite direction, even if only temporary.

The DAX experienced a hard decline off record highs this month, but is trying to firm up around the prior high in June, consolidation period in October, and top-side trend-lines running over from 2000 and 2015 peaks. It’s been a relatively volatile past few sessions around these levels, but appears as though the market wants to build a base for higher prices. The ‘line-in-the-sand’ is the 11/15 reversal-day low at 12847. Top-side resistance comes in at 13209 before the market can pick up momentum. 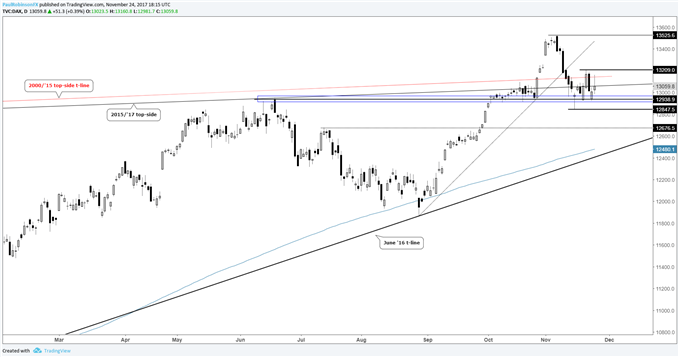 Looking ahead to next week’s calendar there aren’t any ‘high’ impact data points. As per usual, ‘Brexit’ headlines will be in focus as well as general risk trends. For all data, see the economic calendar.

The FTSE has been a laggard among global equities across multiple time-frames, as it continues to trade at the same levels it was at back in March. After another rejection earlier this month at record highs it has struggled in recent sessions to cross back above a lower-low it made from a swing-low in October. The area surrounding 7445 was resistance in August/September, became support last month, and now resistance again this month. Wednesday’s reversal bar high day high at 7461 will need to be overcome if the market is to gain traction. The longer it stays below the greater the risk becomes of another leg lower towards support in the area of 7315/290.