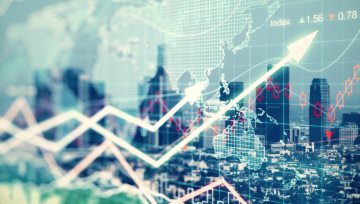 The Reserve Bank is Australia (RBA) looks poised to carry the record-low cash rate into 2018 as ‘inflation remains low, with both CPI and underlying inflation running a little below 2 per cent,’ but it seems as though the central bank will gradually change its tune over the coming months as Governor Philip Lowe notes that ‘it is more likely that the next move in interest rates will be up, rather than down.’ 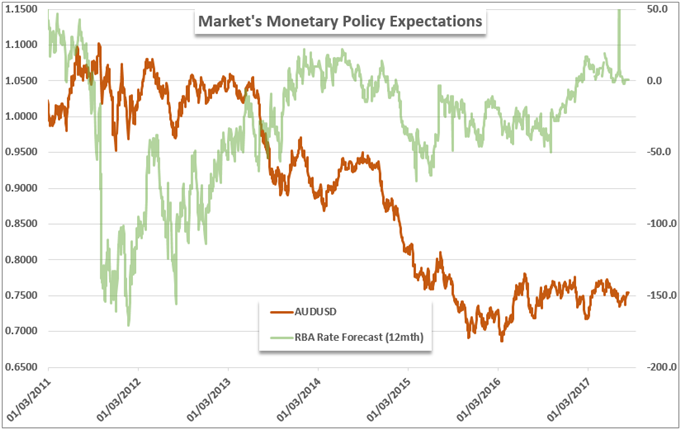 The minor uptick in Australia’s 3Q Wage Price Index (WPI) is like to keep the RBA on the sidelines as ‘growth in housing debt has been outpacing the slow growth in household income for some time,’ and it seems as though the central bank is in no rush to start normalizing monetary policy as officials are ‘prepared to be patient.’ With that said, the RBA may continue to tame expectations for an imminent rate-hike, but the recent comments from Governor Lowe suggest that the board will switch gears in 2018 as the central bank head senses ‘wage growth has stabilized at a low level and it’s not going to fall further.’

As a result, the lack of urgency to normalize monetary policy keeps the broader outlook for AUD/USD tilted to the downside, but the pair may stage a larger correction over the coming days as the RBA prepares to move away from the record-low cash rate. 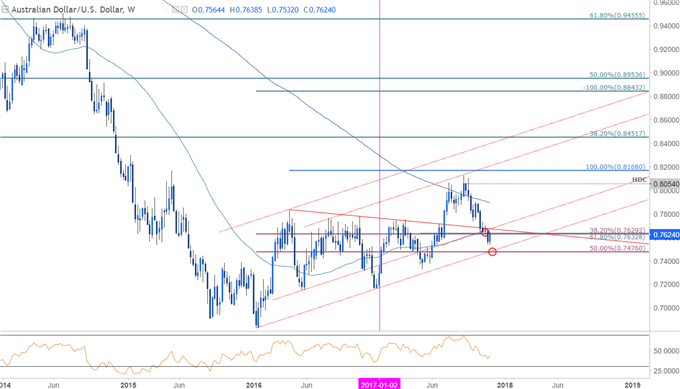 Even though the Bank of Canada (BoC) appears to be on course to keep the benchmark interest rate on hold in December, the central bank may continue to normalize monetary policy over the coming months as officials project‘inflation will rise to 2 per cent in the second half of 2018.’ 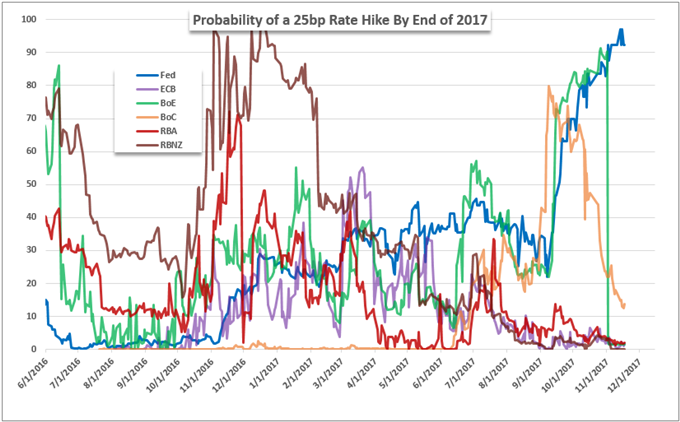 After delivering two rate hikes in 2017, the BoC appears to be in no rush to implement higher borrowing-costs as ‘wage and other data indicate that there is still slack in the labour market.’ In turn, Governor Stephen Poloz and Co. may reiterate that the ‘Governing Council will be cautious in making future adjustments to the policy rate,’ but the central bank may unveil a more detailing hiking-cycle in 2018 as ‘less monetary policy stimulus will likely be required over time.’

With that said, the BoC may sound more hawkish over the coming months, and the transition in the policy outlook may continue to foster a broader shift in USD/CAD behavior as ‘the Bank estimates that the economy is operating close to its potential.’ 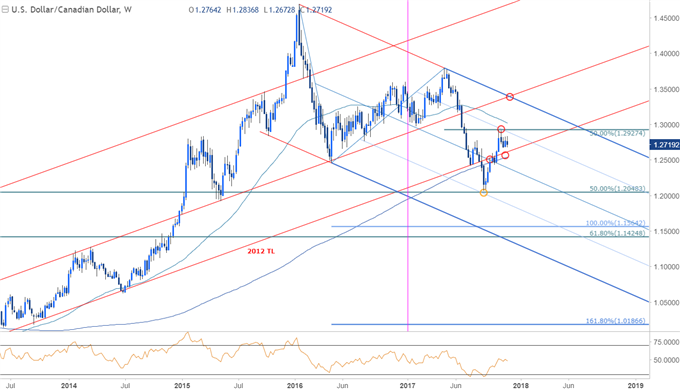 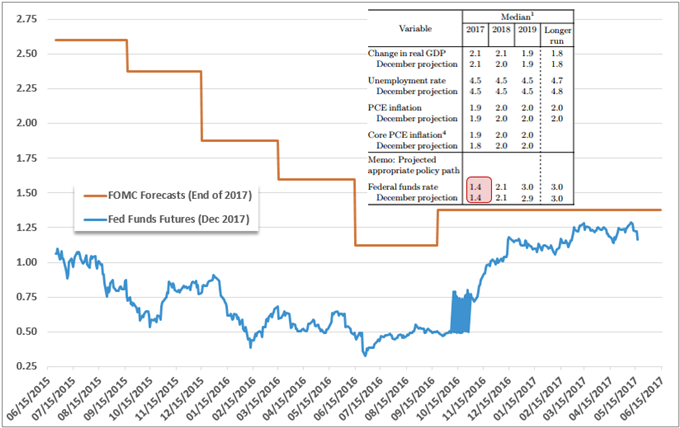 With the FOMC on course to implement a December rate-hike, market participants may largely react to the updated projections from Fed officials amid the upcoming rotation within the committee. The FOMC is likely to reiterate that ‘economic conditions will evolve in a manner that will warrant gradual increases in the federal funds rate,’ and the committee may stick to its current path of three rate-hikes per year asGovernor Jerome Powell is on his way to take the helm in 2018.

However, a growing number of central bank officials may trim the longer-run forecast for the benchmark interest rate as ‘several participants expressed concern that the persistently weak inflation data could lead to a decline in longer-term inflation expectations or may have done so already.’ In turn, the FOMC may find itself achieving the normalization cycle ahead of schedule, with the central bank adopting a less hawkish tone over the coming months as ‘a few participants cautioned that further increases in the target range for the federal funds rate while inflation remained persistently below 2 percent could unduly depress inflation expectations or lead the public to question the Committee's commitment to its longer-run inflation objective.’

In turn, the Fed may opt for a dovish rate-hike in December, with the dollar at risk of facing near-term headwinds should the central bank highlight a more shallow path for the benchmark interest rate. 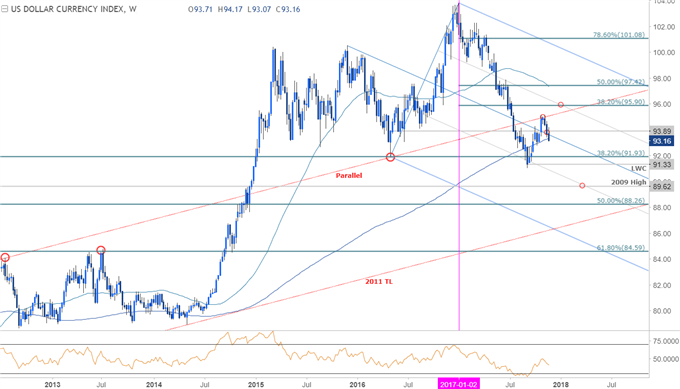 After delivering a dovish rate-hike in November, the Bank of England (BoE) may continue to prepare U.K. households and businesses for higher borrowing-costs as the central bank’s recent assessment ‘was conditioned on a market path that implied two additional 25 basis point increases in Bank Rate over the three-year forecast period.’ 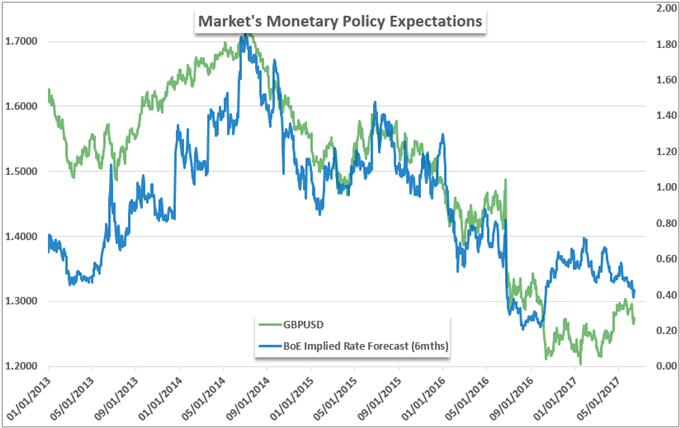 During the first stage of the normalization cycle, the Monetary Policy Committee (MPC) may follow a similar path to its U.S. counterpart as ‘a majority of MPC members had judged that, if the economy continued to follow a path broadly consistent with the prospect of a continued erosion of slack and a gradual rise in underlying inflationary pressure, some withdrawal of monetary stimulus was likely to be appropriate over the coming months in order to return inflation sustainably to target.’ Despite the 7 to 2 split to remove the record-low interest rate, Governor Mark Carney and Co. stay on course to implement one rate-hike per year as ‘spare capacity appeared to have eroded, if anything, a little more rapidly than the Committee had anticipated in its August projections.’

With that said, the British Pound may continue to benefit from the shift in monetary policy, but the U.K.’s departure from the European Union (EU) clouds the broader outlook for the exchange rate as ‘Brexit-related constraints on investment and labour supply appear to be reinforcing the marked slowdown that has been increasingly evident in recent years in the rate at which the economy can grow without generating inflationary pressures.’ 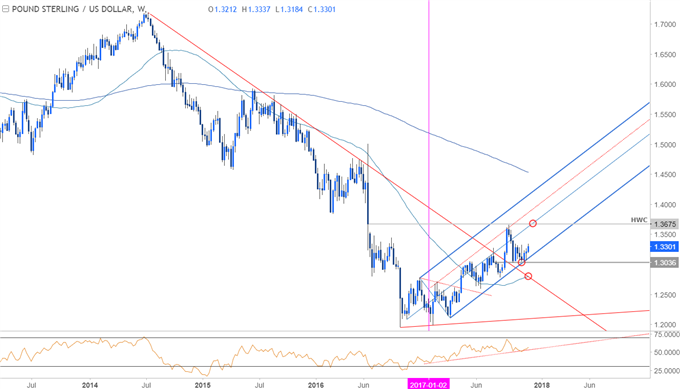 The European Central Bank’s (ECB) December meeting may generate limited interest as the ‘net asset purchases are intended to continue at a monthly pace of €30 billion until the end of September 2018, or beyond, if necessary.’ 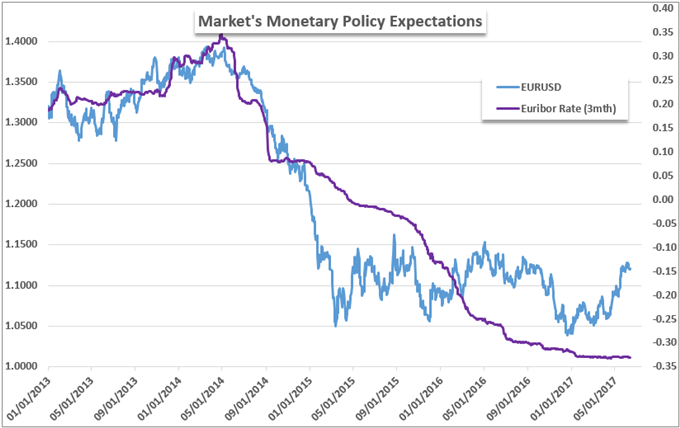 The decision to carry the quantitative-easing program into 2018 suggests President Mario Draghi and Co. will preserve the zero-interest rate policy (ZIRP) for the foreseeable futureas ‘measures of underlying inflation have ticked up moderately since early 2017, but have yet to show more convincing signs of a sustained upward trend.’ In turn, the central bank may continue to strike a dovish tone at the December meeting, with officials largely reiterating that ‘there was broad agreement among members that a very substantial degree of monetary accommodation was still needed for inflation pressures to build up and support headline inflation over the medium term.’

More of the same from the ECB may produce near-term headwinds for EUR/USD, but the narrowing threat of a euro-area breakup may fuel the broader shift in the EUR/USD behavior as the central bank starts to move away from its easing-cycle. 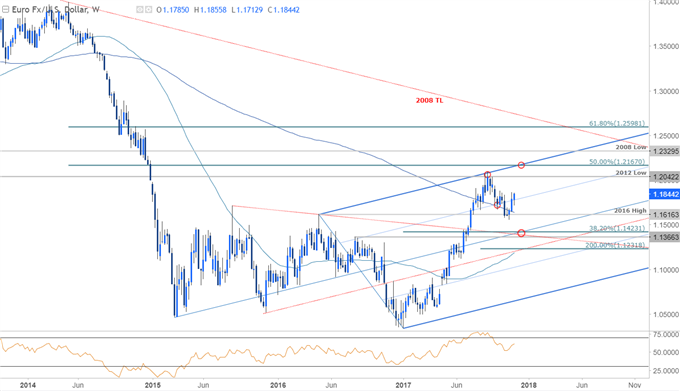 The Bank of Japan (BoJ) interest rate decision is likely to generate the least amount of attention as Governor Haruhiko Kuroda & Co. continue to embark on the Quantitative/Qualitative Easing (QQE) Program with Yield-Curve Control. 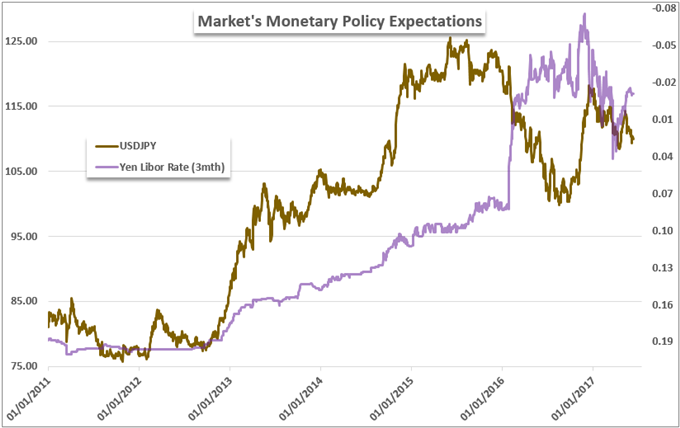 The BoJ may merely attempt to buy more time in December as the central bank pledges to endorse ‘a wait-and-see stance for the time being until the policy effects materialize under the current framework,’ and it seems as though the board will continue to expand the balance sheet as ‘the Bank will be late in heading toward an exit, given that it started its monetary easing later’ than its major counterparts.

In turn, USD/JPY may continue to track the broad range from earlier this year, with the Federal Open Market Committee (FOMC) meeting like to have a greater influence on the near-term outlook for the exchange rate. 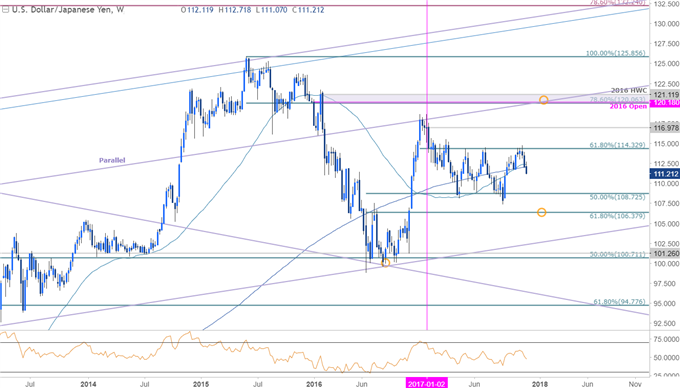 Want to build a strategy for trading key events? Start by downloading and reviewing the FREE DailyFX Trading Forecasts and Guides!