Unless you have been completely removed from the markets over the past few years, the degree of extreme inactivity measured across the financial system is a familiar sight. Whether we measure through pacing, ranges or derived implied volatility; the severe degree of inactivity is evident. A consequence of this unprecedented degree of quiet is a measure of complacency that we have not seen in the modern financial era. Further – and perahps more destructive – the remarkable constraint has translated into complacency and a wreckless pursuit of risky exposure.

We are heading into the final month of 2017, and history suggests a further seasonal deflation is ahead of us. Yet, what can a cyclical reduction in activity do against a backdrop of already-extreme quiet? Will this situation persist indefinitely or will the sheer disparity of the market prompt its own rebalancing? We take a look at some of the seasonal and structural measures of our current predicament and weigh what the next phase may mean for the markets and our trading.

It is Very Very Quiet

It is difficult to articulate just how complacent the markets are at present. We could point to the excessive use of leverage, the extreme heights of capital benchmarks like US indices or weigh in on the record low rate of collective return on the same measure of risky asset compared through history. Then again, we don’t have to be so abstract to illustrate our circumstance. The below chart of the VIX Volatility Index (S&P 500-derived, 1-month implied activity measure) denotes all the times in the measures’ 27 year history that it had closed below 10 – an extremely rare low. Prior to this year, that tally was a sparse 9 days. In 2017 alone though, we have seen 44 such instances. Are conditions simply that clear and quiet or is this a strong contrarian reading via complacency? I suspect the latter. 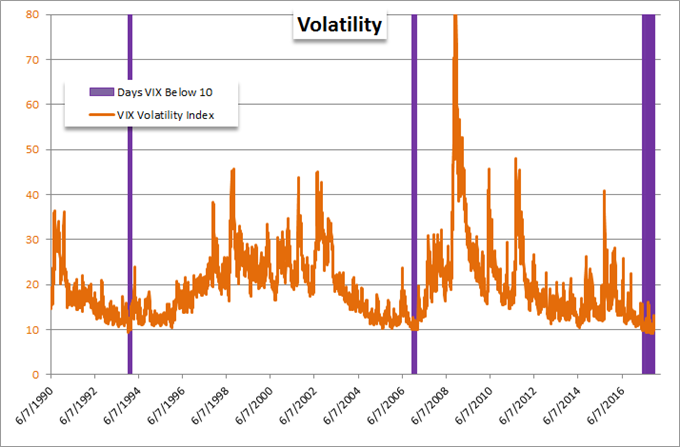 From Structural to Seasonal

Compared to any other point in history, our financial system’s activity levels are unprecedentedly quiet. Yet, perhaps there is opportunity – or at least anticipation – for it to go even lower. When we reference historical conditions, we find that December often registers a seasonal drop from the VIX – though it does not average out to the levels recorded through the summer. We are already defying convention as is, so it is not wholly impossible that the upcoming month may not represent a slide from November and October levels. It is also the case that we could witness an unprecedented December volatility surge in 2017 that finds a thinned market rapidly falling apart. 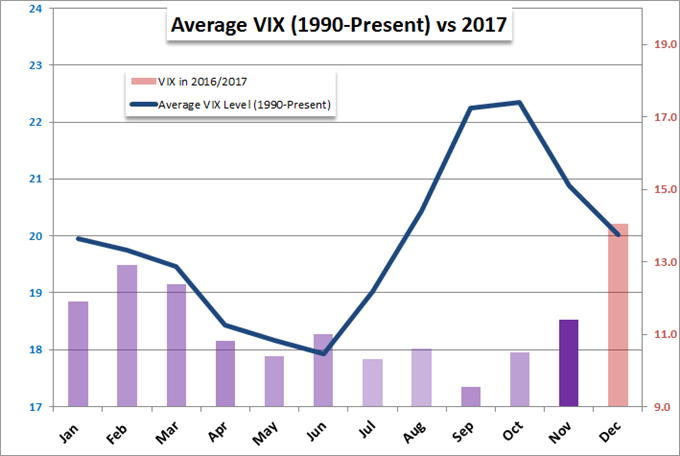 Another look at seasonal factors measured via calendar months shows the S&P 500 regularly falters in December. Volume and open interest are extremely important to measuring participation and conviction. It comes as little surprise that the holiday-laden final month sees a sharp decline in the average volume of the month (registered with the blue line below). Less controversial due to the shortened trading period is the gauge of activity defined by the index’s range divided by spot – so as to reduce the impact of historically different market levels. June is actually the low on this scale, but December’s range as a percentage of the spot close is an unfavorable second at 5.6 percent. 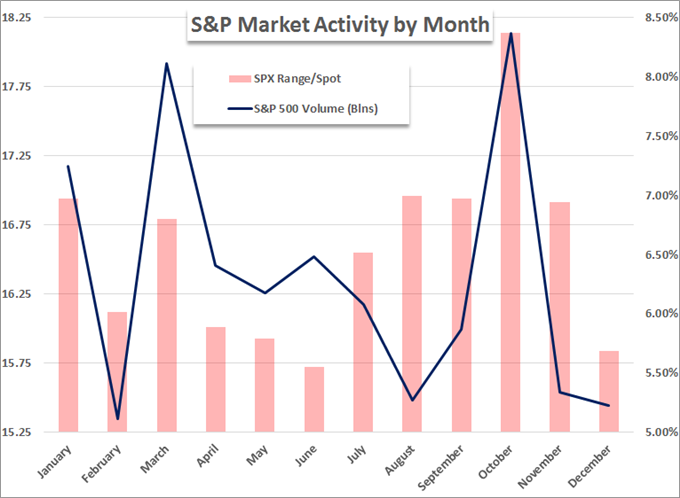 Looking to the favorite activity derivatives, we find the VIX shows very much the same reality of a quiet December. The same range as a percentage of current spot is comparatively low relative to the rest of the year. However, far more remarkable is the drop in open interest – speculative participation – in VIX futures on a monthly basis. December sees an exceptional drop in participation which either is born of tempered expectations or causes it – a ‘chicken and the egg’ scenario. 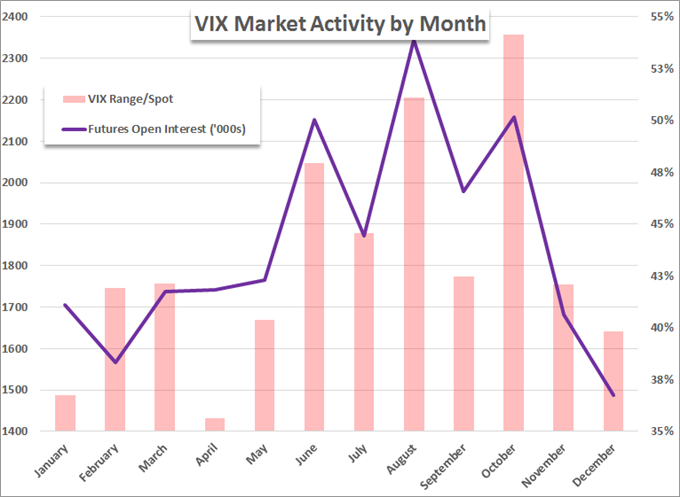 The ‘Consequences’ of Low Volatility

Low volatililty can be a boon for investors as it can encourage investors to put their capital to use and thereby lift markets and economies. Yet, there is also a clear detriment when the the situation moves to extremes. Deep complacency can usher in a false sense of security alongside poor exposure on a risk/reward basis and thereby exacerbate financial instability. I think we have long past that threshold and have sailed deep into dangerous territory. One measure I reference regularly to evaluate that risk is the speculative interest in VIX derviatives. There is an unbelievable drive towards ETFs, but it is futures that gives the more ready measure. Below we see the net speculative exposure among futures traders. It has steadily increased to a record net long over the past year despite the fact that have progressed to a natural and even record low. 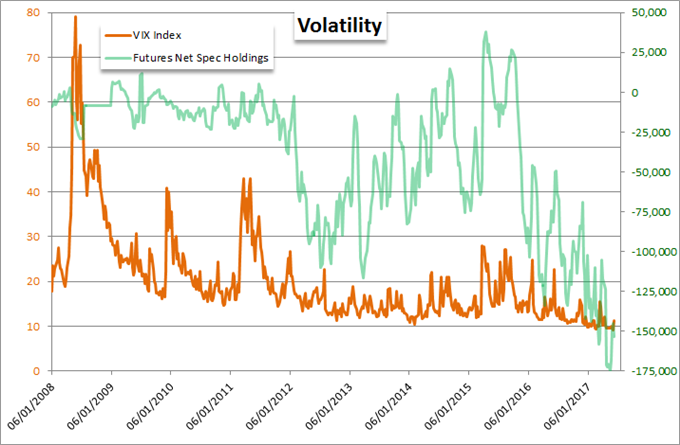 Should volatility start to finally normalize – as is inevitable – there is also a clear corrolary to draw to participation. Market turnover moves hand-in-hand with volatility. We can see that in the 20-year chart of S&P 500 volume and VIX below. So, what happens should activity levels make a permanent move higher? 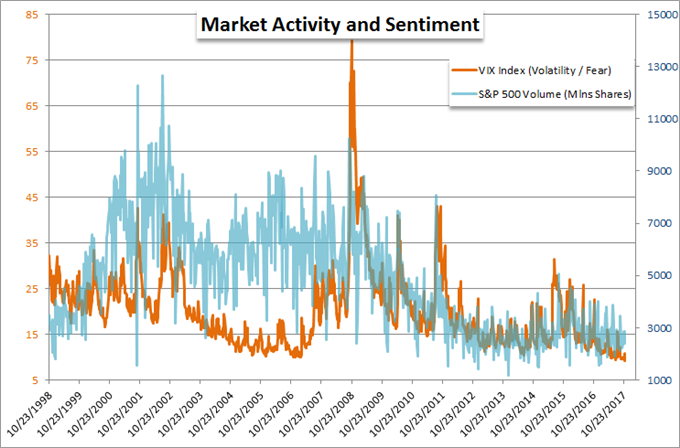 And, a final observation on the state of troubling inactivity in the markets is that this is not isolated to equities. The deflation in amplitude is a universal phenomenon which can be seen in the year-over-year relative performance of volatility measures for equities, FX, commodities, yields and emerging markets. Complacency in other words is global, and the systemic crisis that can arise from a universal rebalance of extreme positioning seems to have little hope of avoiding a severe disruption to the system. 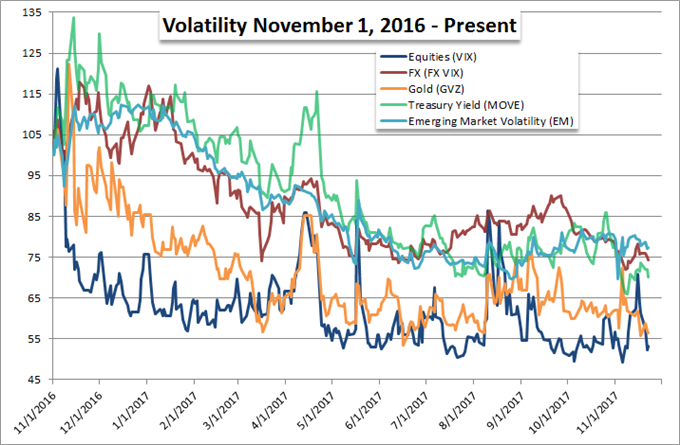