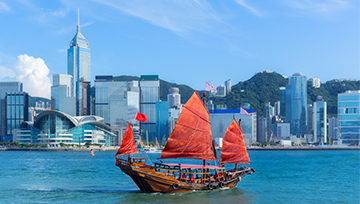 Asia Pacific Currencies Still Stymied By Their Own Central Banks

Join DailyFX analysts to trade the major economic data as they happen. We’d love to have you along.

Asia Pacific currency majors spent much of 2017 overwhelmingly driven by the “USD” side of their respective currency pairs. 2018 will probably offer more of the same, at least in its early months.

Part of this is due to the shifts in America’s political landscape engendered by Donald Trump’s 2016 ascent to the Oval Office. Financial markets gave him the benefit of considerable doubt early, resulting in the so-called "Trump trade" and broad based US Dollar gains. Then a degree of reality set in, a reality bordered by US legislative gridlock, North Korea’s rising nuclear intransigence and worries that America’s abrupt withdrawal from the Trans Pacific Partnership might be the shape of protectionist things to come.

Matters changed a little in September. Robust US economic data, the prospect of tighter monetary policy and, at last, some tax cuts, buoyed the greenback once more. Almost any foreign-exchange chart will show the year’s route in some detail, but here’s USD/JPY with a solid illustration. 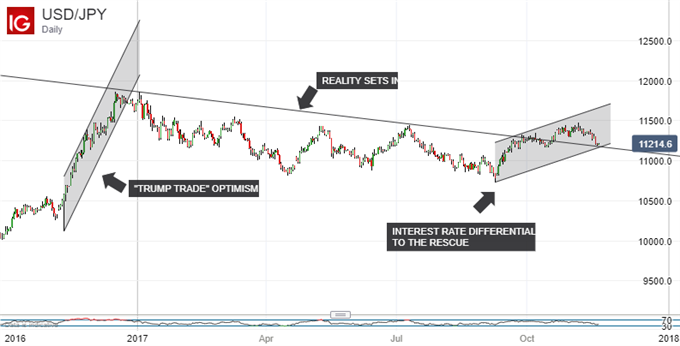 The problem for Asia Pacific currencies, or at least their bulls, lies mainly in monetary policy differentials.

The economies of Japan, Australia and New Zealand are all performing well. But this performance is not yet of the order which seems likely to cause interest rates to rise from record lows – even as they do elsewhere.

Japan’s case is perhaps the clearest.

Bank of Japan Governor Haruhiko Kuroda remains adamant that his ultra-loose monetary settings are going nowhere, and may even be loosened, until annual Consumer Price Index inflation sustainably skirts 2%. To be sure CPI is heading the way he’d like but, at just 0.7%, Japan faces months and perhaps years of miserly interest rates.

Meanwhile Australia’s consumers remain worryingly indebted to the Reserve Bank of Australia’s eyes, while wages and inflation remain too weak. The RBA is also at pains not to burnish the Australian Dollar’s attraction to investors by raising rates. Official worries about the problems a strong Aussie causes its home country are about the most frequently heard monetary lament in the world.

As for New Zealand, well, it’s new government seems quite keen on the idea of adding a ‘full-employment’ mandate to the Reserve Bank’s inflation-busting remit. If it comes, this may be quite a nebulous thing. We’re assured that no absolute unemployument rate will be targeted. All the same, a dual mandate may well suggest lower rates for longer than might otherwise have been the case.

So, here we see all three currencies to some extent rendered immune to their own economic data by central bank or government policy which will alter only very slowly or not at all. Will this backdrop change in 2018?

Well, in Japan’s case it must be unlikely. If Kuroda is reappointed and sticks to his monetary guns, then local economic data will remain all-but irrelevent to policy making with the exception of the monthly CPI release.

New Zealand and Australia are probably more likely to raise interest rates before Japan does, but markets don’t see a move from either as imminent, and record-low settings could well survivie 2018 unless their economies select an unarguably higher gear.

At least for the early part of 2018 then, those trading Asian majors are going to be mainly watching events on the other side of the Pacific.