Will the S&P 500 Keep Hanging Tough, or Join the DAX & Nikkei Lower? 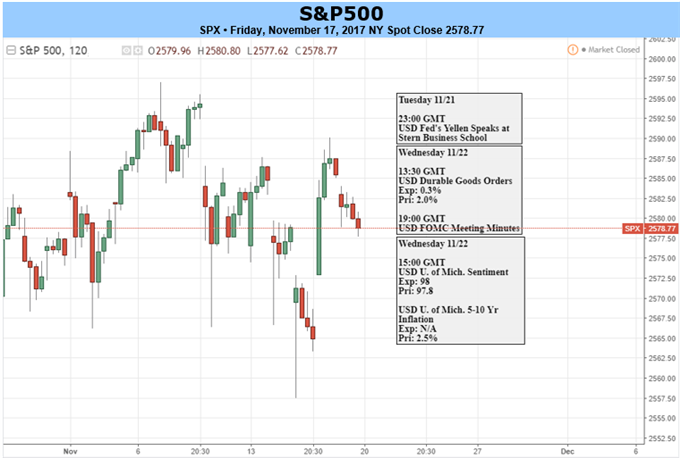 Check out the DailyFX Forecast to see how we anticipate markets to end 2017.

The calendar for next week is relatively light, with the only ‘high’ impact releases set for Wednesday when Durable Goods Orders is due out, and later in the day the FOMC minutes from the earlier-month meeting. It’s unlikely there will be anything in the minutes which stir markets too significantly, but as per usual, be prepared for the unexpected. For the full weekly line-up, see the economic calendar. U.S. markets will be closed on Thursday in observance of the Thanksgiving Holiday. Expect trade to thin out Wednesday and Friday.

The S&P and Dow are both postured tenuously, with the later having ‘head-and-shoulders’ potential (most easily viewable on the hourly time-frame). It will of course need to break the ‘neckline’ of the pattern around 23240 for validation. But should it do so, then we are likely to see some selling in U.S. equities, in-line with what we have seen going on elsewhere in the world. The S&P is still hanging on outside of a rising wedge formation, but needs to turn down soon before the formation becomes invalidated. The longer the market hangs out, the more probable the recent choppy price action is a consolidation setting up for another leg higher. This coming week could be pivotal. 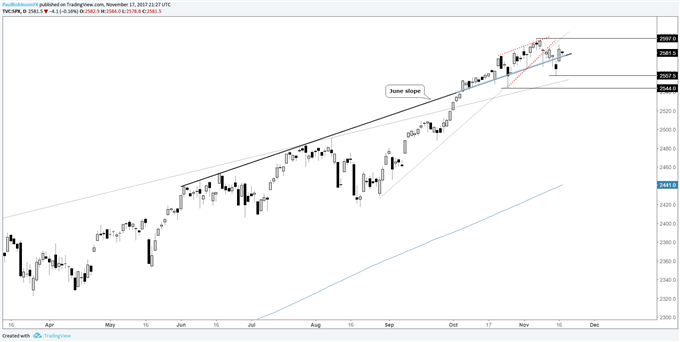 Struggling with your trading? You’re not alone. Check out this guide for ideas on How to Build Confidence.

On Thursday, we will have the minutes from the most recent ECB meeting, but outside of that there are no ‘high’ impact data events on the docket. The euro will be in focus as it tries to decide which way it wants to proceed from here. The one-month correlation between EUR/USD and the DAX is at a very significant -86%. They are effectively moving in opposite directions of one another a day-to-day basis.

After briefly breaking down below key support in the low-12900s on Wednesday morning, the DAX rallied in the afternoon to put in a small key reversal day which led to a small lift late-week. A clean clearance below 12847 will put the DAX at risk of continuing weakness we’ve seen off the monthly high. In the event of a breakdown, the next level of support clocks in at the July swing-high at 12676 and then the trend-line off the June 2016 low and 200-day MA. If the reversal-day can hold, the market will need to regain clearance back above the long-term trend-lines which kept a lid on the market last month prior to breaking out. 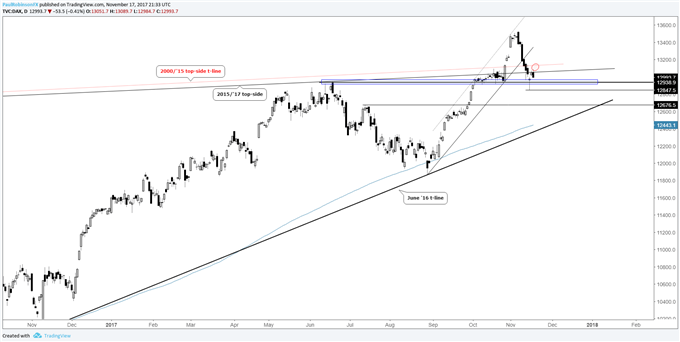 No major data on the calendar for Japan next week, risk trends and Yen strength could be the focus. It is interesting to note that during the rally off the September low until the recent peak, USD/JPY failed to gain a bid, but is now finding plenty of sellers as it works back lower to key support in the 11175-vicinity. It may be a sign that recent weakness in Japanese stocks may continue.

The ‘long-legged doji’ posted on 11/9 proved to be a pivotal day, as since then we’ve seen the Japanese benchmark sell-off. The bounce late-week fizzled on Friday and may mark a lower-high in what could develop into another leg down. We’re indeed trading around some long-term levels here as the Friday high came right at the 1996 high breached momentarily the week before. A breakdown below last week’s low at 21972 leaves room for a decline, with no highly visible support until the top seen in 2015 just under 21k. It doesn’t necessarily mean the Nikkei will drop precipitously to that point, but there is ‘open space’ for it to trade lower.