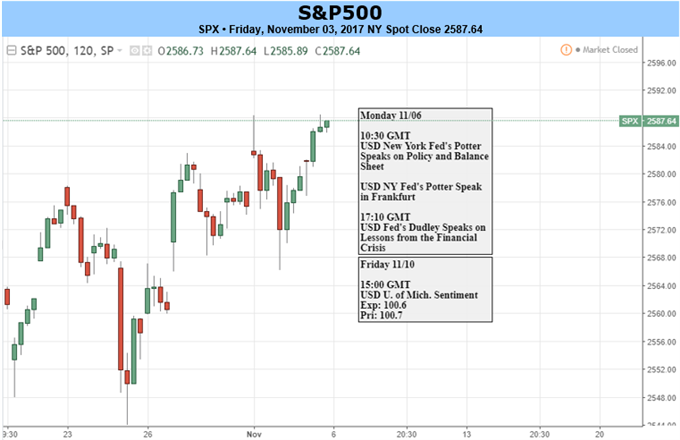 Where are markets expected to end 2017? Check out the DailyFX Q4 Forecasts for our insights.

Last week was a busy one on the fundamental-front, but had little net-impact on stocks, or other markets for that matter. Next week, the calendar is much lighter, but market participants will be paying attention to the tax reform situation out of Washington. Like many other things going on there, the tax debate isn’t without its twists and turns. The only ‘high’ impact data event on the docket is UofM Confidence on Friday. Don’t look for it to be a scorching event, though. For all data release times and estimates, check out the economic calendar.

Stocks only seem to know one direction these days, and that’s up. And while the prospect of higher equity prices by year-end seems good, there could still be spats of volatility along the way. On Friday, we made note of a short-term pattern developing which may bring a bout of volatility with it. If the two-week rising wedge is to result in weakness it will have to do so this coming week given the proximity of price to the apex of the pattern. For more on the specifics, check out this piece. The June trend-line (slope) has acted as support on both an intra-day and closing basis. This will need to be broken if the market is to gain downside momentum. As long as it holds then the grind higher will continue. In the event of a wedge-break, at this time weakness looks likely to be short-lived and could provide traders with a ‘buy-the-dip’ opportunity at some point. 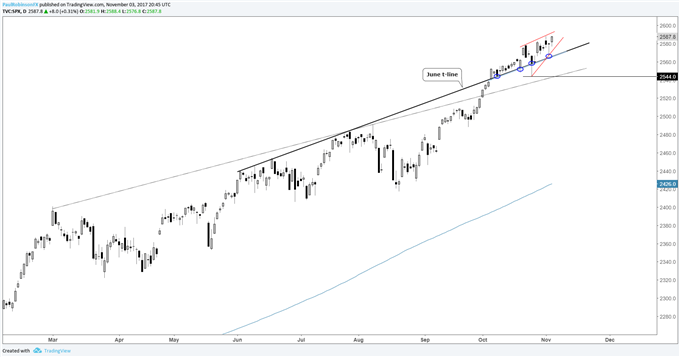 Struggling with confidence? You’re not alone. Check out this guide for ideas on How to Build Confidence in Trading.

The calendar is slim next week with key data-points, and so euro weakness and general risk-trends will be in focus. EURUSD is trying to make a run lower from the ‘head-and-shoulders’ top after spending last week in retest mode of the broken neckline. The one-month correlation between the euro and DAX is at a statistically significant -83%. No denying the single-currency’s influence here with regard to European equities.

The DAX finished last week on a high note in record territory. It will start the week up very near the upper parallel tied to the trend-line off the August 29 low, but it’s not viewed as significant resistance given it runs in the direction of the trend. A period of consolidation/pullback would do the index some good to alleviate short-term overbought conditions. Without seeing material weakness it’s not likely we see the 8/29 trend-line, but if we do it will be viewed as a spot of interest for those looking to join the trend higher.

Last week, the BoE raised rates to 0.50% from 0.25% as expected, but said it doesn’t anticipate making another move until at least the second half of next year. This sparked a sizable sell-off in sterling and sent the FTSE flying. The theme of an empty calendar next week carries over to the UK as well, with no ‘high’ impact data releases on the docket.

On Friday, the FTSE broke above the 7550/65 threshold which has kept a lid on the market, but it failed to maintain into the close. It recorded a new record close, nevertheless. That remains a very sticky area for the index, and will need to be crossed with authority if it is to trade freely into record territory. It will have the June intra-day record high to contend with at 7599, but it’s not viewed as a major level. On the down-side the trend-line extending higher from September will be the first line of support to keep an eye on.