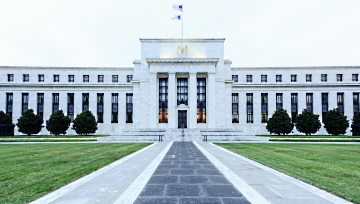 Here's How the Next Fed Chair Will Impact Policy, FX Markets

- Reports indicate that US President Trump will make his pick for the next Fed Chair on Thursday, November 2.

- Betting markets and the ‘smart money’ is on Fed Governor Jerome Powell, an Obama-era appointee who mirrors the current Fed Chair’s policy views.

- Kevin Warsh, who has a personal connection to the American president, is seen as a dark horse candidate.

The next Fed Chair will set the tone for the Federal Reserve Bank for the coming years. We will discuss the possible implications of each of US President Trump’s suspected picks, as he is expected to make his selection in the afternoon on Thursday, November 2.

- Yellen took office as Chair of the Board of Governors in 2014 was nominated by former President Barack Obama. - Unlike Kevin Warsh, Yellen has a formal background in economics.

- Overall, Yellen is cautious and has repeatedly stated that hiking rates is only appropriate with the presence of material economic growth.

- If Janet Yellen were to be the next Fed Chair, we can expect the Fed to continue along its current path of monetary policy.

- Powell took office as a member of the Board of Governors in 2012. Like Yellen, Powell was appointed to office under former President Obama’s nomination.

- In June, Powell stated, “I would view is as appropriate to continue to gradually raise rates.” He has voted with Yellen on nearly every occasion since she became Fed Chair in 2014.

- Overall, Powell as the next Fed Chair would closely mirror the Fed’s stance under Janet Yellen.

- Warsh is a former member of the Board of Governors who served from 2006 to 2011 and was appointed by former president George W. Bush.

- Notably, Warsh has a formal background in law, not economics. Prior to joining the Fed, he worked as a lawyer on mergers and acquisitions.

- Overall, he has taken a deregulatory stance in effort to ease the conditions of doing business for financial institutions.

- During the financial crisis, Warsh criticized former Fed Chair Ben Bernanke’s decision to implement monetary stimulus (“QE”). Hence, Warsh as Fed Chair would mean that the central bank would take a more hawkish stance in the years to come.

- Currently, Warsh is a distinguished visiting fellow at Stanford University's Hoover Institution and a former member of an advisory committee to US President Trump. 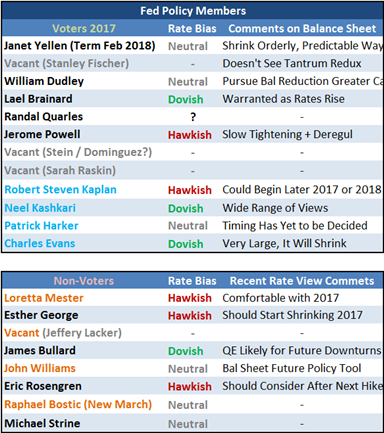 Table made by John Kicklighter

Through Wednesday evening, the Wall Street Journal reported that the President had settled on Powell for his Fed Chair appointment – though this will not be confirmed until the President announces his choice. What is noteworthy from a strategy perspective is that none of these leading contenders is more ‘dovish’ than the current bank leader. These three are either status quo with the current pace of gradual Fed tightening (Yellen and Powell) or measurably more hawkish (Warsh). That can carry clear implication for the Dollar. That said, these picks are likely accounted for in the Dollar’s current standings.

Despite the Dollar’s painful 2017 performance, rate expectations have held rather strong throughout the year. Below is a chart showing an overlay of the ICE’s DXY Dollar Index with the implied interest rate for year-end derived from the December Fed Funds futures contract. The correlation has waned somewhat over the months is large part due to the anticipated turn for major counterparts like the European Central Bank, Bank of England and Bank of Canada.

Last week, the ECB announced it would not act as quick to turn the corner on expansive stimulus as was expected by the market and the BoC has broken the chain of back-to-back rate hikes and replaced the drive with a commitment to gradualism. While the BoE decision is due Thursday morning London time (sign up for the live event here); the expected hike is finding heavy suggestion that it would be a ‘one-and-done’. Those watching the Dollar should keep tabs on the relative bearings of monetary policy as well as the Fed’s own intentions. 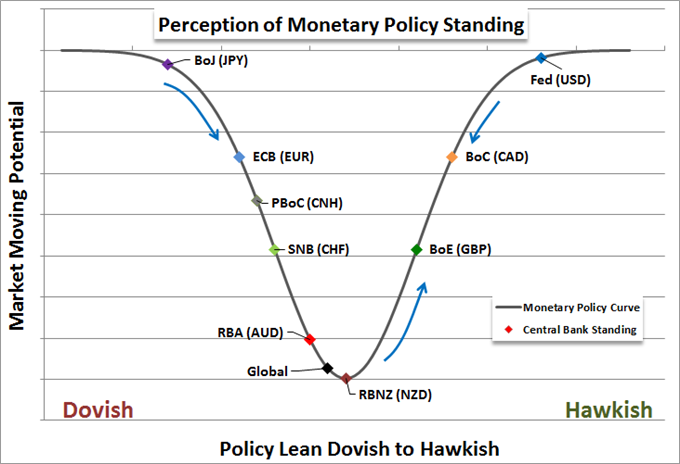