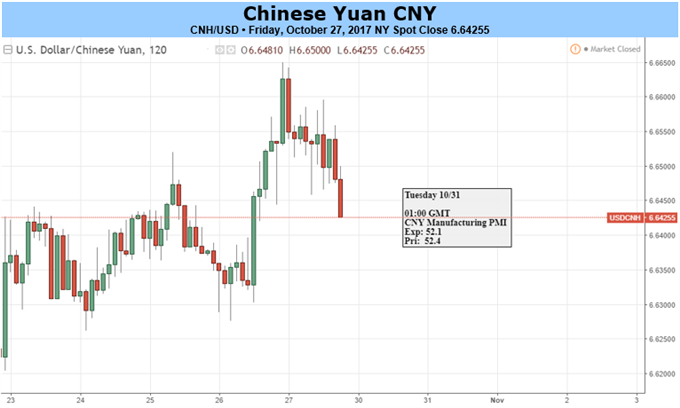 Want to know how to trade the news? See DailyFXfree trading guides

The Chinese Yuan lost against the U.S. Dollar and the Japanese Yen this week, but outperformed the rest of G10 currencies. For China, this week has great importance: not only new party leaders are announced after the 19th Party Congress, but also the blueprint for China’s development over the next 30 years have been revealed. This will help us to get a more accurate picture of the broader economy in both short-term and long run (we will discuss in details below). In terms of the coming week, key economic gauges including China’s PMI prints worth to keep an eye on. Also, more details are expected to be released about Trump’s visit to China on November 11th.

A key message sent from the 19th Party Congress is that China’s growth target has been revised: the country will no longer set high GDP growth rate as a goal; instead, it will shift to focus on the “quality” of the growth. Five years ago, the 18th Party Congress set a target to double GDP in 2020 of that in 2010. Yet, this is removed in the work report delivered by 19th Party General Secretary and China’s President, Xi Jinping. In a press conference this week, Yang Weimin, a senior official, told that this removal is intentional, as the quality of the economic expansion has not been satisfying. This means over the following period, we may see even lower growth rate – a rate below the current target of 6.5% is possible.

Also, the top Party leaders believe that China is still in the transformation phase; the recovery seen recently may not be sustainable until three tasks are finished: switching to a new development path, optimizing the economic structure and generating new growth monuments. These goals will take a “relatively long time” to achieve, according to Yang Weimin. This indicates the economy still faces considerable risks; the recovery process could take years to complete. Amid a slower recovery than its U.S. counterpart, the Chinese Yuan could bear additional bearish pressure against the Dollar in the long run.

New party leaders have disclosed major strategies for the economy over a time frame from now to the mid-century. Continuing to implement supply-side reform is the first and one of the most important on the list. This includes cutting excess production, which is a pain in the short-term but could generate gains in the long-term. Next week, China will release both the official and Caixin PMI prints for October: the official PMI is expected to drop to 52.1 from 52.4 in the month prior; the Caixin PMI is expected to hold at 51.0. With the on-going supply-side reform, PMI gauges could continue to whipsaw over the following months.

The U.S. President Trump will pay a three-day trip to Beijing from November 11thand meet Xi Jinping. Wang Yang, Chinese Vice President and a newly-elected Party leader talked with the Secretary of U.S. Department of Commerce Wilbur Rose on matters that will be discussed during Trump-Xi meetings. Trade between the two largest economies will be a major topic. Both parties may begin to reveal their stand in the coming week: more tensions on trade could hurt the Yuan more than the Dollar as we discussed when the two leaders met officially for the first time in April.