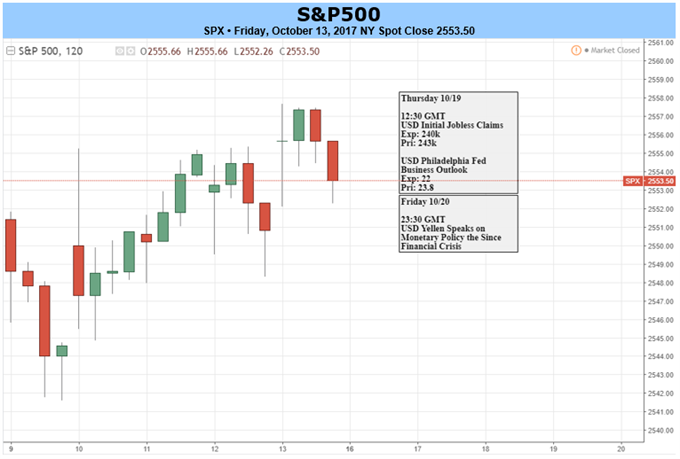 On Friday, inflation data came in weaker than expected, taking down the dollar while giving index futures a bump higher before the cash open. Looking ahead to next week, Yellen speaks twice but not during market hours. Once on Sunday and then in the evening on Friday. Nothing of major significance is likely to stem from her words. On the data-front, there are no ‘high’ impact releases. For details on all data, please see the economic calendar.

Turning to the chart of the S&P 500, the index is continuing to show impressive strength, neither top-side trend-lines running higher since March and June provided resistance, but the June line has recently acted as support. The recent digestion is likely to lead to further strength, but caution is warranted as the market becomes increasingly extended. However, until we see invasive price action signaling sellers are in quantity the market isn’t a high percentage short. For more on this, check out this piece from Friday.

The only ‘high’ impact data next week arrives on Tuesday with the release of German and Euro-zone ZEW surveys for October. Some attention will be paid to how the euro trades; just a bounce or more? The one-month correlation between the euro and the DAX stands at a statistically significant -67%, but has strengthened from a recent reading of less than -90%.

Technically speaking, the DAX is overextended and in danger of finding itself struggling to continue its march as long-term top-side trend-lines come into play. There is one which extends from the 2000 peak over the 2015 high and another which extends from a peak in 2015 over the high seen in June. On Friday, we saw the 2015/17 trend-line exert minor influence as it capped the advance with help from the euro popping on the release of poor U.S. data. There is a steep trend-line rising up from the final day of August which is in very close proximity to Friday’s close. The rejection from the top-side trend-line followed by a break of this line may bring in some weakness as it will also constitute a drop below the prior record high in June as well. But overall, it is still hard for both sides to find good risk/reward opportunities at this time. 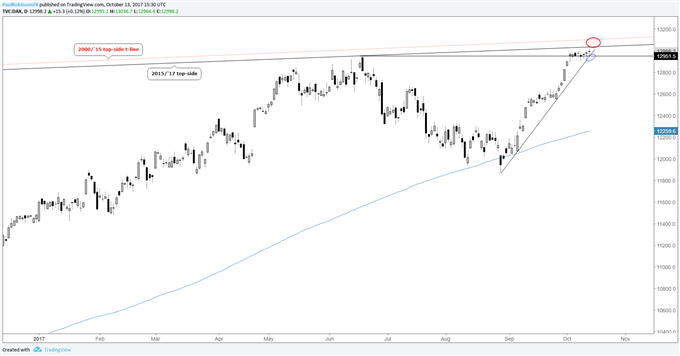 Looking ahead to next week, the calendar is lacking in ‘high’ impact data releases. The BoJ’s Kuroda is set to speak in Tokyo on Friday, but the central bank has done little to shake markets up in quite some time. Watching general risk trends and the Japanese yen are likely to be in market participants’ cross-hairs.

Last week was a big one for the Japanese benchmark. It closed at its highest levels since late 1996 on consecutive days. It’s been a powerful rally since bottoming last month at 19239. There is little interest in trying to fight momentum, but buying at this juncture without a pause at least for the index to catch its breath doesn’t look to hold the best risk/reward. A hold above the 2015 highs around 20953 and period of consolidation could lead to a decent opportunity for would-be longs. While we certainly don’t expect the market to reach towards the 1996 high at 22750 this coming week, it’s really the only substantial resistance we can find on a big-picture basis. 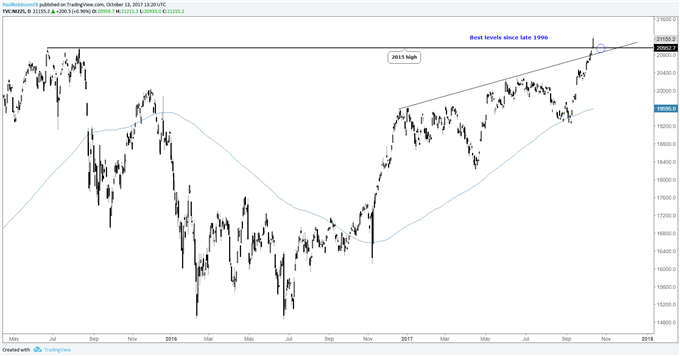