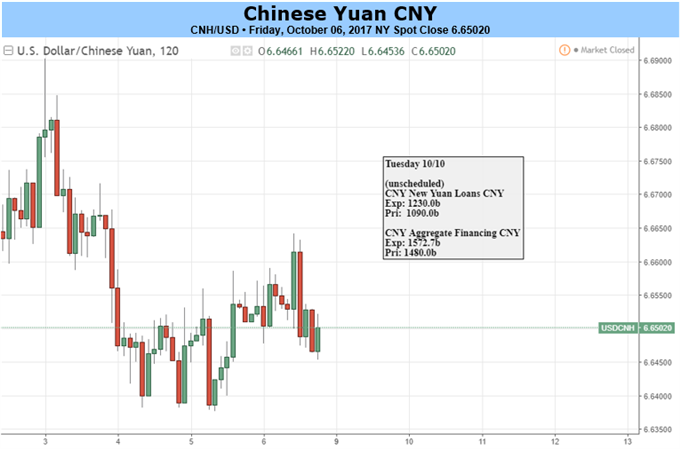 Yuan Losses Likely to Ease ahead of Top Party Congress

The offshore Yuan extended losses against the U.S. Dollar for the fourth consecutive week, amid the continued Dollar strength. As of the Friday close, the Yuan has almost erased gains accumulated since early August, when the PBOC began to proactively guide the Chinese currency stronger. Yet, the reversal seen in the USD/CNH may suspend next week when China’s onshore market reopens after a week-long holiday. As from then on, the most important theme will be China’s 19th Party Congress meeting, which will kick off in less than two weeks. In additional to this primary driver, event risks, such as September New Yuan Loans and trade gauges, could add volatility to the Yuan as well.

China’s 19thParty Congress, to take place on October 18th, will reveal the structure of top party leaders in the coming five years, as well as a broader picture of economic policies. Implementing reforms while maintaining the growth is a key task for leaders. The new authorities are likely to maintain the proactive fiscal policy and prudent monetary policy for a considerable period; while, the challenge is how to solve a series of complicated issues, such as price bubbles, high leverage and state-owned enterprises’ defaults. China’s strategy in the next five years could determine whether the economy will steadily pick up or head towards a lower low.

In the near-term, a stable Yuan is likely to be more favorable around this key meeting, from an authority’s point of view. At the same time, Yuan’s external pressure is seen reduced: the U.S. Dollar (DXY) has rose to a resistance zone; whether its strength can continue is still a question. Also, there are instances that the PBOC uses the “counter-cyclical” factor in the guidance rate formula to counter against overselling in the Yuan. (This recently-added component is an unknown part for markets). All the above-stated factors may help the Yuan to continue its medium-term bullish trend which started from May, despite of recent retracements.

In terms of intraday moves in the Yuan, economic events could be main drivers, such as New Yuan Loans. The components of total loans are more important than the aggregate figure itself. In August, medium-term and long-term home loans’ weighing dropped to 41% from 55% in the month prior; this is a desirable change in the loans structure, as the proportion of cash flowing into the real estate sector, with high risk of price bubbles, was reduced. On September 30, the PBOC announced a 0.5%-1.5%cut of reserve requirement ratio (RRR) for banks that can lend enough to small business. This measure also serves the purpose to guide the liquidity flow into desirable sectors, where companies need the investment the most and could generate new momentums for the economy.