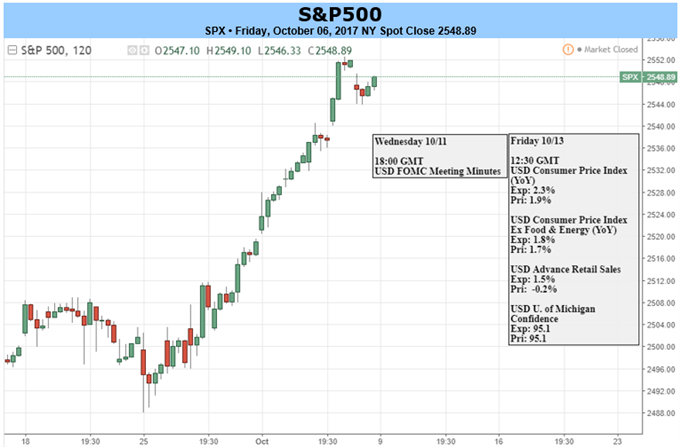 On Friday, the monthly U.S. jobs report was released, with the headline NFP number missing the forecasted estimate of +80k with a contraction of 33k jobs during September. However, the ‘big miss’ can’t be taken at full face value given it was a reflection of the impact felt from Hurricane Harvey and Maria. Looking ahead to next week, the key event will be the release of the minutes from the September FOMC meeting on Wednesday at 18:00 GMT time. Friday has a loaded docket, with CPI, Advance Retail Sales, and UofM Confidence due out. For details, please see the economic calendar.

From a technical perspective, the S&P spent most of last week rallying, with the lone exception coming on Friday where the market experienced a small loss. The rally pushed the index above two top-side trend-lines we had viewed as potential cappers to the up-move. These could turn into support should we see a gradual decline, but if we see a sudden, aggressive reversal in momentum then a correction could get under way as the market has once again reached into overbought territory. It’s a tough spot for traders; good risk/reward isn’t present at the immediate moment for either side of the market. 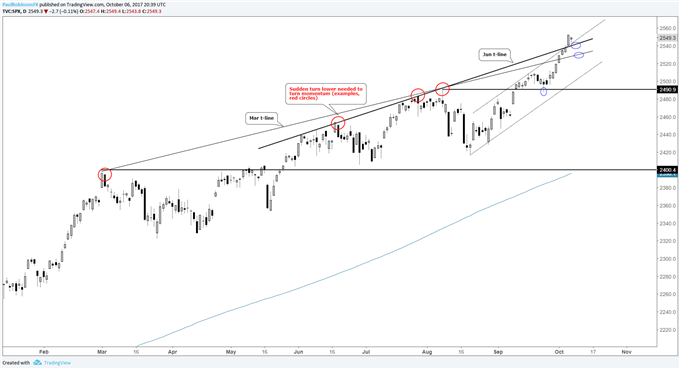 On the data-front looking ahead to next week there are no ‘high’ impact data releases. ECB President Draghi is slated to attend a panel discussion in Washington D.C., but what will come from that may be nothing of significance. For full details on timing of data/events and estimates see the economic calendar. A couple of factors are working right now for the DAX, weaker euro and generally strong appetite for stocks, globally. Look for euro and risk trends to be a factor this coming week.

Turning to the chart, the DAX managed to break out to new record highs last week on Wednesday and then treaded water through the close on Friday. Despite being in record territory there is reason to look for the German index to struggle in the week ahead. In the area of 13000/100 lies two long-term top-side trend-lines – 2000/’15 & 2015/’17. Watch how price action plays out in that vicinity, because it may set the stage for a minor pullback at the least. It’s been an extended move off the 8/29 low and a rest/pullback looks to be due. First line of support on a pullback comes in at the trend-line off the late-August low. 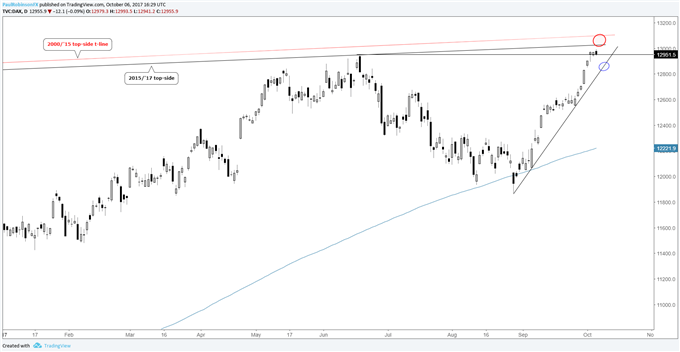 Similar to Germany, there isn’t a whole lot of data coming out of the UK next week. There is one ‘high’ impact release set for Thursday by way of the Bank of England Credit Conditions & Bank Liabilities Survey. As is often the case with data, look for the related currency – Sterling – to feel the brunt of any volatility which may flare up. However, a strong move out of sterling could very well spark a big move in the opposite direction in the footsie as the relationship between the two has become inversely correlated to the tune of -94% on a 1-month basis. That means the two are moving almost in tandem, just in reverse. However, keep in mind that doesn’t mean the size of the moves will be similar as correlation only measures the directional relationship, not magnitude.

On Tuesday, the FTSE broke back above the February 2016 trend-line as well as beyond the range set during August and September. This helped set the stage for the UK index to close out the week very close to its highs. Looking ahead, though, there is strong resistance to be contended with from 7550 up to the record high at 7599. This could be problematic in the week ahead should risk appetite diminish and the pound gather a strong bid (not see as likely at this time, though.) On weakness, we’ll pay close attention to how the market handles the recaptured 2016 trend-line, whether it can be held as support or not. 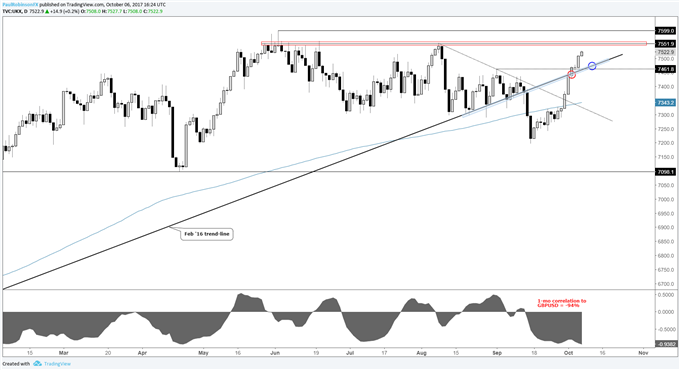