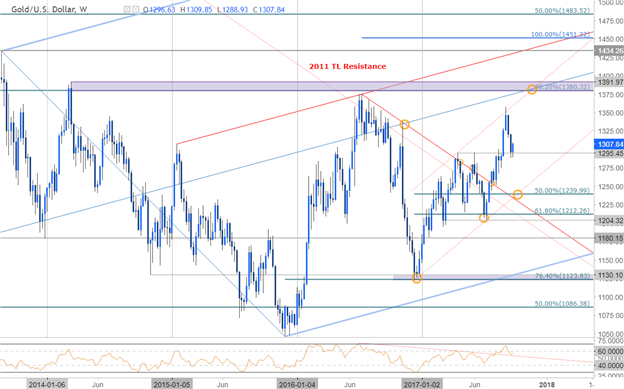 See the Full 4Q Forecast for Gold in the new Trading Guide posted on the DailyFX Guides Page.

Gold prices may exhibit a more bullish behavior over the remainder of the year as Federal Reserve officials adopt a less-hawkish tone and project a more shallow path for the benchmark interest rate.

Even though the Federal Open Market Committee (FOMC) appears to be on course to deliver three rate-hikes in 2017, Chair Janet Yellen and Co. now forecast a terminal interest rate well below 3.00% as ‘overall inflation and the measure excluding food and energy prices have declined this year and are running below 2 percent.’ The downward revision in the longer-run interest rate forecast suggests the FOMC is inclined to halt the hiking-cycle ahead of schedule, with bullion at risk of exhibiting a more bullish behavior especially as it breaks out of the downward trend from 2012.

Last quarter we noted that while the broader outlook for gold prices remained constructive, “the risk remains for a material set-back before resumption of the broader up-trend,” with our bullish invalidation level steady at 1209. Indeed the first week of the third quarter saw prices come under considerable pressure with gold rebounding sharply off (low registered at 1205) support and is poised to close the third quarter up more than 5.3%.

The subsequent rally and breach above slope resistance extending off the 2016 highs kept the long-bias in play with the advance reversing of channel resistance in early September trade. Interim support rests at 1295 with our broader bullish invalidation level now raised to 1240.

Gold prices could still see some downside early in the fourth-quarter but the focus remains higher while above 1267.

See the Full 4Q Forecast for Gold in the new Trading Guide posted on the DailyFX Guides Page.