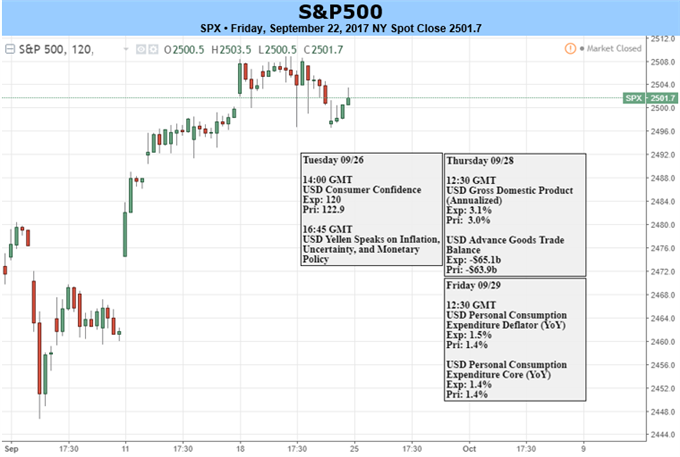 Last week, the FOMC outcome on Wednesday was decisively hawkish, with the central bank signaling plans to start unwinding QE next month, and projects one more rate hike for 2017 and three more to come in 2018. This mildly and only briefly upset equity markets as post announcement losses were erased and then some by the end of trade on Wednesday. The rest of the week resulted in a net-loss of 5 handles. Next week, we have a few ‘high’ impact data releases, but nothing likely to shake the market too much. For the full run-down on scheduled events, please see the economic calendar. The situation with North Korea is a constant threat to market sentiment, but has lost some of its impact for now. It seems a ‘real’ threat will be needed to put the market on its heels.

The S&P is still looking to hold onto the prior record highs from August, with the 2491 level on watch. As we noted earlier in the week, the trend and recent breakout favors higher prices, but a rally could quickly be capped by one of a pair of top-side trend-lines. One extends back to March and clocks in close to 2520, while the other crosses over highs since June and registers in the vicinity of 2430/35. They are moving targets given the upward slope. A strong undercut of 2491 would be reason to be cautious. 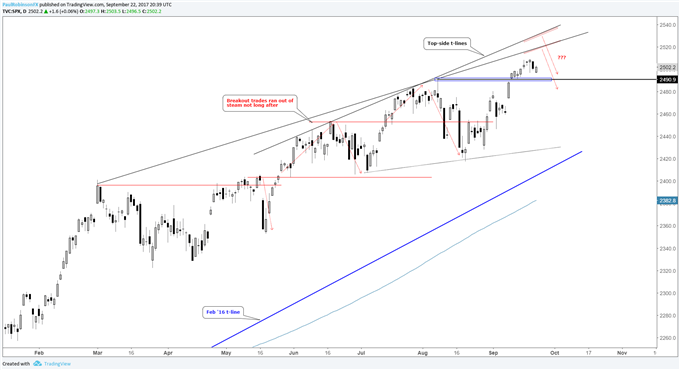 Last week, Draghi spoke on a couple of occasions but didn’t do much to shake up the euro or European equity markets. The euro did take a hit on the FOMC meeting, which likely helped give a small boost to European equities on Thursday. Looking ahead to next week there are a small handful of ‘high’ impact data releases, starting with German CPI on Thursday and then Unemployment figures on Friday followed by Euro-zone CPI just over an hour after. See here for full details on timing and estimates. The headline to start the week will be the German election even though it’s been a rather quiet campaign – Chancellor Angela Merkel is considered to be a ‘lock’ for another term. So, barring an upset bid it appears the market is unlikely to show much of a reaction.

Technically speaking, the DAX spent all of last week grinding higher following the big breakout above the 12300-area. There is resistance to contend with soon at a swing-high created in July at 12676. It could be enough to push the German index lower, but risk appetite globally is still relatively healthy and a stalling euro are reasons to expect no major swoons are nearing. Should we see material weakness develop, though, the once staunch area of resistance around 12300 will be looked upon as a source of solid support. A hold above is required to keep a bullish outlook intact. 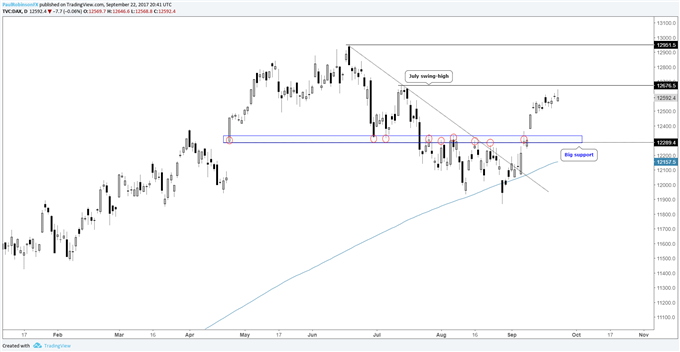 On Friday, Theresa May gave a speech regarding ‘Brexit’ and stood firm on the UK opting out as an EU member in March 2019. In total, her speech put a damper on sterling while giving the FTSE a boost. Looking ahead to next week there are few scheduled data releases, with none viewed as ‘high’ impact. Look for risk-trends to be a big factor.

Looking at the technical aspect of the FTSE, it’s the one major global index which stands out as having a somewhat bearish tilt. The breakdown below 7300 following the BoE meeting was viewed as an important event. May’s speech helped push the footsie right back up into that area now viewed as resistance, and closed Friday firmly up against it. It’s worth noting the high of the day came right at the 200-day MA. If we are to see the recent break of significant support hold true the UK index is going to need to start turning down to start the week. If, however, it can recapture broken support we may will at least be forced to turn a bearish outlook to neutral until further developments. 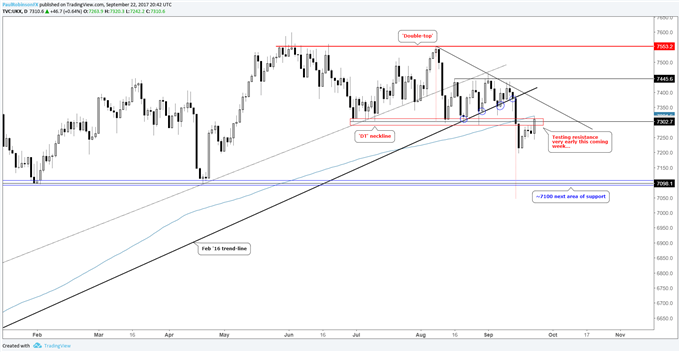