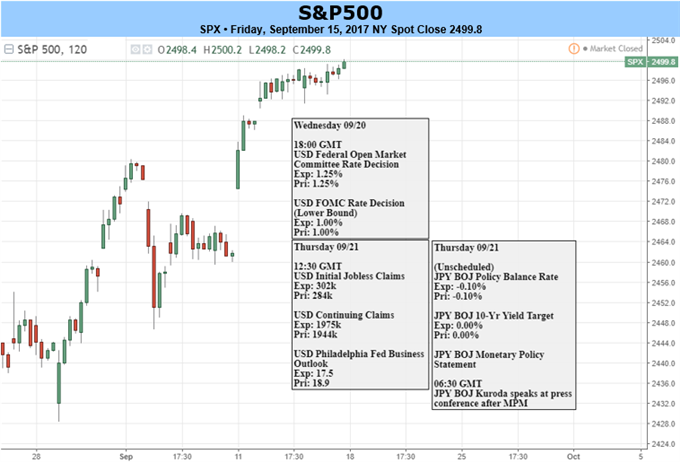 This coming week will be about the FOMC meeting on Wednesday. Rates are expected to remain unchanged, so the focus will be on the Fed’s expectations moving forward. As per the CME FedWatch Tool, at this time there is over a 51% chance they will hike rates by 25 bps in December. Will expectations get boosted or dampened on Wednesday? Outside of the Fed meeting, there are no ‘high’ impact data events on the calendar. For all other data release details, please see the economic calendar.

Last week brought fresh record highs on Monday’s sharp rally, but for the remainder of the week the market treaded sideways. This can be largely viewed as constructive as sellers remained at bay. Looking higher, focus turns towards a pair of top-side trend-lines. The first of which arrives in the vicinity of 2515, running across the March and July highs. The second trend-line, due to the several inflection points from June to August, could hold more potency as resistance. It comes in around the 2525-mark. A break below the old record high at 2491, barring momentum isn’t fierce, won’t cause any real technical damage. At this juncture, a sharp break lower followed by a failure to recover (something we haven’t seen in a while) will be required to flip the script on a bullish bias. 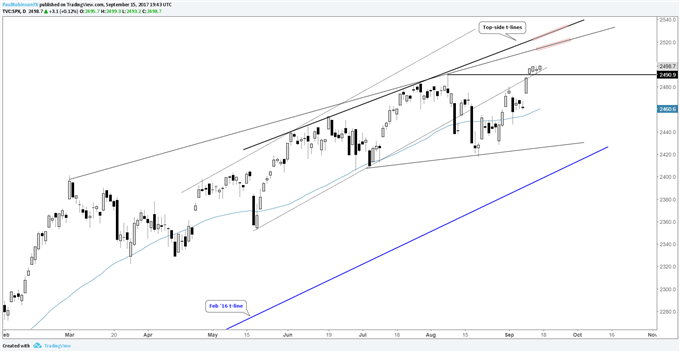 The only data of major direct significance this coming week comes out on Tuesday with the release of the Euro-zone and German ZEW surveys. ECB President Mario Draghi will be speaking in Frankfurt Thursday and participating in a roundtable discussion in Dublin on Friday. Depending on how violently U.S. markets react to the FOMC meeting on Wednesday, we might see the DAX gap in sympathy Thursday morning. See the full economic calendar here.

The German benchmark index underwent a strong breakout on Monday when it gapped above the area surrounding 12300. The gap higher was greeted with aggressive buying for the remainder of the session, but fizzled after another gap on Tuesday. Like the S&P 500 it spent the remainder of the week churning sideways, which is viewed as a positive with no sellers emerging. The next objective on the top-side comes in at the July swing-high at 12676. A pullback will be viewed as healthy as long as it doesn’t violate the area from which it just broke free from. A drop back below 12300 would be cause for alarm. 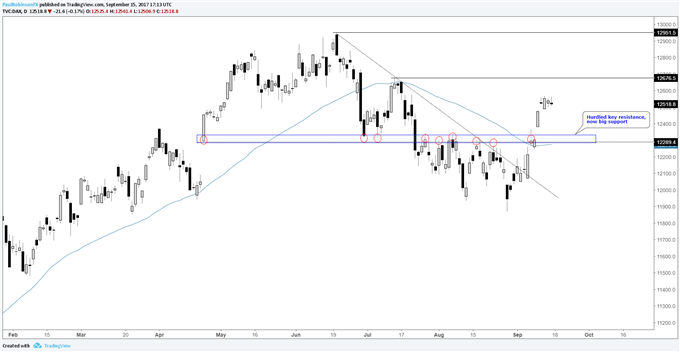 Last week, the Bank of England voted to stay at a record low 0.25% in its benchmark rate as expected by a vote of 7-2, but did have a more hawkish than expected tone in its statement. This sent the British Pound soaring and the FTSE sharply lower. The calendar is light in the week ahead, with the one possible reaction coming on the open Thursday should we see a sharp move out of the U.S. the day before on the heels of the FOMC meeting.

The BoE outcome kick started what became a pretty significant price break in the FTSE 100. On Thursday, it cleanly broke the February 2016 trend-line, but the drop through 7300 on Friday was even more damaging. It’s an important level which marked strong horizontal support back to the end of June, the neckline of a double-top formation, and the 200-day MA. Old support becomes new resistance from here on any bounce. The next level of significant support arrives around 7100, with the projected double-top measured move target down at 7050. More weight is given to 7100 given it’s an actual price level and not a projection. 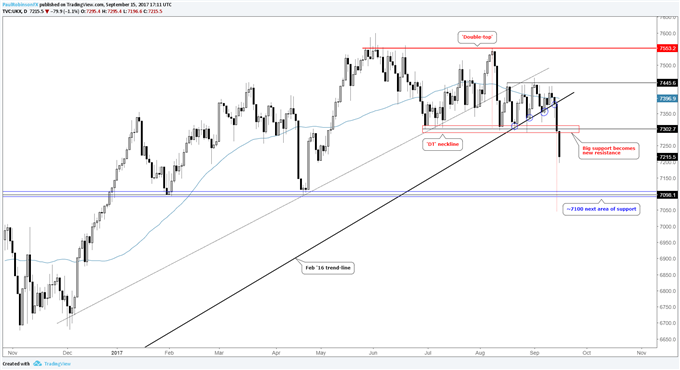