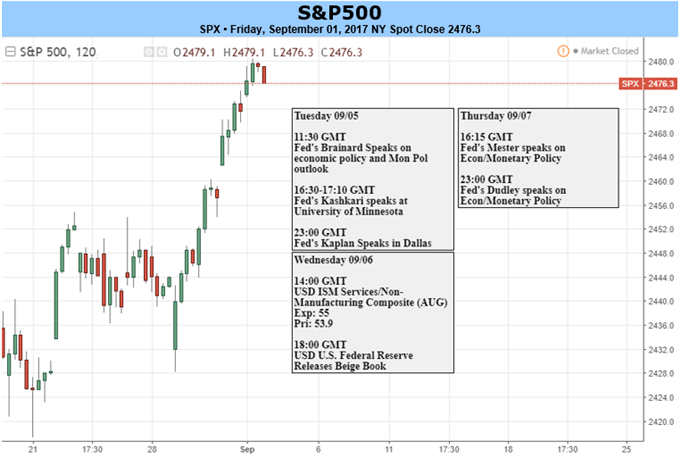 On Friday, U.S. jobs data for August came in weaker than expected, with the headline NFP figure at +156k compared to the +180k estimate, while the July number was revised lower to +189k from +209k. Unemployment ticked higher to 4.4% from 4.3%, and average hourly earnings remained even at +2.5% YoY, but slightly below the 2.6% expected. The report capped off a week where we saw a gap-down open on Tuesday in reaction to North Korea firing a missile over Japan. The theme recently has been for escalations with NK to be brief and market weakness to be short-lived, and so it was again last week. The market’s response to lower prices was the strongest so far since the situation with NK began flaring up last month.

To start the week, U.S. stock markets are closed in observance of Labor Day. Once they reopen Tuesday, general risk trends could be the driving force behind price fluctuations with the economic calendar light on ‘high’ impact data events. The biggest data release comes on Wednesday when ISM Services/Non-Manufacturing Composite for August is released. For data release details, see the economic calendar.

From a technical perspective, we continue to see good buying pressure on dips, and with that a bullish posturing as record levels lie not far ahead. While it is a bit too soon to take into serious consideration, one scenario we could see come to fruition is a ‘head-and-shoulders’ top. But for this to take shape we will need to see the market turn down almost immediately if it is to carve out a ‘right shoulder’. We’ll expand on this scenario at a later time should it become relevant. If the S&P doesn’t start rolling over and can take out the prior record high at 2491, the psychological 2500-level is likely to come into focus quickly. Beyond there no resistance lies until an upper parallel extending higher over peaks starting back in June. 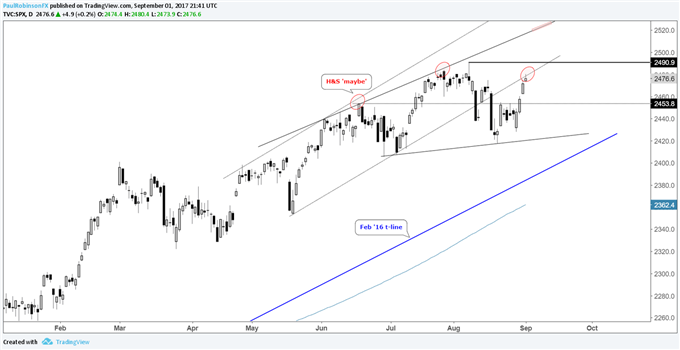 This coming week, the big event will be Thursday’s ECB meeting and how Mario Draghi and company plan to handle the current monetary policy and euro strength. Via Bloomberg on Friday, the ECB said it may not be ready to make a final decision until a couple of weeks before the current program expires. This put pressure on the euro after it initially rallied on weak U.S. jobs data. A euro decline could certainly help bolster European indices higher, and if general risk appetite picks up momentum there may be a double tailwind. For details and release times on all economic data this coming week, please see the economic calendar.

On Friday, the DAX reacted to the euro’s gyrations surrounding the U.S. jobs report and ECB news. More broadly, the index is trying to climb above the trend-line running down off the June high and if it can maintain above, there is a little room to run before running into substantial resistance surrounding 12300. If the German benchmark can move this critical area of resistance the bearish implications of the ‘head-and-shoulders’ pattern will effectively be put to rest. Should we see a failure to gain traction, levels below 12000 touched last week will become focus as near-term support.

The calendar holds only one ‘high’ impact data release this coming week; BoE/TNS Inflation for the next 12 months will be published on Thursday. General risk trends are seen as a key driver for the coming week.

Technically, the FTSE is somewhat of a mess these days, providing no real directional clues to hang our hats on. Last week, on a short-lived ‘risk-off’ event (North Korea missile launch) the UK index probed below important support at 7300, but managed to close above it and the trend-line off the July 2016 low. As long as the footsie holds above the 2016 trend-line and 7300 the outlook will remain neutral to bullish, with potential for a move back to around the 7550-area where it stalled from in the early-part of August.