- The British Pound’s effective exchange rate index has fallen to its weakest point since November 2016 as the Brexit talks between the UK and the EU become increasingly acrimonious.

- While monetary policy will remain the key driver of the currency, a lack of progress in the negotiations could well undermine it.

An effective exchange rate index for the British Pound, calculated by the Bank of England, has dropped to its lowest level since early November last year – illustrating the overall weakness of the currency despite its appreciation against the US Dollar in the current year to date.

This has been due primarily to a growing perception that the BoE will leave its monetary policy settings unchanged while the economy is growing slowly at the same time as inflation remains above target. However, the latest comments from Brussels, where a third round of Brexit negotiations between the UK and the EU is taking place, are also undermining it. 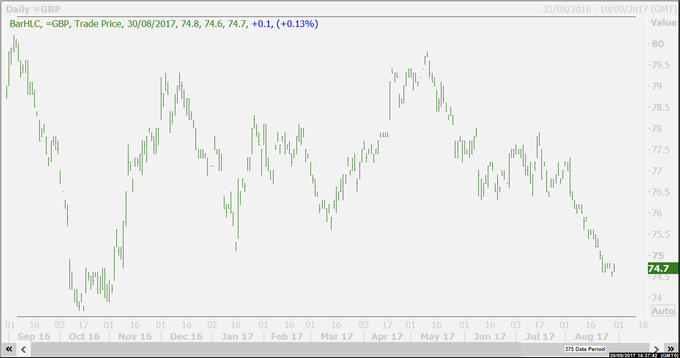 In the past few days, Michel Barnier, the EU’s chief negotiator, has been forthright. “We must start negotiating seriously. We need UK papers that are clear. The sooner we remove the ambiguity, the sooner we’ll be in a position to discuss the future relationship… I am ready to intensify negotiations over the coming weeks,” he told reporters.

European Commission President Jean-Claude Juncker was equally undiplomatic. In a speech to EU ambassadors he said he had read all the papers produced by the British Government with the “requisite attention”. “None of those is satisfactory,” he said, “so there are an enormous amount of issues that need to be settled.”

Barnier’s comments were described by the British government as “ill-judged and unhelpful” while the Eurosceptic newspaper The Daily Telegraph was apoplectic. “Who do they think they are? The attitude of these two unelected apparatchiks displays all the unaccountable arrogance that has put so many people off the EU, and not just in Britain. Were the voters in some other countries given a referendum on continued membership, the chances are the result would be the same as it was here,” it roared.

While this position-taking by the two sides was inevitable, the ferocity of the early skirmishes has been surprising and could well bring a hard Brexit without an agreement between the two sides closer. In due course, that could weaken the Pound even further.