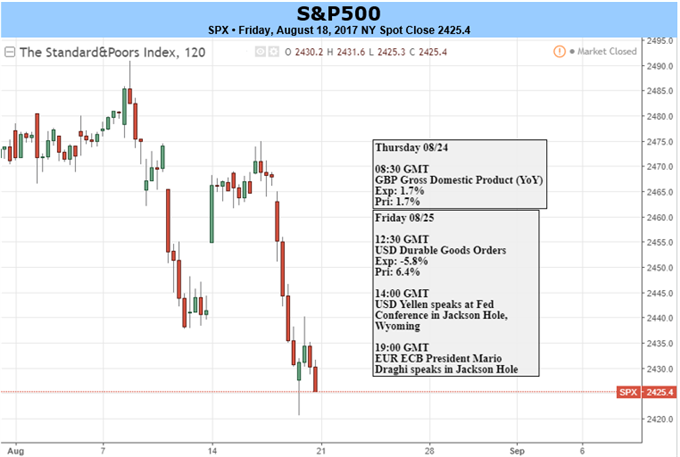 Looking ahead to next week, the economic calendar is lacking in significant data points. The only ‘high’ impact release is Durable Goods Orders (July) on Friday. The more impactful event of the week is also on Friday when Fed Chairwoman Janet Yellen is set to speak at the Jackson Hole economic policy symposium at 14:00 GMT time. For a schedule of all data releases, see the economic calendar. To join in on our roundtable discussion Friday at 12:15 GMT regarding econ data and Jackson Hole, sign up here.

From a technical perspective, the market failed hard on Thursday, posting a lower high and a subsequent lower low. The drop left the market closing the week just a shade under the trend-line running higher since December. How the market responds early in the week could be important for how events unfold for the remainder of the week. If we don’t see an immediate rebound look for a move towards 2400; just above this threshold is fairly significant given its influence as resistance in May and then support on three occasions since then. If a decline below support ensues then the February 2016 trend-line will likely come into play. At that juncture, an even broader lower low (under the June low) will be in place; we haven’t seen a break of that type in the bullish sequence of higher highs, higher lows since last year. Looking higher, on a bounce the market will have resistance to contend with just over 2450, then the upper parallel off the reversal-day high back on the 8th. Bottom line, the market begins next week as it did last, in a precarious position. 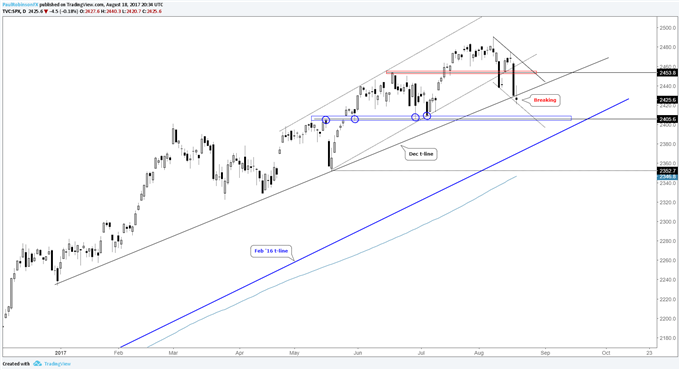 Find out what’s driving global equity markets this quarter in our 3Q Report.

We have a few key events on the economic calendar next week, starting with the release of both the Euro-zone and German ZEW Surveys on Tuesday, followed by Draghi speaking in Germany on Wednesday and also appearing on Friday in Jackson Hole. Keep an eye on how the euro trades as it has been weighing on European indices since rising sharply over the past few months.

The DAX will remain vulnerable as long as it trades below staunch resistance surrounding 12300. It’s an area the market has recently struggled to trade above on numerous occasions. Just ahead of key resistance is the trend-line running down off the June high. This is all occurring within the context of a triggered head-and-shoulders formation back in July. Support arrives around 11950/35, where the 200-day and 8/11 low lie. Should that fail to hold we’ll look to 11850 and then the measured move target of the H&S formation at 11600. It’s a derived target based on the height of the bearish formation, but actual price support doesn’t arrive until around 11480. To reach down to those depths it is likely that we are seeing a full-on global risk-off environment. 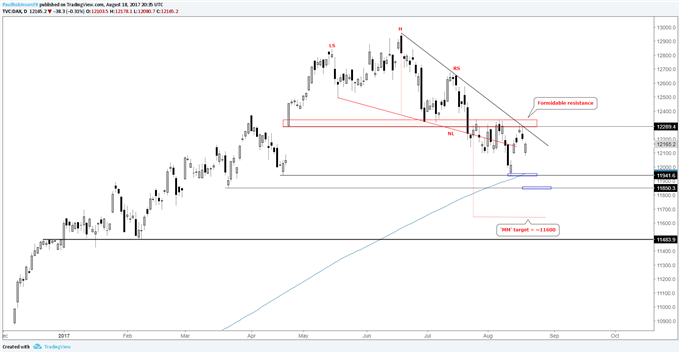 The economic calendar for the U.K. is especially barren, with the only ‘high’ impact data slated for Thursday when the preliminary GDP figures for 2Q are due out. General risk trends are seen as the key driving force in the week ahead.

To start last week the FTSE bounced from support right around 7300, but by the end of the week it closed again down near this critical level. The broken 2016 trend-line was only recaptured for a day, proving as a failed recapture. It will be important for 7300 to hold, or else for the first time since last year a lower low will be carved out along with a trigger of the double-top formation. On a close below 7300 the 200-day MA at 7254 will come into play, but with the lower low and beak of the ‘DT’ it may not provide much support. The next significant level to look to then will be right around 7100, which turned out to be key turning points on three occasions since October. To turn the picture positive work will be required, and overall the best case at this time appears to be a hold of 7300 and a neutral outlook. 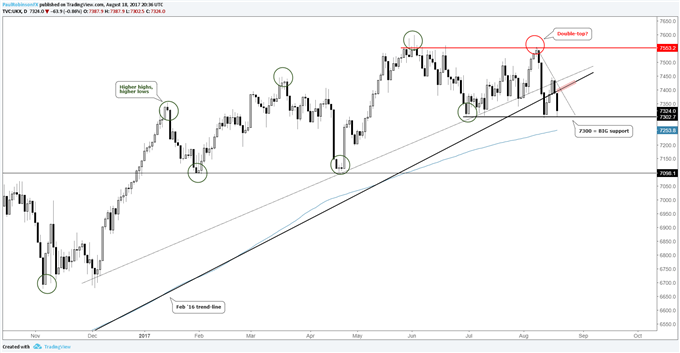