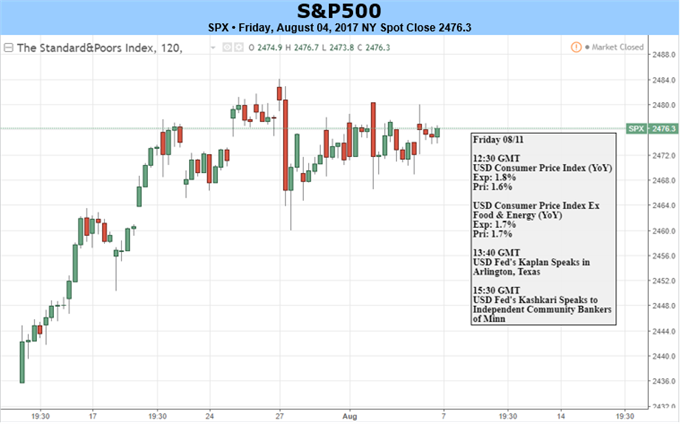 The jobs report on Friday brought fireworks to plenty of markets – FX, rates, precious metals, DAX on euro selling, but did little to inspire market participants to make any major moves in U.S. equities. It was a rather ho-hum Friday in a light summer tape. Looking ahead to next week, the economic calendar is relatively light, with the only ‘high’ impact scheduled data not until Friday when July CPI figures will be released. The meat of earnings season is over, so there will be a catalyst from July which will be missing. Headlines pertaining to the Trump/Russia situation may cause sporadic gyrations, but don’t look for them to be lasting.

Overall, from a technical perspective the S&P 500 is holding steady in record territory after running for most of July. At this juncture, it’s set up for higher prices as long as the consolidation period can hold above the July 27 spike-day low at 2460. But even if the market does attract selling there is good support down around the old June record high at 2354, then the May parallel not far below there. A drop into lower levels may offer an attractive spot for traders to look to enter long. On further strength from here we’ll look to the underside of the November slope as resistance, a line which kept the market in check on the upside during July. Overall, the outlook is constructive but with a neutral slant to it as we continue to work our way through a period (late summer) when market participation tends to be low sans any type of major catalyst. 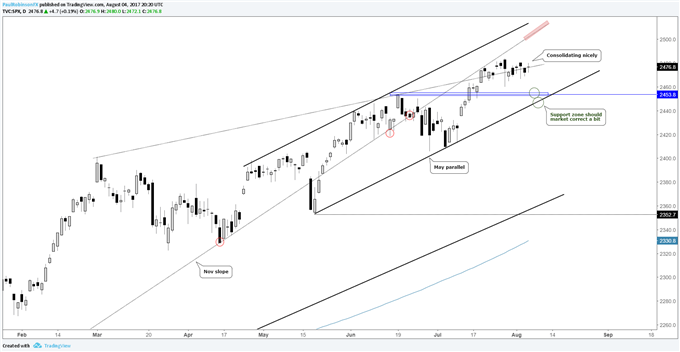 Looking ahead to next week the economic calendar is lacking in ‘high’ impact events. One of the focuses may be on how the euro responds to last week’s intra-week reversal, with all the prior four days of gains wiped out on Friday on an upbeat U.S. jobs report. The inverse correlation between the DAX and the euro has been strong for a while now (3-month at -88%), but its power was highly visible intra-day on Friday. The German benchmark index shot higher quickly on only initial minor weakness in the euro, and the buying was only amplified as sellers showed up in earnest in the single-currency. This will be a factor certainly worth keeping an eye on in the week ahead.

The DAX has been one of weaker major global markets for a few weeks now since topping in June, even triggering a bearish ‘head-and-shoulders’ top. The question will be whether the Friday rally and recapture of the neckline of the formation will lead to more buying. There is still work to be done to turn the technical outlook positive, but a weak euro may be the beginnings of providing bullish underpinnings to do so. To start the week, though, there is strong resistance around the 12300-mark to contend with, and with a move beyond that threshold arrives the trend-line off the June high. Should we see Friday’s rally fail, then last week’s low at 12092 is the first level of support to look to, followed by the April gap-fill at 12048, 11941, 200-day at 11977, and then a swing-low at 11850 from March. If the H&S formation is to gain traction again the measured move target is set at 11630. 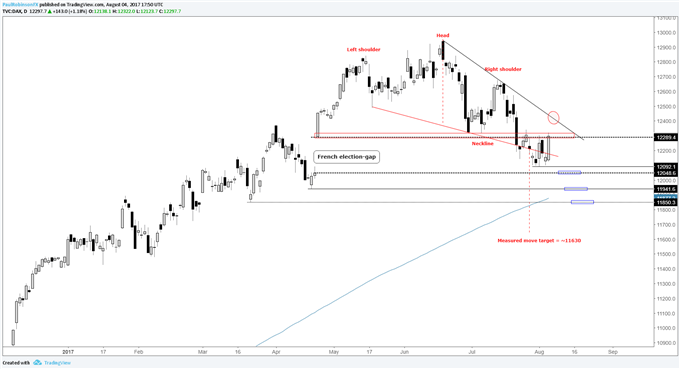 The economic calendar is a light one for Japan, with no ‘high’ impact data events on the docket. General risk trends may be all the market has to lean on in what has been a very uneventful trading environment in the Nikkei. That could soon change, though, if the symmetrical triangle developing makes a clean break. The consolidating triangle is set up to lead the market in the direction of the prevailing trend prior to its development. But it will be important to wait for a confirmed break in either direction. It’s possible the consolidation formation is a distribution pattern setting up for a downside break. A top-side break will bring the June high at 20318 into focus, while a downside break will shift focus on support surrounding 19600. Until we see a break the outlook will remain neutral. 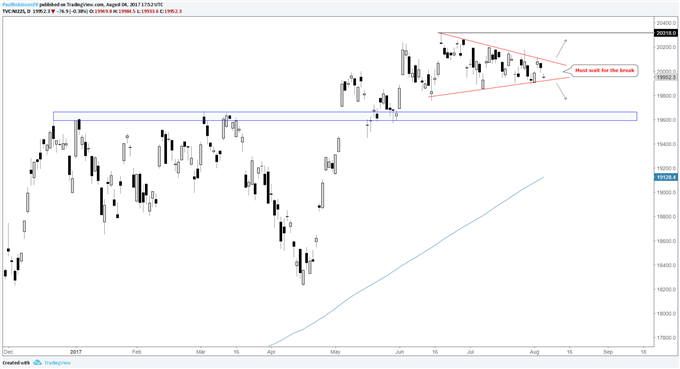