- More losses may be on the cards as traders book profits.

After a blistering start to trading early Wednesday, which saw the new digital token Bitcoin Cash (BCC) touch a near $750 peak, selling pressure has set in, driving BCC back down to around $425. In the process, BCC’s market capitalization is only marginally higher than fourth-placed cryptocurrency Ripple (XRP) after dwarfing it less than 24 hours ago.

And it is not surprising that a level of profit-taking has hit the market after the new coin was effectively a free present to holders of the original Bitcoin token (BTC) prior to the hard fork on August 1. According to other market participants the price of BCC could fall further as some holders have yet to receive their new tokens, leaving sellers backing up in the market.

While the new Bitcoin token has swung wildly since inception this week, the ‘old’ token has remained fairly muted. On the daily chart, BTC has however broken above the 76.4% Fibonacci target of $2699 and a close above here could open up a renewed swing at the $2980 all-time high, with pause for thought at the two recent highs between $2915 and $2935.

The long-term value of the new Bitcoin token however will ultimately be decided by the cryptocurrency community and the amount of computing power and development, they put to work on the blockchain. If we look at the example of the Ethereum ‘hard fork’ – sparked by the Ethereum ecosphere being hacked – then the new token may fare better than market expectations. In the Ethereum space, the new chain (ETH) gained popularity far quicker after the original (ETC) after the chain split. The new ETH is currently trading at $226 and has a market capitalization of $21.2 billion while the old token ETC is currently changing hands at $15.27 and has a market capitalization of $1.44 billion. 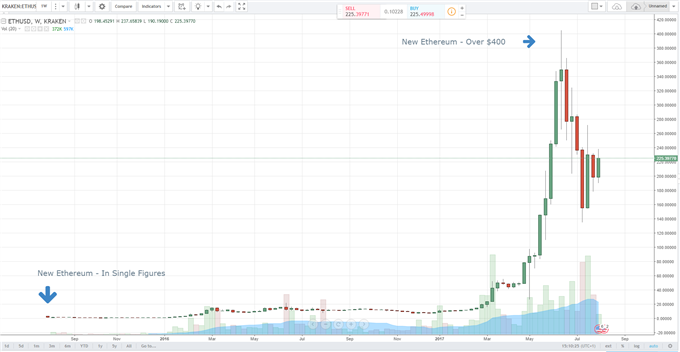