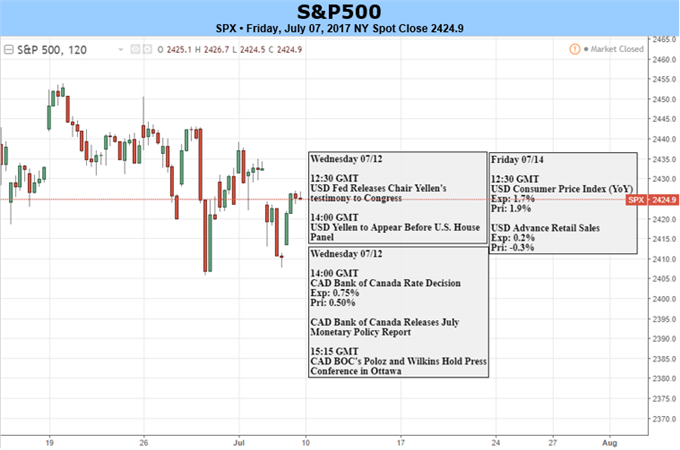 To conclude last week the market responded positively to the mixed June jobs report – while the headline NFP figure was a solid beat at +222k vs. the consensus estimate of +178k, wage growth (inflation indicator) was slightly lower to 2.5% YoY from the 2.6% expected. Looking ahead to next week, the big event will be Fed Chair Janet Yellen testifying before Congress and the U.S. House Panel on Wednesday, and then she’ll appear before the Senate Banking Panel on Thursday. Key data prints in the week ahead are CPI, Retail Sales, and UofM Confidence on Friday. Full details, check out the economic calendar.

Technically, the S&P has been flirting with a breakdown below key support around 2405 after breaching the November trend-line on Thursday. Friday’s rally put the trend-line back into play, and could be signifying that the market is still in a consolidation phase rather than rolling over. If that is the case, the market may not shoot right back to a new high but rather chop around some more before eventually breaking out to fresh record levels.

A clean close below 2405 will likely spur selling pressure. If we see a break, then look for the December slope to possibly add support, but the major focus at that point will be the May low at 2352 and the February 2016 trend-line.

What will drive global equity markets this quarter? Check out our Q3 Forecasts.

Looking ahead to next week, on the data-front the calendar is lacking in ‘high’ impact events. Global markets may respond to Yellen’s testimony on Wednesday and Thursday should she shake things up in the U.S. For a list of ‘low’ to ‘medium’ impact events, see the economic calendar.

The technical posturing of the DAX is precarious, with it ending last week below key resistance in the 12486/537 zone and just above the gap created on the first round of the French elections. If we see a break of 12289, the top of the gap, a fill could come quickly down to 12048. The CAC 40 is already well inside the gap, increasing the likelihood the DAX is soon to follow. A break above the before-mentioned resistance zone doesn’t open up an outright bullish scenario, but it will tilt the chart away from seeing the gap fill for now.

Looking ahead to next week, the Bank of England Credit Conditions & Bank Liabilities Surveys on Thursday is the only ‘high’ impact event slated. The FTSE may respond to Yellen’s testimony should we see her words sway U.S. markets. For all event details, refer to the calendar.

For the past month, the footsie has been one of the weaker global markets. Towards the very end of June the index broke down below the 2013 top-side trend-line, which we were viewing as a substantial source of support. Shortly after that break, the June/’Brexit’ trend-line was breached as well. Recently the trend-line was tested but the market turned lower in short-order. Overall, recent develops continue to shed a negative bias on the FTSE. There is solid support at 7302, but it is unclear how much longer that can hold given staunch resistance just ahead and the trend over the past month. A break of 7302 will quickly bring the February 2016 trend-line into focus. A break of this long-term line could bring about aggressive selling. To turn the view positive, there is much work to be done, with a solid move over 7386 and the 2013 trend-line needed. It’s a lot to ask given the current environment. Keep an eye on risk trends in general, as said regarding the S&P 500 and DAX, other major markets may be on the verge of declining.