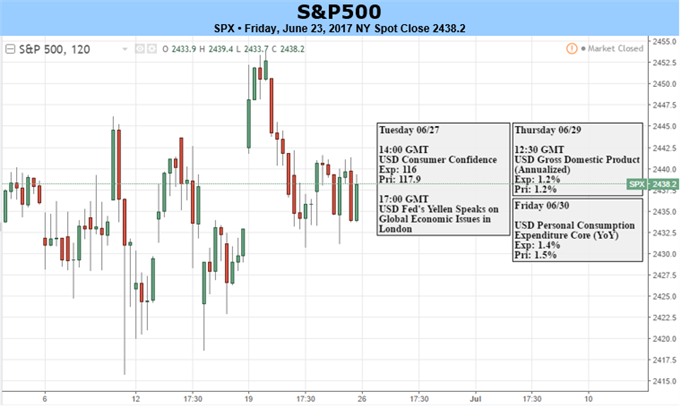 Major Global Indices Need to Prove Themselves Early This Week

This past week was light on the data front, and offered little in the way of event-driven volatility. Looking ahead to next week we a have few ‘high’ impact events on the docket. On Wednesday, we have Advance Goods Trade Balance for May, Thursday we get Q1 GDP, and on Friday Core Personal Consumption Expenditure (PCE). For details on other scheduled data releases, see the economic calendar.

Momentum has been quite tepid, but the trend still consists of short-term higher highs and higher lows. The S&P is hanging onto the November slope by a thread. This will need to hold if the market is to keep from breaking its fragile upward trend, and slipping towards 2416 and the November trend-line. But as long as support holds early in the week, a push back towards record highs at 2454 may develop. Expectations for a momentum-move on a breakout are low given the low-volatility environment, and looking beyond the recent record high the March top-side trend-line near 2465 could quickly come into play. 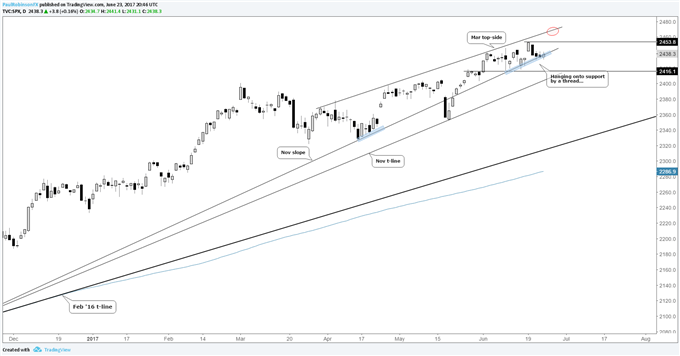 What’s been driving stocks as the quarter comes to an end? Check out our market forecast for details.

Looking ahead to next week, in terms of ‘high’ impact data we have German CPI on Thursday and on Friday German Unemployment Change along with Euro-zone CPI. See the economic calendar for details.

The technical picture for the DAX is one which is deteriorating. Last week, after a quick ‘gap-n-trap’ following the breakout of the ascending wedge, it ended on Friday slipping just below the bottom of the wedge. The fact it broke higher out of the pattern in a bullish manner then down to just beneath the bottom of the formation suggests we may be in for weakness in the week ahead if we don’t see a turnaround in short-order. Close at hand is the December trend-line, as well as the 6/15 low at 12621. A break of both of these technical levels would likely spark downward momentum, with 12490 in sight as well as the glaring gap from the first round of the French elections. If, however, it turns out that Friday’s slip below the bottom of the wedge was just another head-fake, we could be in store for some more choppy trading conditions with a generally neutral bias.

The only key data point next week in the UK comes on Monday when BBA Loan for House Purchases is set to be released. For details and a line-up of all other events, check it out here.

Looking at the technical landscape, the FTSE continues to press down on major support surrounding 7400, where the 2013 top-side trend-line and several inflection points from recent months lie. It will be crucial for the near-term and potentially intermediate-term that we don’t see aggressive selling through this increasingly important area of support. If the footsie slips below, the June/’Brexit’ trend-line may offer support, but given that will require a break of an even more important level of support it is questionable as to whether it would hold. Looking higher, if support holds there isn’t significant resistance until last week’s high at 7561 and then the January/March top-side trend-line.