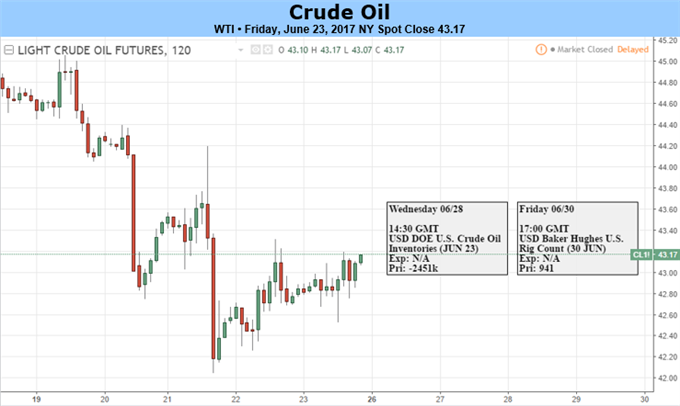 The correction in Crude Oil continued this week as prices entered ‘bear market’ territory, marked by a move-lower of 20% or more from the 52-week high. WTI set a fresh 10-month low while Brent moved-down to a new 7-month low with prices in both markets falling below a series of key support levels in the process.

A bit of hope developed on Tuesday afternoon leading into Wednesday morning as two key gauges of Oil supply indicated contraction. The API U.S. oil inventory report on Tuesday afternoon showed a drawdown of 2.72 million barrels, almost entirely offsetting last week’s build of 2.75 million. This provided a brief amount of strength for Oil prices as we walked into the EIA report on Wednesday morning, and after a second consecutive weekly drawdown was reported, a very temporary reprieve began to show around the anxiety of a global supply glut. But also within that EIA report was a rise in U.S. Oil production of 20k barrels/day in the prior week, and this is what seemed to really grab markets’ attention as sellers took control of Oil prices shortly after the release of the report.

Normally, a weekly drawdown of 2.5 million barrels would stoke bullish demand with some follow-thru potential; but on Wednesday, that topside move was short-lived as sellers merely used the pop-higher to position in to short positions at better prices. No more than two hours that EIA report on Wednesday and Oil prices had already moved-down to set fresh 2017 lows, with WTI testing below a long-term Fibonacci level at 42.89.

Monthly Chart of US Oil with Trend-Line, Fibonacci Retracement Applied

For Oil bulls this should be a concern as even bullish indications, like a supply drain, are failing to quell the month-long sell-off. That sell-off began right as the OPEC/Non-OPEC extension of production cuts were announced in May, and since that resistance was set – bids have been a fleeting theme for Crude Oil prices and this has led to the thought that an eventual re-test of the $40-handle may be in the cards; and if that can’t hold, major problems may be ahead.

Next week sees the expectation for another supply drop in the United States as inclement weather in the Gulf of Mexico is expected to have hampered production. The key focal points for Oil prices for next week are the API weekly U.S. oil inventory report on Tuesday at 4:30 PM ET, the EIA report on Wednesday at 10:30 AM ET, and the Baker Hughes Rig Count on Friday at 1:00 PM ET. Traders will surely be looking to gauge whether the recent fall in prices has started to disincentives producers, but the bar is incredibly high to reverse what has already turned into an aggressively bearish move. 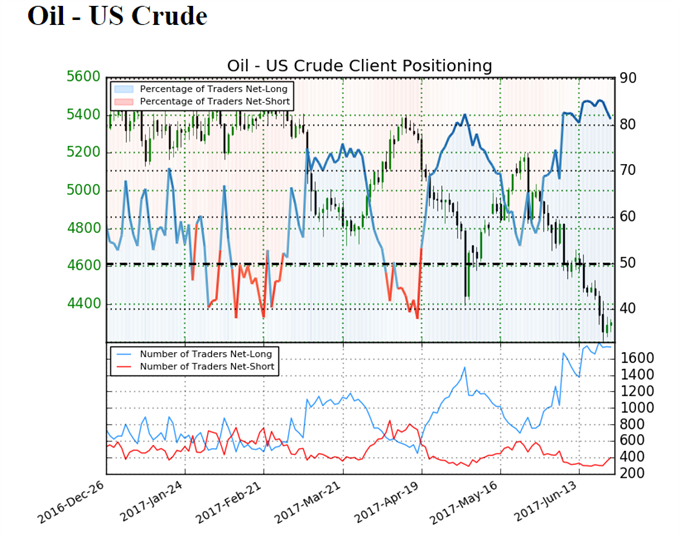 Of particular note for trend continuation theses is the current bullish stance of retail traders. IG Client Sentiment is currently showing an imbalance of 4.33-to-1 as retail traders are continuing to try to call a bottom. Given sentiment’s contrarian nature, this would be yet another bearish factor for Crude Oil prices as we move into next week.

The forecast for Oil prices for next week will be held at bearish.