Before the Financial Crisis that would lead to a global liquidity injection through multiple central banks to the tune of an estimated $18 trillion, the Fed’s balance sheet was ~$880 billion. At the time, the balance sheet was uneventful and consisted of Treasuries and currency in circulation as before August 2007, few banks needed and fewer banks wanted to borrow from the Federal Reserve due to the perception at the time that accessing the Fed Discount Window was feared to have on the market. Borrowing from the Fed was seen as the equivalent to admitting insolvency.

Why the balance sheet stayed below $1T for so long

Banks hesitated to access the Fed discount window and were hesitant to ask the Fed (at the time) to give them liquidity relief by buying their “toxic” assets. As you can imagine, the hesitation is the same reason that many banks have a difficult time raising equity in times of financial panic. Banks often hold illiquid long-term assets and liabilities. If impairments (reduction in market value of assets) develop, banks often need to raise equity or access the Fed’s Discount Window (seen then as a last resort) to be able to support those falling asset prices. However, due to seniority of capital, in the world of falling asset prices, equity investors are the first to get wiped out if the assets are debt-financed, which is common practice around the world.

How we got here: A $3.6T increase does not happen overnight 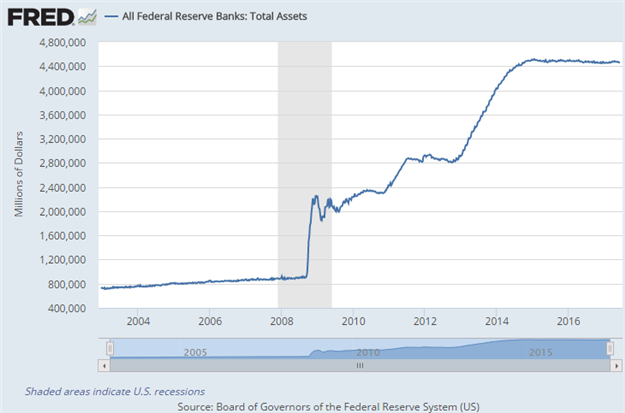 During multiple QE programs, the Federal Reserve took the balance sheet to $4.5 trillion of assets by adding $2.5 trillion of Treasuriesin an effort to drive down rates (they succeeded there) and $1.8 trillion of mortgage-backed securities that were a fundamental problem of the financial crisis in the first place. The balance sheet asset level topped its precipitous rise in October 2014, a little more than a year before the Fed would begin normalizing rates by taking the Fed Funds rate off the zero-bound floor to become one of the first central banks to end their zero-interest-rate-policy (ZIRP). The balance that took the Fed’s Balance sheet to the current level was a near doubling of Currency in Circulation, which the Federal Reserve Bank of St. Louis shows to currently be near 1.5Trillion and on the rise.((US), 2017)

Near-Doubling of the Federal Reserve’s Currency In Circulation 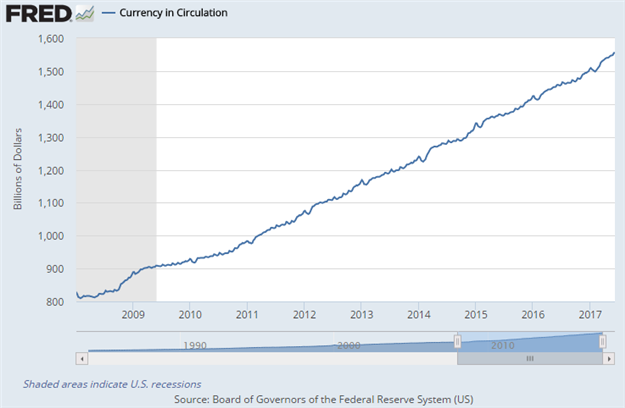 Source: Source: Board of Governors of the Federal Reserve System (US)

Ben Bernanke in a Brookings post noted in accordance with the Bank for International Settlements that there has been an emerging dollar shortage(Bernanke, 2017). As the reserve currency, the Fed has intervened by providing liquidity through swap lines to help ease some of the dollar tension. You can see on the chart above that the increase of ‘Currency in Circulation’ has been steady and based on the Fed’s policy path to continue raising rates, the trend could remain.

What is the Sequencing?

After the June 14 meeting where the Federal Reserve raised the upper bound of the Fed Funds Rate (FFR), they will only have two meetings left this year of four total that will be followed by a press conference. Historically, the Fed has only acted when they have had a press conference to provide forward guidance and ensure the market that they do not intend to “pull the rug” from under the market by tightening too aggressively. However, the question remains, which will they do first, begin the roll-off the balance sheet or raise rates again?

The two meetings with a post-statement press conference is September and December. It is expected that one of the meetings (likely September) will begin the process of reducing the balance sheet, that is not expected to stop unless a sharp downturn in the market warrants, and other with another 25bp rate hike.

After the June 14 FOMC meeting, there looks to be a market pricing of ~10% chance that the next hike will be in September and a near ~45% chance of a December hike per Bloomberg. Extrapolating this, we could view the September meeting as the likely meeting to hear about the initiation of the Balance Sheet reduction and the December meeting as the opportunity for the Fed to hold their word on the last of three 2017 rate hikes. If inflation does pick up later this year as Yellen anticipates, December does make more sense for rate hikes as the market is expecting.

Will the reduction in the Fed’s balance sheet lead to credit contraction?

You can bet that it is the Fed’s intentions not to have the balance sheet run-off lead to a contraction of credit conditions. Central Bank speeches will be focused for details on the final terminal value of the balance sheet. Earlier this year, former-Chairman Ben Bernanke said that the economy could expand into the current balance sheet levels or that they allow a simple run-off where the Fed fails to rollover issues that is designed to lead to little turbulence in markets.

Another Bernanke comment worth mentioning is the when the Balance sheet was growing, then-chairman-Bernanke said that a $1T increase in the Fed’s Balance sheet would be the near-equivalent of a 75bp cut in markets. Therefore, investors will look to see if a ~$1T run-off in the balance sheet is equivalent to a ~75bp hike. If so, you can imagine that USD strength could be a persistent trend, which could be offset with a rising of the ‘Currency in Circulation’ component.

As noted earlier and as heard from numerous Federal Reserve speeches, the last thing the Fed wants to do is cause a recession after they worked so hard to pull us out of the previous one. However, this does not mean they’ll succeed. What is important to note, is that the Fed is not looking to be an active seller in the Treasury Market, and they are expected to simply let issues roll to maturity and not reinvest, thereby reducing the investment holdings of the Fed Balance Sheet to Currency in Circulation & Bank Reserves.

The balance sheet runoff is anticipated to be persistent, predictable and passive, and any subsequent weakness in the US economy would likely be treated by lowering the Fed Funds Rate, which would cause USD volatility if seen. The details that are hotly anticipated is the level that the Fed deems as an appropriate run-off target, but that seems to be $2.5-3 Trillion, so the Balance Sheet shrinkage could be less than many expect.

To see our Dollar forecast, check out our popular Dollar Trading Guide Here