- GBP/USD moves off its low as the Prime Minister’s plans for the next five years are revealed.

The Queen revealed the UK Government’s official legislative plans for the coming year in her speech at the opening of Parliament Wednesday. The speech, written by the current UK Government, outline the Prime Minister’s policies, plans and any additional new laws the ruling party hope to pass. In the speech, the Queen outlined eight new Brexit Bills – including trade, customs and immigration - as the UK starts divorce proceedings from the European Union.

The speech began with the Government stressing that its priority is to secure the best possible deal as the UK leaves the EU and that the government would “build the widest possible consensus on the country’s future outside the European Union.”

The full Queen’s Speech is here.

GBPUSD perked up on the slight nudge towards a ‘soft Brexit’ although the pair’s move to the high of the day was boosted by Bank of England’s chief economist Andy Haldane’s hawkish speech delivered around the same time as the opening of Parliament. In the conclusion of his speech, Haldane warned about tightening monetary “too late.”

“As the balance point between these risks has shifted over the past 9 months, that has left me judging that a partial withdrawal of the additional policy insurance the MPC put in place last year would be prudent relatively soon, provided the data come in broadly as expected in the period ahead.”

He added, “Certainly, I think such a tightening is likely to be needed well ahead of current market expectations.”

Current market expectations are for UK interest rates to be held at their record-low level well into 2018, as inflation continues to probe 3% while average wages stagnate or slip lower.

After hitting an early morning low of 1.25886, GBPUSD recovered to make a high for the session of 1.27049 before drifting a fraction lower.

This move higher however may find it difficult to push further ahead according to the IG Client Sentiment Indicator. The indicator currently shows retail traders are long of GBPUSD and have sharply increased these positions over the last day and week. 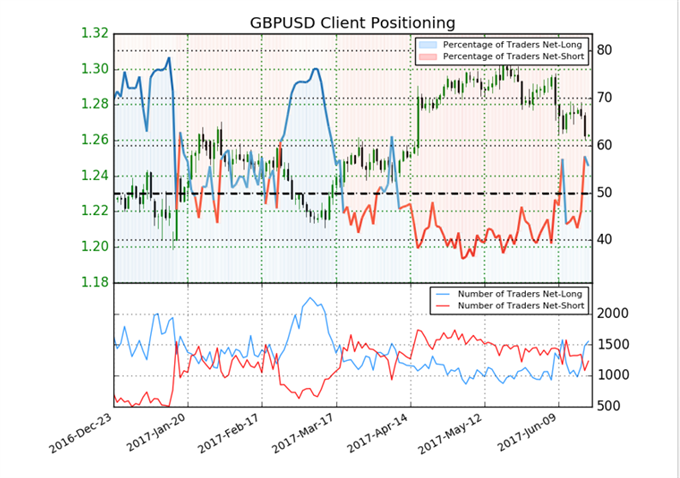 Below the upcoming GBP risk events with tomorrow’s speech by departing Bank of England rate-setter Kristin Forbes of particular note. Forbes has voted for a 0.25% rate rise at the last three MPC meetings, arguing the need to bring inflation under control, a theme that Andy Haldane bought into focus today.