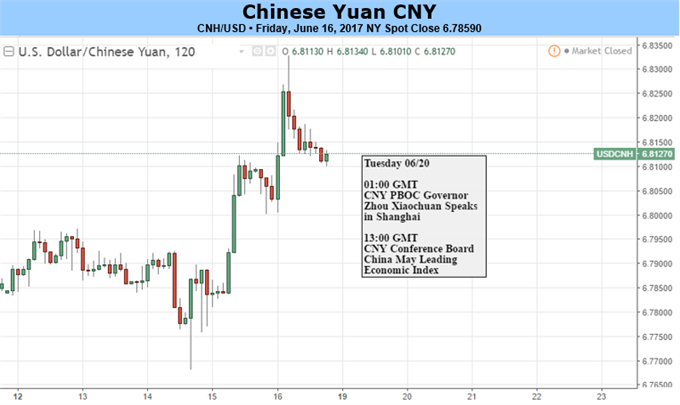 The Chinese Yuan lost against the U.S. Dollar for the second week. The USD/CNH touched 6.8329 before the June FOMC announcement on Thursday, the highest level for the pair (lowest for the Yuan) in two weeks. Yet, the Fed’s faster-than-expected pace to address on its $4.5 trillion balance sheet took the fuel out of the Dollar’s rise; the USD/CNH retreated and tested a key level of 6.81 as of the 3pm ET on Friday. Looking forward, all Chinese markets are all awaiting MSCI’s decision on whether to include Chinese A-shares into its global indices.

The decision is due to announce late Tuesday (June 20th) European time. MSCI has rejected Chinese A-shares’ inclusion three times, from 2014 to 2016. The 2017 proposal has been revised compared to previous versions: if this one is approved, only 169 A-shares will be included, reduced from 448; and the weighting of these Yuan-denominated shares will be cut to 0.5% from the early proposed 1.0%. With these adjustments, the likelihood of A-shares to be added in the MSCI index has increased.

The spokesman of China Securities Regulatory Commission, Zhang Jun, told at a press briefing on Thursday that “China welcomes such an inclusion; any emerging market index without Chinese stocks is incomplete. Yet, this is a business decision to be made by MSCI.”

If MSCI approves A-shares’ entrance, it could have a few immediate impacts: foreign investors’ purchase in Chinese stocks may not increase significantly in the short-term; yet, Chinese retail investors, who are more rely on news and rumors than analysis, are likely rush to buy stocks, similar as what was seen when a special economic zone was launched in April. Also, the global acceptance of Yuan-denominated stocks could add strength into the Yuan rate. The USD/CNH is still looking for a direction; the Dollar weakness driven by Fed’s reducing its balance sheet has lifted external pressure on the Yuan rate. Within such context, a major development in China could lead to a new trend in the pair.

An approval may have longer-term impacts, for instance, to help reduce capital outflows or even reverse the direction of capital flows. China’s foreign reserves is considered to be a measure of the country’s financial power to preserve the stability of its currency. The gauge dipped below $3 trillion in January and then picked up in February and has remained right above the level as of the end of May. It took 39 months for China’s foreign reserves to increase from $3 trillion to nearly $4 trillion in June 2014; over the span of time, the offshore Yuan gained +5% against the U.S. Dollar. And then, it took another 27 months for the holding fell back to $3 trillion; the offshore Yuan lost -12% against the Dollar over the same span of time.