- The weak showing by UK PM Theresa May is causing senior party officials to mull a change at the top of her ruling Conservative party.

- A raft of important economic data and the latest central bank monetary policy meeting may weigh heavily on an already unsteady Pound.

The British Pound has opened the week on the back foot after UK PM Theresa May’s weak election campaign was torn apart in the weekend press, sparking talk of a fresh Conservative leadership battle. With Brexit talks fast approaching, the need for the ruling party to show a united front is vital.

And it is not just a weak political backdrop that is weighing on Sterling as this week’s batch of hard economic data could also point to a weakening UK economy with further problems ahead for Bank of England (BoE) Governor Mark Carney.

On Tuesday the latest consumer price update is expected to show annual inflation remaining at 2.7%, above average weekly earnings growth of 2.1%, and sharply above the BoE remit of close to 2%. On Wednesday the latest UK employment and wages data will be watched closely, with unemployment expected steady at 4.6% while wages growth is expected to nudge lower to 2.0% (ex-bonus) and 2.4% (inc-bonus) still below the prevailing rate of inflation. The post-Brexit economy was driven in part by the UK consumer and any reduction in consumer spending power will have a negative impact on the economy.

Thursday brings the latest BoE monetary policy meeting with all measures expected to be left untouched. The governor’s statement however will be closely parsed to see his explanation of the weak growth – high inflation dilemma and his views on the latest political situation.

Keep in touch with all this week’s important UK economic data, live analysis and trade ideas via the DailyFX webcasts. UK Inflation on Tuesday, Jobs/Wages on Wednesday and the Bank of England MPC on Thursday.

GBPUSD is currently trading around one cent higher than its post-election low and is likely to slip lower unless UK hard data surprise to the upside. One factor in favour of a strengthening British Pound is that the weakening of the Conservatives in the UK elections could lead to a softer-Brexit than originally thought, a positive for the UK currency. On the technical side, cable’s bounce off the 100-day moving average around 1.26300 could provide the first level of support. 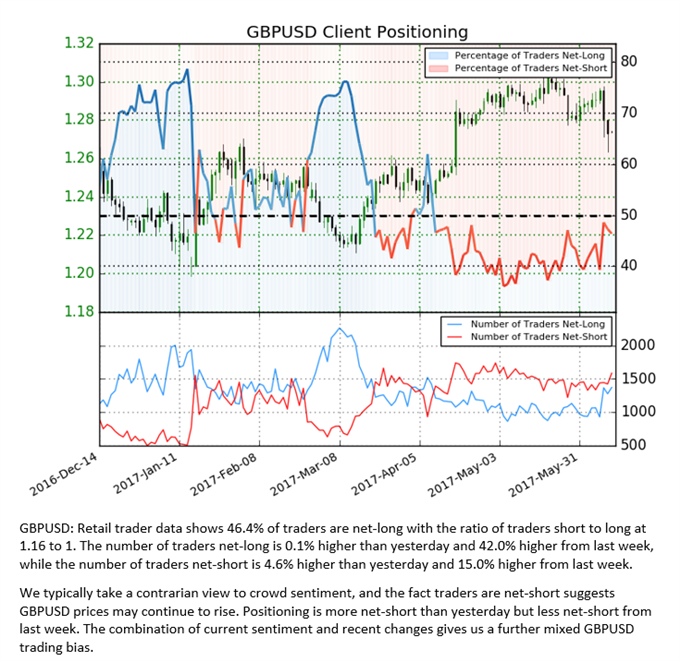