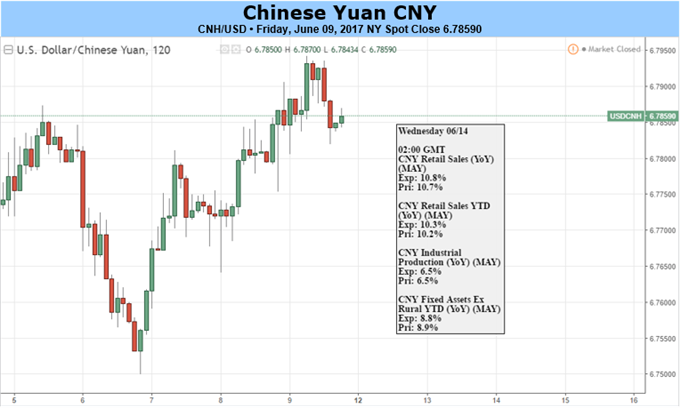 The Yuan pulled back against the U.S. Dollar this week, after it set a 7-month high last week. HIBOR O/N has been falling over the past five days and dropped to 1.8140% on Friday, indicating eased condition on Yuan’s liquidity in its largest offshore market. The spread between the offshore Yuan and the PBOC’s reference rate narrowed as well; it has dropped to about 100 pips as of 4 pm on Friday. Looking forward, event risks from both the U.S. and China will be major drivers to the Dollar/Yuan rate.

On the U.S. side, the Fed is widely expected to raise the benchmark interest rate next week and this is likely already priced-in. A more important question is when and how the central bank will reduce its balance sheet; the answer will greatly impact the Dollar outlook. Currently, the USD/CNH has dropped back to below 6.7974, a level before the U.S. election. Amid the lack of movement along the fiscal policy by the Trump administration, U.S. Dollar’s gains against the Yuan have been wiped out. Within such context, Fed’s decision could become the primary factor to determine the next trend of the Dollar/Yuan rate.

While Yuan’s offshore liquidity is eased, in the onshore market, costs of borrowing the Yuan remain elevated. Since last week, 1-year SHIBOR, Shanghai Interbank Offered Rate, has exceeded both commercial banks’ Loan Prime Rate (LPR) of 4.30% and PBOC’s benchmark lending rate of 4.35%. SHIBOR measures the cost of commercial banks borrowing from each other. LPR is the loan rate that commercial banks provide to its best customers. The PBOC’s benchmark rate is the primary reference rate that the regulator uses to guide the money market. When 1-year SHIBOR surpasses 1-year LPR, a bank will suffer a loss if borrow from its peers and lend out to its best customers. This largely reduces banks’ incentive to issue credit, even to its best customers.

Amid tightened liquidity, a reversed condition is seen in the onshore market compared to a year ago: companies are facing increasing investment opportunities, but find it harder and harder to get cash. The primary reasons for Chinese regulators to tighten onshore liquidity is to curb price bubbles and reduce leverage; both have been set as national targets for the year of 2017. However, growth in investment, particularly in private investment, has been a key contributor to the economy. A lack of funds could drag down the pace of recovery in investment. Next week, China will release the fixed assets investment print for May. The expansion in total investment is expected to slow down to 8.8% from 8.9% in the prior month, according to Bloomberg. The investment gauge can be used as a leading indicator to evaluate how well China has balanced between maintaining growth and curbing financial risks.