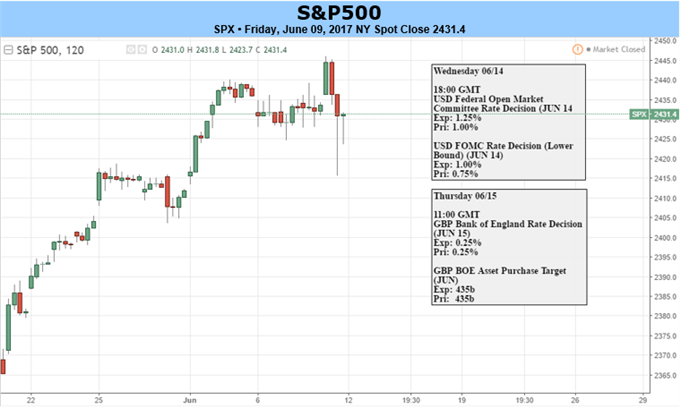 Looking ahead to next week, Wednesday’s FOMC rate decision will take front and center. Expectations are for the Fed to raise its benchmark rate by 25 bps. For live coverage of the announcement, you can join our Chief Currency Strategist John Kicklighter by signing up here. Other ‘high’ impact data to be released next week includes CPI and Advance Retail Sales on Wednesday and U of M Confidence on Friday. For all scheduled events, check out the economic calendar.

Most of the week was relatively tame trading. That is until Friday, then things got wild – real wild for the Nasdaq 100. Goldman Sachs put out a negative report on the top five large cap names in the index, sending them and the index reeling. The Nasdaq 100 was down by nearly 4% at one point before recovering modestly late-day. Net, net, the S&P 500 closed near the unchanged line on Friday, but the fact the market reacted so negatively to a bank report of this nature suggests the broader instability building in the market as it continues to move to new bull-market heights. Recently, we put out a piece laying out reasoning for why a major top may be on its way this year (if the market continues to rise and we see volatility rise as well, it will be another warning sign to add to the list).

The Friday decline halted at the November slope we’ve recently highlighted, and will be viewed as an even more important line of support moving forward. Should it fail to hold and the S&P slip below Friday’s low at 2415 we’ll look for a move down towards the November trend-line. Looking higher, the market has struggled to overcome a top-side trend-line dating back to February 2015; it will need to overcome this line in convincing fashion before it can tack on further gains.

What’s been driving stocks this quarter? Check out our market forecast for details.

Last week, the ECB did little to move the euro and even less to move the DAX. The only ‘high’ impact data slated for next week is the German ZEW Survey set to be released on Tuesday at 9 GMT. For a schedule of all events, see the economic calendar. Depending on how U.S. markets react Wednesday’s FOMC meeting, Asian and European markets could be in for a gap-open on Thursday.

The DAX has been a difficult index to get a grasp on lately, with a turn lower from record highs, break of support at 12700, followed by a recovery back above the 12700 line. Generally chopping trading. More of the same may come our way next week, but there are levels to be on the watch-out for. 12700 could still be influential, but the trend-line extending higher from the French election gap-day low is viewed important in the near-term. Below there the November trend-line could come into play as support. On a move higher, the old high at 12878 is first up as resistance, then the February top-side slope near 12950.

On Friday, the FTSE 100 caught many market participants by surprise when it tacked on over 1% despite the UK General Election resulting in a hung parliament. We must remember though, the stocks which make up the 100 index are mostly multi-national, and thus earn their profits outside of the UK. A weaker sterling price helps boost corporate earnings when the profits are repatriated. A weak currency can be a good thing in this case. Looking to next week’s ‘high’ impact events, CPI will be published on Tuesday, but the big head-liner for the week will be the BoE meeting on Thursday – the day after the FOMC meeting. Volatility could certainly be in abundance with back-to-back major central bank meetings.

The footsie could face a key test of resistance early in the week, as the top-side trend-line extending over from January has ran much interference since the middle of May. A clear cross above and breach of the record high at 7599 will be needed to clear a path higher. Looking lower, should the FTSE drop, there is significant support by way of the 2013 to current top-side trend-line we’ve discussed on many occasions in recent months. It clocks in around 7400. The top and bottom-side lines are keeping the index boxed in, and on that we could be in for another week of jostling before eventually resolving one way or the other.