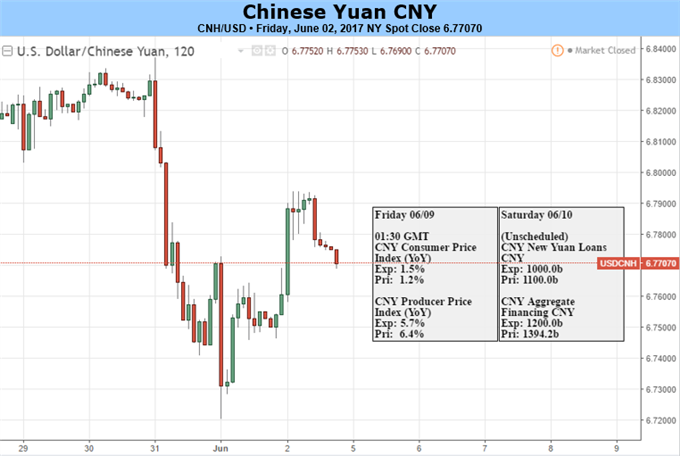 The USD/CNH broke a key support level (resistance for the Yuan) this week, amid tightened Yuan liquidity in the offshore market. HIBOR O/N, Yuan’s borrowing cost in Hong Kong’s interbank market, soared to 42.8% on June 1st, the highest level since January. On Friday, the tightened condition was eased, with HIBOR O/N falling to 8.7%; yet, this is still considerable higher than 3.4%, the average rate over the past 12 months. Next week, Yuan’s funding cost, PBOC’s guidance as well as a heavy Chinese economic calendar will all weigh on Yuan rates.

A sudden elevated Yuan’s borrowing cost can help to squeeze out Yuan shorts as it becomes more expensive for traders to sell the currency; the USD/CNH dipped 6.7205 on Thursday amid a 5-month high HIBOR. However, this does not mean the Yuan can hold at such strong level for long; Yuan’s strength driven by unusually high borrowing costs could fade quickly when HIBOR drops and returns to its normal range.

Also, note that Yuan’s reference rate, set by the PBOC, maintained above 6.80, despite that the Yuan jumped against the U.S. Dollar in the offshore market. On Friday, after the funding cost for the Yuan began to drop, the offshore pair moved towards the guided level. As of 4:30pm ET, the offshore Yuan is about 300 pips away from the Yuan fix. Next week, PBOC’s reference rate will continue to be a key indicator that can largely impact the next trend of the USD/CNH.

Event risk from home is likely to motivate waves in Yuan rates as well. China will release exports and imports prints for May next week, both of which are expected to expand at a slower rate according to Bloomberg. China’s Premier Li Keqiang visited Europe this week and met with German Chancellor Merkel and EU leaders, sending out a signal that China would like to promote free trade and investment. As the U.S. becomes less engaged, China is shifting to strengthen ties with other partners; China’s One-Belt, One-Road initiative serves this purpose. Yet, there are still tasks to work on: during the EU-China summit, the two parties have not reached a final deal on China’s steel overcapacity issue despite that “differences are narrowed”.

At the same time, China may face rising pressure from the U.S. again, amid U.S.’s increased deficit with China. Speculation on a trade war between the U.S. and China soared in early this year but was curbed after Trump-Xi meetings. However, as the U.S.’s deficit with China widened, discussions on China’s trade practices may rise once again. According to U.S. Census Bureau, the deficit with China rose $4.2 billion to $81.9 billion in the first quarter.

Next week, China will also release the foreign reserves read for May. The gauge is considered to be a major indicator that measures the country’s financial power to preserve the stability of the currency. On Friday, China’s FX regulator (SAFE) released an announcement, seen as a move to further strengthen oversight on capital flows: beginning on September 1st, Chinese banks are required to report to the regulator on card holders’ overseas withdrawals or transactions with an amount exceeding 1,000 Chinese yuan or equivalent. Since December 2016, SAFE has strengthened regulatory oversight, in the effort to crack down money laundering, tax avoidance and shadow banking, including a series of inspections on Bitcoin trading platforms. These moves may also help to slow down the decline of China’s foreign reserves, which is right above $3 trillion as of the end of April.