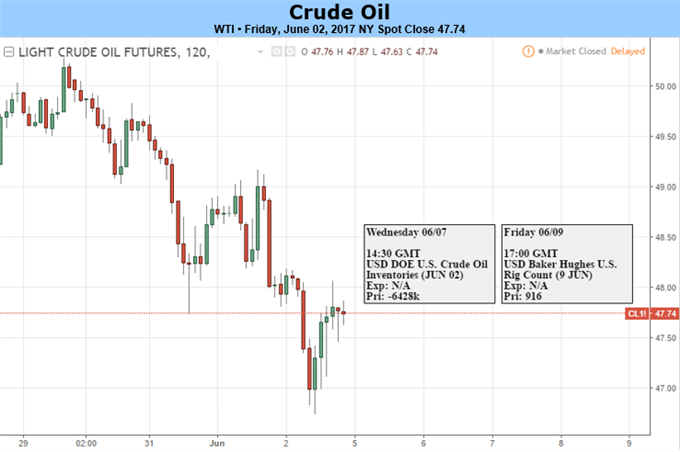 Oil Price is Not Dictated by OPEC, Market Conditions and Demand Guide

Fundamental Forecast for US Oil : Neutral

What do the DailyFX Analysts forecast for the technical and fundamental direction for crude oil through the end of the second quarter? Download the forecast for commodity on the Trading Guides page.

Jawboning by key crude producers is paradoxically acting to reinforce their waning influence over the direction of the market. So, if OPEC isn’t at the wheel, who is? More elemental forces. Looking back over recent months, there have been a number of overt attempts by the Organization of Petroleum Exporting Countries to add momentum for a bid to break $55 and then a desperate attempt to keep the market from sinking back below $50. Neither proved fruitful. And, as the tide overtook the effort, the overtures grew more dramatic – which in turn made the loss of influence that much more pronounced.

These past few weeks, the oligarchy attempted to use a strategy that had served it well before and then moved on to pulling out the speculative stops. Back at its May 25th meeting, OPEC and key non-OPEC members had defied what was previously thought impossible when it was announced that the collective had agreed to extend production cuts by an additional nine months. As impressed as the oil ministers were, the market shrugged with an immediate dive for oil prices.

Just this past week, officials attempted to go back to the root of their success with manipulating price on the supply side of the equation: spurring speculation. Rather than seeing the actual changes realized, the market can hold greater regard for speculation of change into the future. While there are reasonable limitations as to what groups like this are going to be able to agree to, the collective’s appetites can stretch beyond those bounds and offer more lift. It was suggested by sources that the idea of an additional 1.0 to 1.5 percent output cut was floated at last month’s meeting and this option could be revisited because of the pullback in energy prices. To this, the market offered the same lack of interest.

There are multiple points of struggle when it comes to manipulating the price of oil through pulling the supply-demand strings going forward. While OPEC and its large, cooperative counterparts can represent a significant portion of the world’s total production, there are willing candidates in the wings to fill any gaps that arise. The United States’ shale oil boom in particular has played a significant role here. What’s more, the Trump administration’s decision to pull the country out of the Paris Climate Accord has led to some belief that energy production could rise in response – perhaps anticipating increased consumption for mid-grade fuels.

That said, regardless of the ups and downs in output, demand is not so readily altered. PMI figures as of late have offered a course affirmation, but a strong surge in expansion for any individual consumer – much less many – is not a practical forecast. Further, the response from some of the world’s largest companies in to the US withdrawal from the Paris Accord vowing to pursue renewables only acts to undermine the long-term path of this finite asset.

In more measured terms, the docket through the coming week will tap upon critical themes – global monetary policy, political pressures, growth – but these events are unlikely to alter the course for crude. Expect possible jolts from any significant supply-side changes from the US or truly aggressive jawboning efforts from a key OPEC official moving forward, but lasting trends will be difficult to motivate. That isn’t just an oil trait however. Trends are rare beasts in markets nowadays.