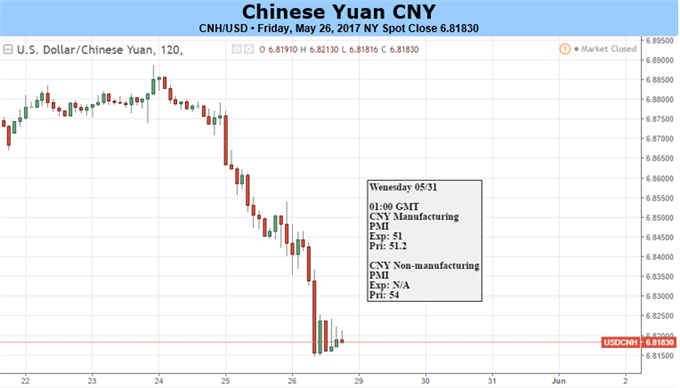 The USD/CNH broke below 6.8436, a key support level (resistance for the Yuan) on Friday, following CFETS’s announcement that a “counter-cyclical factor” will be added to the calculation of Yuan’s daily reference rate against the U.S. Dollar. CFETS, with a full name of China Foreign Exchange Trade System, is a division run by the PBOC. According to the statement, introducing such a factor will help the Yuan exchange rate to better reflect Chinese fundamentals and reduce the risk of overshooting. Next week, China will release both the official and Caixin manufacturing PMI prints for May. Under the revised reference rate mechanism, these key economic indicators could have greater impact to Yuan rates than before.

Let’s take a closer look at the fixing mechanism first. This is not the first-time that Chinese policymakers change the Yuan fixing formula. On February 20th, the PBOC reduced the reference period of Yuan trading against basket currencies, a move that is considered to reduce the impact of interday moves in the U.S. Dollar to Yuan reference rates. The revision released on Friday serves a similar purpose according to CFETS’s statement: to reduce the excess volatility seen in Yuan rates caused by Dollar moves. The adjustment may also help to curb one-way bet on the Yuan, for instance, despite that “the Dollar weakened and China’s economic indicators improved”, “the Yuan still depreciated” based on the old fixing calculation approach.

CFETS’s statement confirmed a suspicion that the Chinese regulator saw additional strength in the Yuan and guided it stronger through the reference rate. Yet, the question is whether the regulator sees the Yuan’s current level to have fully reflected Chinese fundamentals. On one hand, the Yuan fixing was little changed on Friday and set to be 6.8698, which is roughly 500 pips weaker than the offshore Yuan as of 3pm ET. On the other hand, Yuan’s overnight borrowing cost in Hong Kong continued to rise on Friday, to 7.7565%, meaning the cost of shorting the Yuan was elevated. Amid these mixed signals, China’s manufactures’ conditions could have considerable influence on the outlook of the Yuan.

Both the official and Caixin manufacturing PMI reads are expected to drop in May, though remain in the expansion territory (above 50), according to Bloomberg. The gauges could impact Yuan rates directly. More importantly, these will be the first batch of key indicators to be released after the counter-cyclical factor is introduced; how the central bank would interpret the economy through the reference rate is worth to keep an eye on.

In addition to the Dollar/Yuan rate, the Bitcoin/Yuan is in the spotlight as well. The pair paused its record-setting run this Thursday and retraced around the 261.8% extension level of January drop. With expectations that more Japanese retailers will accept the digital currency as a payment of method, the retracement seen in Bitcoin pairs (BTC/CNY and BTC/USD) might be only temporary. However, don’t forget a major risk coming from the SEC, the pending decision on Bitcoin ETFs. The Bats Exchange that wants to list the ETFs faces considerable difficulties to reverse SEC’s initial denial decision and the door for the petitioner to provide additional evidence to justify itself has been closed on May 15th. 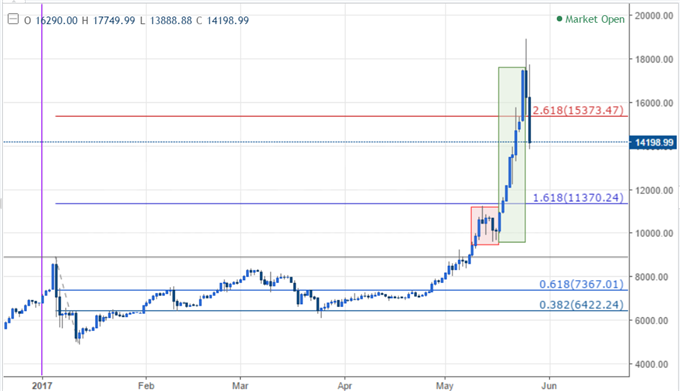