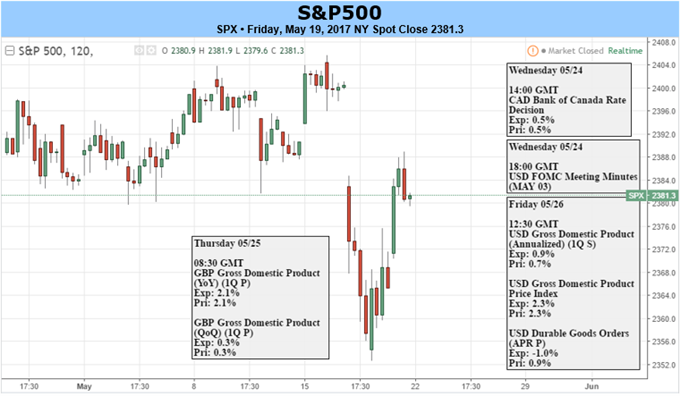 In terms of economic events this week, the calendar holds the FOMC minutes on Wednesday from the earlier-month meeting. Last month the March minutes sparked a surprisingly large sell-off in the market. Perhaps we won’t see a repeat of extreme volatility in either direction, but nevertheless traders should be prepared. Headlines out of Washington regarding the Trump situation could certainly be a driving factor in the week ahead. Other key scheduled events are Advance Goods Trade Balance on Thursday and Q1 GDP on Friday. Friday trade may thin out early as market participants get a head start on Memorial Day weekend; U.S. markets are closed the following Monday.

On Wednesday, the S&P broke sharply and in the process took out key support around 2380, which ended the neutral to bullish bias held through the consolidation period dating back to the end of April. The market fell into the April 24 French election-induced gap, but didn’t quite fill it down to 2348. The final two days of the week produced a strong rebound to settle out around the key 2380 level and beneath the November trend-line.

The feeling is we will see another stab lower from resistance, and perhaps to a new low towards support in the vicinity of 2322/29. If, however, the Thursday low can hold then the market may build towards trying to reach up to a new record high. The Wednesday gap is a glaring hole the market may make a serious attempt to fill if trade can maintain in the 2380s in the early part of the week. 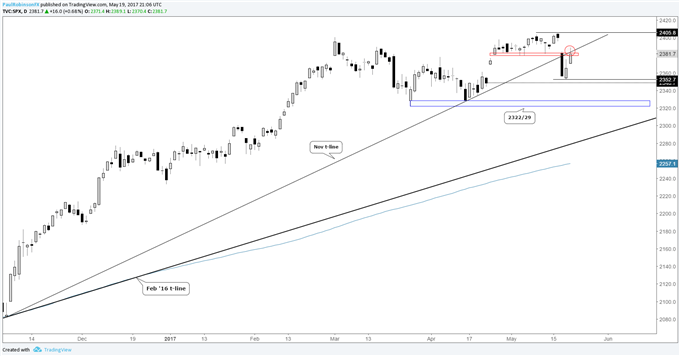 Find out what’s driving equity markets this quarter, check out our Q2 forecast.

Looking ahead to next week there isn’t any ‘high’ impact economic events scheduled for Germany or the Eurozone, however; on Wednesday, the FOMC will release its minutes from the meeting earlier this month. To refresh what happened at the April 6th release of the March minutes, the S&P 500 dropped sharply which carried over to a gap lower in global markets the following morning. We may not see a big reaction this time around, but as stated earlier it’s best to be prepared for any outcome. For a full docket of events, see the economic calendar.

Last week we saw the first uptick in volatility we’ve seen in a while, as the political situation in the U.S. turned toxic. The DAX responded with a sharp break below the February top-side trend-line it had previously been using as support. The break also put the DAX below another short-term level of support at 12660. To end the week the market closed just shy of this level after nearly touching it on Friday. As long as 12660 holds in place on a closing basis the bias remains tilted lower, with 12490 and 12390/75 (old record highs) as support levels. A break above 12660 will bring the underbelly of the February trend-line into focus and potentially the record high of 12842. The thinking is we will see further weakness in global markets, but much of what transpires could depend on headlines coming out of Washington and how U.S. markets respond. 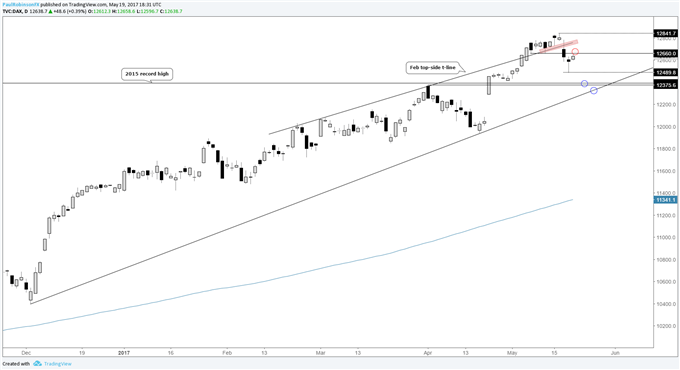 The economic calendar is lacking any ‘high’ impact events this coming week, but as already said in regards to the DAX; the FOMC minutes on Wednesday could have an impact on how Europe opens trade on Thursday.

Turning to the technical landscape, the FTSE is caught between significant support via the 2013 top-side trend-line and the top-side January/March trend-line which capped the advance last week. The 2013 trend-line along with peaks created in March/April and the trend-line rising up from last month’s low will help keep the market buoyed. Should this confluence of support break, though, look for selling pressure to potentially turn aggressive. Turning higher, the Jan/Mar trend-line and record high at 7534 will be our first and only level of notable resistance before treading in uncharted territory. 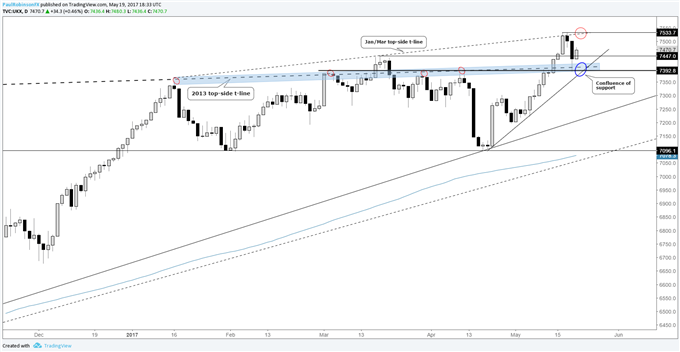