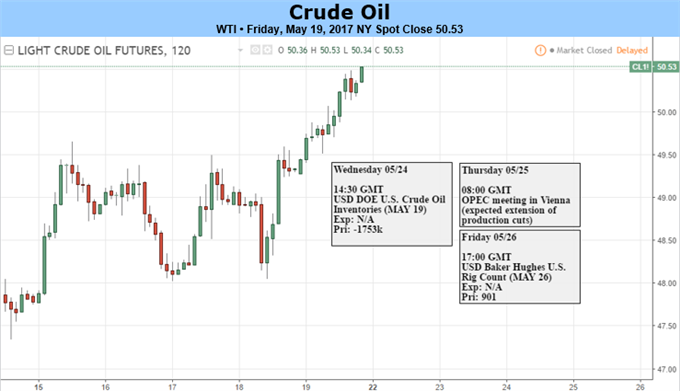 All Eyes on Vienna As OPEC Looks To Lock In Extension

Will OPEC provide Bulls an opportunity in Crude Oil with their market stability plan? See our forecast to find out what our top minds think on Crude!

Crude Oil is looking to close above $50/bbl for the week for the first time in five weeks. Crude has had an impressive run in the last two weeks after what appears to be a washout of regretting long positions, which the CoT report indicated was near record longs. Now, ahead of the OPEC meeting where Russia and Saudi Arabia are said to support an extension cut through March 2018, a nine month extension on top of the original six month agreement, the regret is now likely that the trades were closed out in the first place.

Though Oil is moving higher, the market is still not without its risks. The market seems to be pricing in the best possible case scenario, where a nine-month extension is agreed to with an impressively high level of compliance witnessed in the first round of production cuts. However, the options market shows us this may be wishful thinking. In short ,per a report from Citi, there has been an increase inBrent 2nd-month put skews that likely signal investors with Oil exposure are purchasing downside protection ahead of the meeting. This makes sense as it stands to reason that while OPEC members may agree in principle to a cut, there may be a need to discuss different scenarios that allow Oil producers participating in the production cut to not lose too much ground to US producers. An agreement to extend productions that falls below the 9-month hoped for extension could lead to downside in spot, which is what the options market shows is a concern.

Speaking of US production, there were hopeful signs that the long obedience of OPEC could play out well by supporting the price of crude oil. On Wednesday, the EIA weekly report showed that US stockpiles fell for the sixth week. There remains concern that US supply is undermining the efforts of OPEC, but US production did fall this week for the first time in 13 weeks.

Lastly, the chart of USOil is supportive of further upside after trading as low as 43.79 earlier this month. A positive outcome (i.e., a fully agreed 9-month production extension) and a further drop in US production could lead to the market testing and possibly breaking above the lower higher in April of $53.65. Such a development would likely bring institutional buyers back in aggressively that could further lift crude prices. However, many uncertain variables remain such as will US production stabilize and will OPEC agree to the max extension? 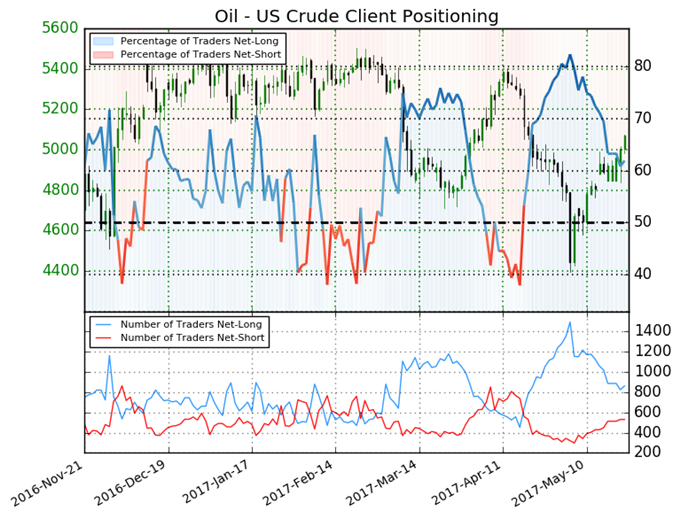 The insight derived from this sentiment analysis on Oil is that traders are jumping on to the short side as longs reduce their positions. This could be a precedent to a bullish breakout that we’ll keep you up to date on if price closes above $50/bl for the week and is combined with a further rise in net short positions.