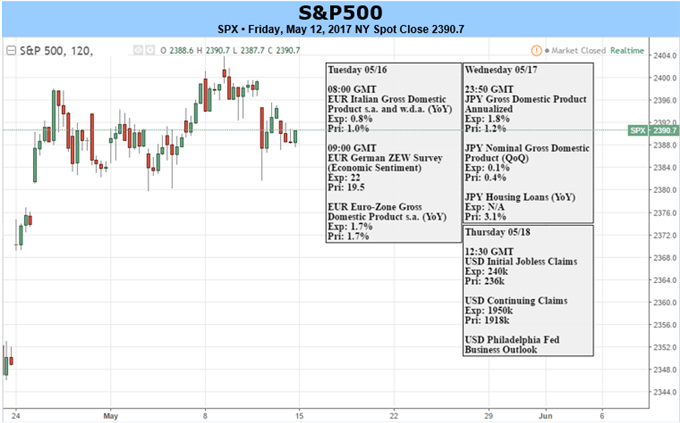 Looking ahead to the coming week the economic calendar is light, with no ‘high’ impact economic events lined up in the U.S. It could make for a technically-driven market – markets can move without a catalyst. For a list of all slated data releases, check out the economic calendar.

Last week the market continued to consolidate gains seen in the latter part of April. With the market hanging around the March 1 high, some are probably starting to think we might be in for a double-top, and we could be. The horizontal price action that has dominated the month so far may turn out to be distribution and in need of only a little shove to get the ball rolling downhill. However, at this time it looks like the less likely scenario, but certainly one on the table. The 2380 level is becoming increasingly important, especially after Thursday’s drop into this level and reversal – it further validated its importance. As long as the S&P maintains above 2380, then a neutral to bullish bias remains intact. A daily close above 2403 should lead to another leg higher. A strong push below 2380, though, and the gap down to 2374 will fill quickly. With a little more selling, the April 24 (French election) gap will then come under fire. That’s a bridge we’ll cross should we see a drop below 2369; the gap then holds 20 handles of downside before filling at 2349. 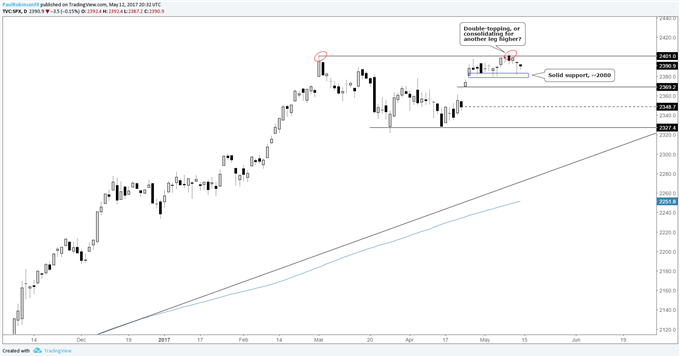 To see what’s driving equity markets this quarter, check out our Q2 forecast.

Looking ahead to event risk next week – we have a couple of key Euro-zone numbers due out on Tuesday, but unlikely to have much impact on European equity markets. The FX/rates markets tend to be more reactive to data releases than stocks. Tuesday holds Italian GDP, as well GDP for the entire Euro-zone. You can check out the details and other slated data releases here.

To start last week, the DAX gapped higher in response to the Macron victory in France. It was short-lived and the market sold off by a modest amount in sympathy with the CAC 40. For the remainder of the week there was little to see, as the market didn’t do much more than consolidate the run dating back to the middle of last month. The DAX spent last week leaning on the February top-side trend-line as support. As long as it holds the short-term outlook is constructive. A drop below will be of some concern from the long-side, but the August top-side trend-line may help keep a bid in the market. Generally speaking, there is nothing about the current technical posturing which warrants a bearish bias. As far as resistance, we’ve run out of levels not only because we are in record territory, but all top-side trend-lines have been exceeded. The beforementioned lines were once viewed as resistance, but have now turned to support. Looking lower, if sellers do show up in earnest and break the sloping lines of support (keep an eye on S&P 2380), a decline could be in store. The first logical spot to look for support comes in at the old highs just under 12400. A break below there and the market is likely in for a serious run at the April 24 gap. This looks like the less likely scenario at this time.

In terms of major economic events it’s a quiet week ahead just as it is in other parts of the globe. The only ‘high’ impact event on the calendar is on Tuesday when April UK CPI data will be reported. See the economic calendar for details and a list of all other events.

Last week was ‘Super Thursday’, but the market’s reaction was anything but super. The BoE made no changes to monetary policy as expected, but did lean on the dovish side. In a quarterly report, there was a downward adjustment in the central bank’s 2017 GDP forecast and an upward revision in inflation expectations. The market reacted to the outcome of the meeting by selling sterling, but did little to impact the footsie. In the end, though, last week was a big one for the market, with a respectable 2% gain once the dust settled on Friday. Perhaps more impressive was the index’s ability to close strongly above the 2013 top-side trend-line we’ve frequently discussed in recent months. The trend-line extending over peaks in 2013 and 2015 had kept upside gains in check on several occasions since January. Then Friday happened. The FTSE put in a record closing high above the trend-line. A break above 7447 will pave the way for higher prices, but as we said on Friday the preferred approach is not to chase the market higher, but rather look to buy on a retracement and hold of old resistance as it turns into new support. As long as Friday doesn’t turn out to be a one-off, we will remain constructive.