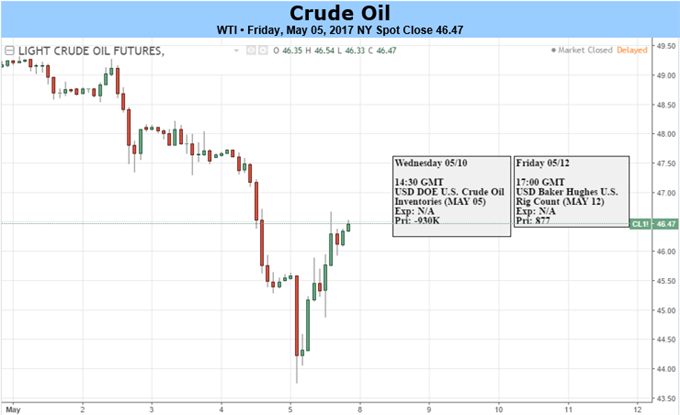 Will Crude Oil be able to recover in 2Q? See our forecast to find out what is driving market trends!

Crude Oil was a big theme of the reflation trade that favored proof of pending economic growth as commodity prices pushed higher in Q4/Q1. The rise in commodities from November to December was backed by what looked to be a perfect storm. In the month of November, a new administration had taken over the White House that was pro-growth in terms of infrastructure and lower taxes. Also in November, the Organization of Petroleum Exporting Countries (OPEC) agreed to cut production to balance the Oil market’s oversupply issue that had caused a sharp crash. Everything seemed to be going great for Oil.

Fast forward to the first week of May and little appears to be going right for the energy commodity. As of Friday morning, Crude Oil has traded 21.3% lower in 2017 from the opening range high of 2017. Some would call this a bear market as evidenced by a 20% drop. However, when you look at the industry alone, there doesn’t seem to be the panic that the price would indicate. We continue to see bullish call spreads being purchased in the options market in anticipation of eventual price recovery despite short-term downside still favored. Also, CEO of Marathon Oil, Lee Tillman recently noted that from a supply and demand point of view, little has changed as the price has plunged.

Still, the price plunge in Oil puts OPEC in an increasingly difficult scenario. They have all-but agreed to extend the production curb until the end of 2017 which in the immediate scenario, reduces their income. Of course, this was done in hopes of balancing the Oil market leading to higher prices, which would allow them to earn more money from a net present value perspective when production resumed to normal levels. However, one ‘stick in the mud’ to OPEC’s plan has been the hedging that took place from US producers when Oil was at $50, which is allowing the to produce freely as the price drops and has helped them lock in ~20% gains given a ~$35 production price per barrel. Adding insult to injury, on Friday afternoon Baker Hughes International showed that active rigs increased in the US (i.e., more production) for the 16th straight week in the US.

The chart below shows Friday’s rebound after the early morning sell-off. However, if you’ve heard the term, ‘dead count bounce’, it’s being put to the test in Crude. In other words, we’ll see what Crude Bulls are made of when we get to the Fibonacci zone (38.2-61.8% retracement) of the April-May range that occupy’s 47.50-50.00 zone. If the price is unable to close above here on a weekly basis, we could be setting up for more declines. 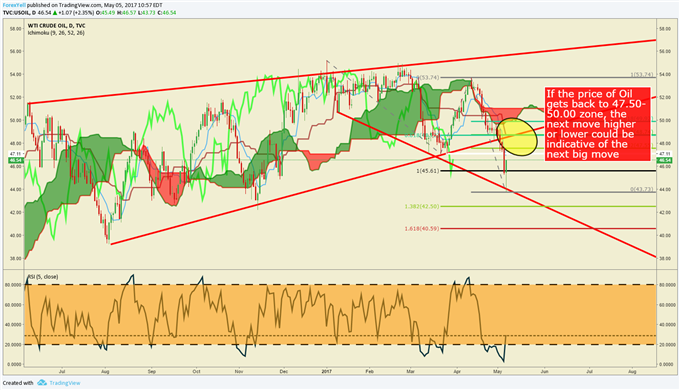