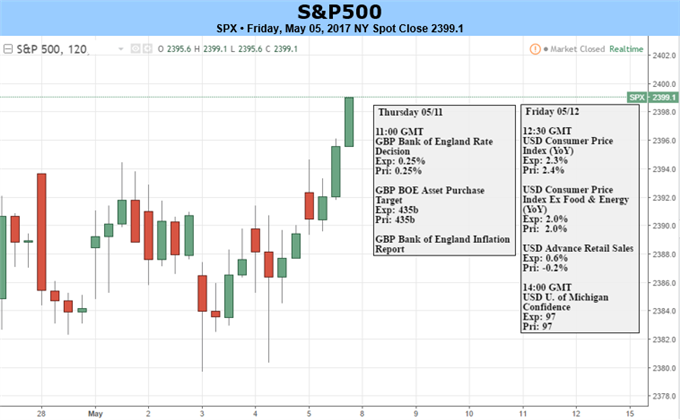 The election. Will we see a Macron victory as expected or a surprise win by Le Pen? In the likely event we see Macron become the next president of France, a gap higher in the CAC is a reasonable expectation – but will it hold if it does? The CAC finished last week with a sharp rally, rising to its best levels since January 2008. The 7%+ run since the Friday before the first-round election is setting the market up for a ‘sell-the-news’ gap on a Macron victory. If the market gaps up and then fills the void it doesn’t necessarily mean the overall run higher will have come to an end, but a short-term retracement could be in order following a ‘euphoric’ rise. If Le Pen wins? The CAC will likely have the hurts put on it as market participants haven’t priced in such an outcome. The sell-off would likely be quite violent.

In terms of scheduled ‘high’ impact economic events the docket in France/Euro-zone is fairly light beyond the election-front. Mario Draghi will be speaking in Dutch Parliament on Wednesday and German GDP is due out Friday morning. For the full line-up of scheduled data events, check out the economic calendar.

Putting the recent run into perspective with respect to the long-term trend; the CAC is trading well above the 2000-2017 trend-line we’ve discussed before. To find substantial levels of resistance we need to go back to peaks formed a few hundred points higher back in 2007. It doesn’t mean the CAC has a few hundred points to go before it will stop rising, but it’s worth noting that not a lot stands in its way if it can maintain the intermediate-term trend. Looking lower, the first level of notable support doesn’t arrive until the 4/24 gap-low of 5228, then the prior swing-high 5140, and finally the full gap-fill from the first-round at 5059. Not likely we’ll see the latter two levels this coming week unless Le Pen wins. 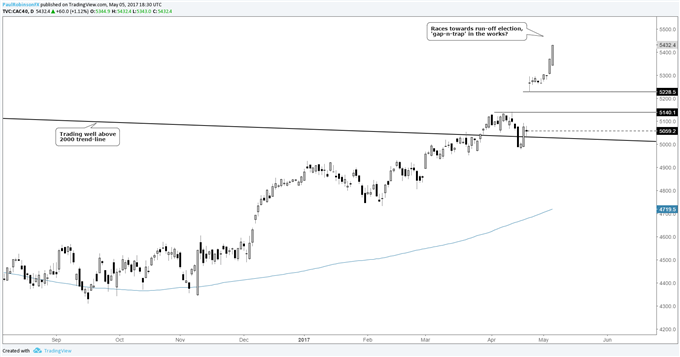 Front and center to start the week will be the outcome of the second and final round of the French elections; Macron is a heavy favorite to win. Will the CAC and risk-on respond positively to the ‘expected’ outcome, or will it be a “sell the news” scenario? We’re about to find out. If Le Pen pulls off the upset, it’s safe to say risk markets will be moving in reverse. Looking beyond the election, ‘high’ impact events include Draghi speaking in Dutch Parliament on Wednesday and the release of German 1Q GDP on Friday. For details and a full line-up of upcoming events, see the economic calendar.

Last week, the DAX made good on the quiet consolidation we noted the week before; rallying with a fair amount of force throughout the week. In terms of resistance, we had a top-side trend-line extending over peaks from August and another top-side t-line running over highs since February; both viewed as minor resistance, and both were treated as such. To finish the week, the DAX closed above the February line, and now leaves us with no ‘official’ form of resistance to operate off of. We’ll now look to those sloping lines as potential support levels. The trend is up, momentum is strong, so there is little to make a case for shorts – market participants will likely view minor set-backs as buying opportunities until we see something suggesting a trend-change is upon us. But before we can think about “normal” technical developments we’ll first need to see what happens in France on Sunday. 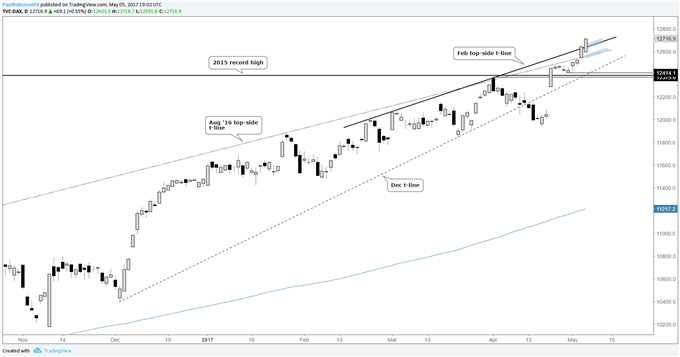 Looking ahead to next week, market participants will be reacting to the outcome of the French run-off election between Macron and Le Pen. The futures market will move on developments in European markets. If Macron wins we could see another gap higher as we did following the first-round results. But as discussed above, the ‘gap-n-trap’ scenario could see the CAC 40 fade long before the US open arrives. If that is the case, overnight futures gains could be erased by the time the US open rolls around. It’s just a scenario at this time, but one we’ll be tracking should things unfold in that direction. If Le Pen pulls the surprise victory, a gap-down and sell-off will likely be in play.

Moving past Monday, the economic calendar is back-end heavy with ‘high’ impact data releases – Friday holds CPI, Advance Retail Sales, and U of M Confidence. As is often the case, the bigger response to any surprise prints in data will likely take place in the FX and rates markets. For a full run-down off all scheduled economic events, see the economic calendar.

The S&P looked poised heading into last week for a break to new record highs, but the consolidation continued all through last week. Under “normal” conditions we would expect the S&P to make good on a breakout as it closed last week just two points shy of the March 1 record high. There is strong support from around 2080 down to 2069 before the market would fall into the 4/24 gap (a scenario we don’t expect at this time). 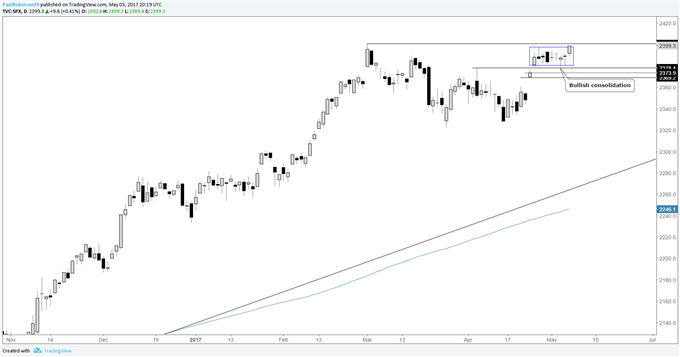