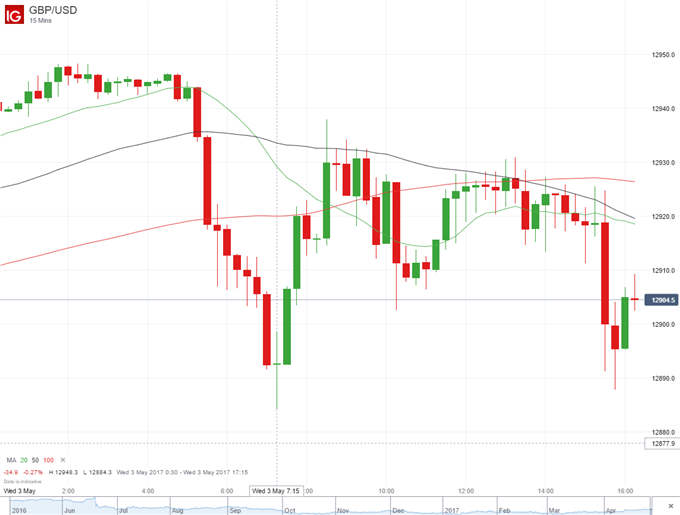 - The British Pound has had a volatile day on more Brexit headlines.

- But GBPUSD continues to knock on the door of that psychologically-important 1.30 area.

The British Pound has had a volatile trading day Wednesday. First was the report in TheFinancial Times claiming that the European Union has raised the UK’s Brexit bill to an upfront payment of up to €100 billion, following a hardening stance from Germany and France.

Then, publishing his Brexit mandate, the EU chief negotiator Michel Barnier said the EU wants a "cordial" Brexit and has no desire to punish the UK, but its “accounts must be settled". He added that the outcome of June's general election – which boosted the Pound on hopes that it will ultimately lead to a softer Brexit – “would not change anything”.

The UK was obstinate in response. “They’ve offered 50 billion… 60 billion… 100 billion… we’ve actually not been given an official number,” said the UK’s Brexit Minister David Davis. “Whilst we’ll meet our international obligations, we’ll meet the legal ones, not the best guesses of the commission.”Asked if a figure of €100billion was acceptable, he replied: "We will not be paying €100billion. We’ve come to end paying vast sums of money every year to the European Union.”

There’s much to-and-froing about the actual size of the UK’s so-called ‘divorce bill’. But the point, for traders at least, is this: the heftier the bill, then the less soft the UK’s Brexit will be, and the more difficult the whole process becomes. So any suggestions that the UK will be made to pay a huge sum to leave the union are seen in Sterling crosses. Indeed, GBPUSD dropped more than 50 pips overnight after leaked reports of last week’s meeting between UK Prime Minister Theresa May and EU Commission President Jean-Claude Juncker suggested a fractious atmosphere to the opening round in Brexit talks, and lost another half a cent in early trading following the FT report.

But the Pound remains strong despite the dips, and cable continues to knock on the door of that psychologically-important 1.30 area which, if surpassed, would signal a mid-term bullish reversal in the Pound against the Dollar.

Brexiters, meanwhile, are banking that the squabbles over the UK’s Brexit bill are just hot air. Ignore Juncker’s petulance, they say. The rest of the 27 EU countries want strong trade links with a strong UK that wants to buy their products and therefore will not risk that relationship. Pound bulls will be hoping they are right.